Today marks Equal Pay Day. How are we doing? We have come a long way since I wrote my doctoral dissertation on the pay gap back in the late 1960s. From earning 59 percent of what men made in 1974 to earning 79 percent in 2015 (among year-round, full-time workers), women have broken a lot of barriers.

There is no reason why the remaining gap can’t be closed. The gap could easily move in favor of women. After all, they are now better educated than men. They earn 60 percent of all bachelor’s degrees and the majority of graduate degrees. Adjusting for educational attainment, the current earnings gap widens, with the biggest relative gaps at the highest levels of education: 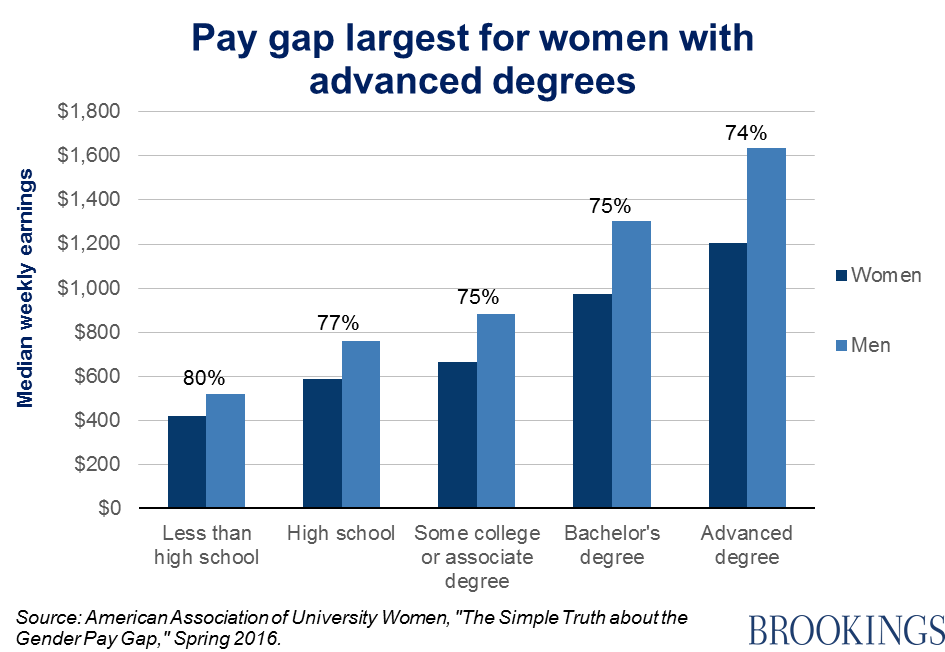 If we want to encourage people to get more education, we can’t discriminate against the best educated just because they are women.

What’s behind the pay gap?

One source of the current gap is the fact that women still take more time off from work to care for their families. These family responsibilities may also affect the kinds of work they choose. Harvard professor Claudia Goldin notes that they are more likely to work in occupations where it is easier to combine work and family life. These divided work-family loyalties are holding women back more than pay discrimination per se. This should change when men are more willing to share equally on the home front, as Richard Reeves and I have argued elsewhere.

But there is much to be done while waiting for this more egalitarian world to arrive. Paid family leave and more support for early child care and education would go a long way toward relieving families, and women in particular, of the dual burden they now face. In the process, the pay gap should shrink or even move in favor of women.

The Economic Policy Institute (EPI) has just released a very informative report on these issues. They call for an aggressive expansion of both early childhood education and child care subsidies for low and moderate income families. Specifically, they propose to cap child care expenses at 10 percent of income, which would provide an average subsidy of $3,272 to working families with children and much more than this to lower-income families.

Paid leave and the pay gap

For present purposes I want to focus on the likely effects on the pay gap. In the mid-1990s, the U.S. had the highest rate of female labor force participation compared to Germany, Canada, and Japan. Now we have the lowest. One reason is because other advanced countries have expanded paid leave and child care support for employed mothers while the U.S. has not: 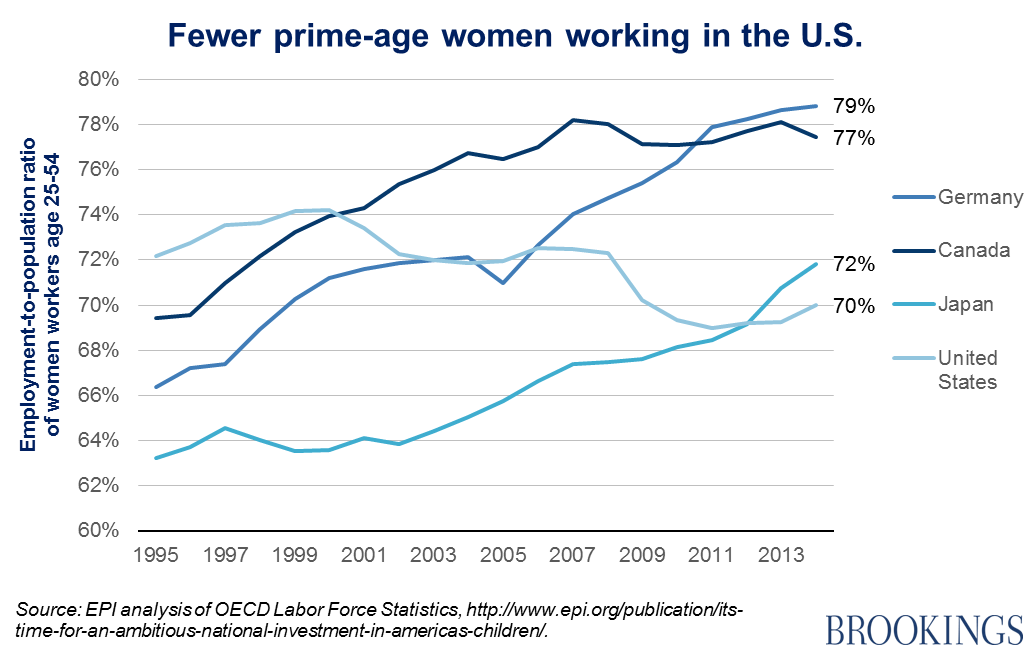 Getting to and past parity

If we want to eliminate the pay gap and perhaps even reverse it, the primary focus must be on women’s continuing difficulties in balancing work and family life. We should certainly attend to any remaining instances of pay discrimination in the workplace, as called for in the Paycheck Fairness Act. But the biggest source of the problem is not employer discrimination; it is women’s continued double burden.