The world has changed, and women have changed. But men have not: or at least, not enough. That’s the argument Belle Sawhill and I made in the New York Times yesterday in a piece headlined ‘Men’s Lib!’ Here’s the short version: a combination of economic and social transformations (feminism and de-industrialization) have rendered the old model of masculinity obsolete. Women have learned to become more like men. Now men need to learn to become more like women. They must adapt or be left behind.

The need for men to adapt is urgent, to improve both their job prospects and their marriage prospects, and to help their children.

Jobs are shifting in a ‘feminine’ direction. The fastest employment growth will be in occupations currently dominated by women. In the 30 occupations expected to have the fastest growth in the next seven years, 60 percent of the positions are currently occupied by women (fastest growing jobs in red): 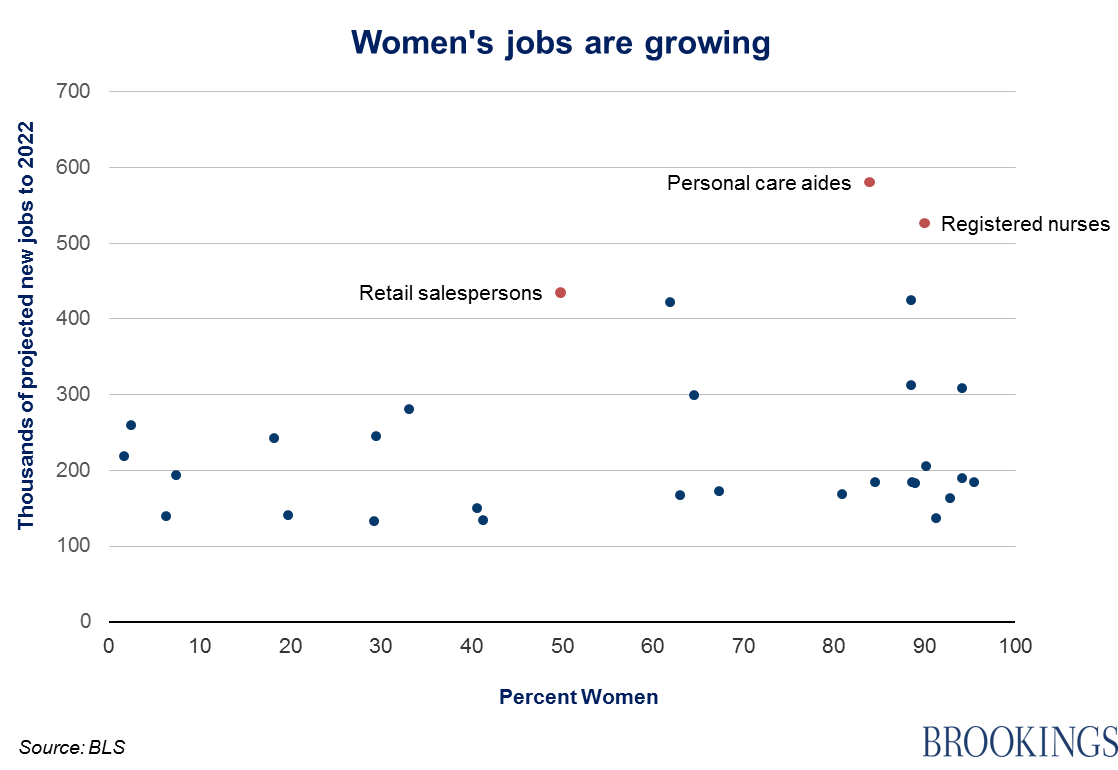 There is no lack of ‘marriageable’ men using old-fashioned definitions, as Belle has shown in her earlier work with Joanna Venator. As they argued: “Weakening earnings among less-educated men have played at most a modest role in the decline of marriage. Shifts in male behavior, and the increased economic independence of women, appear to be more significant factors. Marriage has changed. It is time to change our ideas of marriageability, too.”

Marriages seem to be doing best among college graduates, who are also those with the most egalitarian approaches to the institution, as I’ve written in an Atlantic essay, How to Save Marriage in America. Marriage has become a choice rather than a necessity for women, since they can now earn their own income, or be supported through state transfers. Women are no longer looking for a man to provide for them economically, but for partner and co-parent.

While the traditional male role is collapsing, the need for fathers is becoming clearer. Children raised in single-parent homes do less well, on average, than those from intact families. Boys in particular seem to be vulnerable on this score. Parental investments have become more important in terms of promoting school-readiness. In short, kids need fathers as fathers, not just as wage-earners. If we continue to see men’s role in the family as primarily economic, we risk worsening the family divide.

A movement towards Men’s Lib is a necessary complement to the gains won so far by feminism. But liberating men from traditional roles is not just about equality (though it is about that). It is also about broadening and enriching men’s opportunities—as workers, husbands, and fathers.