President Obama’s initiative to boost opportunities for young black men – My Brother’s Keeper – looks to be a post-presidential plan, as much as presidential one. Valerie Jarrett, his closest aide, said that it was a vocation the president and first lady Michelle Obama will undertake “for the rest of their lives…That’s a moral, social responsibility that they feel will transcend the time that he’s president.”

That is good news, since we’re not likely to achieve something approximating racial justice quickly, given our history. President Obama can and must bend the power of his office to improve the prospects for black Americans, and not least young black men. In almost every conceivable dimension, the gaps between black and white Americans are closer to a chasm.

The philosopher Bertrand Russell wrote that the mark of civilized man was the capacity to weep over a column of numbers. When you look at the data on wealth, health or earnings for black Americans, you get some sense of what he meant.

Many of these gaps coalesce into an opportunity gap, visible from the different patterns of intergenerational mobility for black and white Americans. Obama is today highlighting the plight of black men in particular. Here, from a superb report by Bhashkar Mazumder for Pew, is the quintile transition matrix for white boys and men: 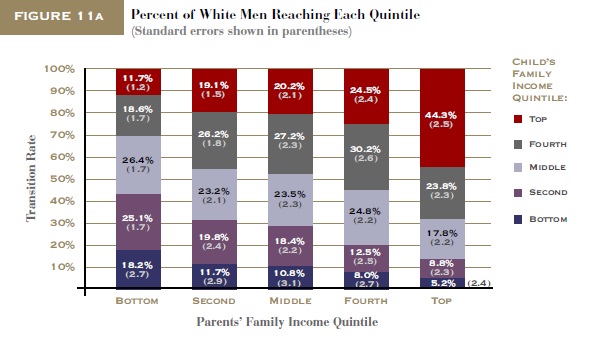 And here it is for black boys and men: 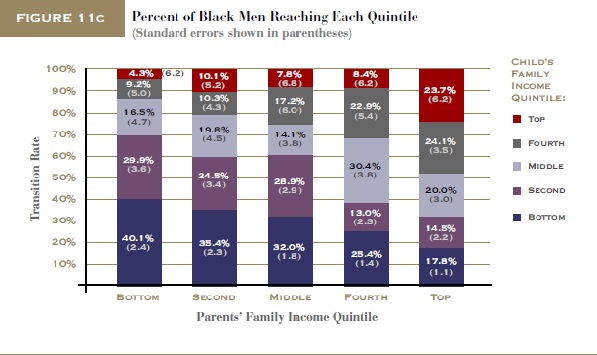 Comparing these graphs is like contrasting completely different societies. Black boys raised in families in the bottom fifth of the income distribution have a 40% chance of remaining there as adults. White boys have just an 18% chance of remaining stuck on the bottom rung of the ladder. (It is worth noting the risks for black women are worse still on this score – at 47%.)

Perhaps even more startling is the difference in the risks of downward mobility from the top. While 44% of white boys raised in the most affluent quintile stay there as adults, only 24% of black manage to stay on the top rung. Eighteen percent of black boys fall all the way from the top to the bottom of the income ladder – compared to just 5 percent of white boys.

As I say, a long road ahead. But history shows that many Presidents do much of their best work when the Oval Office door has closed behind them. Perhaps Obama will only feel able to tackle the race issue – and especially the plight of too many black youngsters – that continues to disfigure American society as the first former black President.