Americans love a good Cinderella story… except when it comes to their own marriages. It turns out that if Cinderella had been born in modern-day America, she would be much more likely to marry the butler than she would the prince. A recent NBER paper finds that Americans increasingly practice “positive assortative mating” when picking their spouse. That is to say, “like marries like:” people marry those with similar incomes and educational backgrounds: 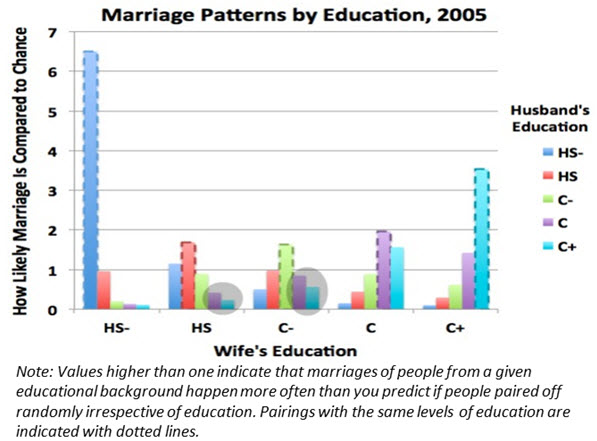 The implications of assortative mating for income inequality are greater now than they were in 1960. This is largely because of the rise of women in the workforce. Since women in 1960 were less likely to be working, a wife’s education level contributed less to gaps in household income levels. Nowadays, a college-educated couple has two high salaries, making the gap between their household’s income and a less-educated couple’s income widen substantially.

Assortative Mating is Not a Problem (In Itself, Anyway)

It’s not surprising that most people want to marry someone whose background and lifestyle is similar to their own. Indeed this is probably cause for celebration, particularly if shared backgrounds and interests result in a stronger and more stable relationship.

But what if this tendency to pick a similar life partner exacerbates inequality and gaps in opportunity? The process might be benign, but the implications less so.

3 Ways Assortative Mating Could Be a Problem for Social Mobility

The links between more positive assortative mating and income inequality are fairly clear, but there hasn’t been much direct evidence linking these trends to less intergenerational mobility. There are three related gaps that matter for mobility, each of which could potentially be exacerbated by “like marrying like”:

One UK study is at least suggestive of a link between mating and mobility.Looking at variations in mobility over time, the researchers find that intergenerational mobility is higher when only fathers’ income is used to predict a child’s future income, rather than household income (which included mother’s income, and therefore reflected the increase in women’s labor force participation since the 1960s). The hypothesis? “The changing influence of mothers’ [income] may be driving some of the observed change [in mobility], and more so for daughters than sons.”

Nobody is likely to propose a random marriage lottery to pick our spouses for us. But we should take a harder look at how assortative mating affects a different lottery—the “birth lottery.” Assortative mating is a fact of life: but if it also contributes to the opportunity gap, there may be an argument for greater efforts to level the playing field a little.