The U.S. is not a meritocracy. As Kimberly Howard and I point out in our new paper “The Glass Floor,” there are plenty of smart, low-income kids who remain stuck at the bottom of the income distribution as adults—and plenty of less-smart, better-off kids who remain on a high rung of the ladder.

This is not to say that skills don’t matter. In fact, skills matter a lot. We compare the mobility patterns for adolescents in the top and bottom third of scores for smarts (using a cognitive test) and those scoring high or low on a widely-used measure of “drive” or persistence (using a coding speed test). 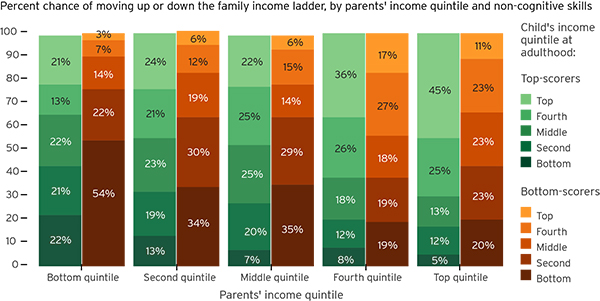 It is also clear, however, that being born to the right parents remains a smart move. Low-scoring teens on the “smarts” test born into the top income quintile have a 22% chance of remaining in one of the top two income quintiles as an adult—compared to 8% of the equivalent group raised in the poorest quintile. It seems that affluence insulates individuals from the risks of downward mobility, even when they are relatively low-skilled.