The influence of parental background on future earnings varies according to which metropolitan area you live in. That’s the message of the Harvard economists behind the Equality of Opportunity Project, who have spent years analyzing millions of IRS tax records. (Earlier this week, Brooking scholars enjoyed a presentation from Nathaniel Hendren, one of the authors).

Children born to low-income parents in Salt Lake City, for example, are much more likely to earn high incomes as adults, compared to children born to low-income parents in Atlanta regardless of the parent’s race. After examining the multiple correlations between the characteristics of metropolitan areas and their economic mobility outcomes, the Harvard team tentatively concludes that levels of neighborhood segregation, school quality, and single-parenthood in a metro area seem to matter most for kids’ eventual earnings (in the latter case, even to those born to married couples but in areas with large numbers of single parents). Those factors, in turn, may impact children’s life chances by influencing their behaviors and values; determining their parents’ access to good jobs and social services; and affecting levels of social capital, trust, and community engagement from which families may benefit.

Of course it is very difficult to identify and rate the importance of these problems as causes of economic hardship, both because these concepts are hard to measure, and because people are not usually randomly assigned to neighborhoods. Crudely, is it people making the place, or the place making the people?

But schools certainly count. Most children are assigned to public schools close to their home. So, racial and economic housing segregation causes racial and economic school segregation. Because more effective teachers are disproportionately found in schools near affluent neighborhoods, black, Hispanic, and poor children attend worse schools. The figure below, taken from a Brookings report I wrote last year, shows that the average middle/high-income student (meaning family income is too high for federal free or reduced lunch program eligibility) attends schools that rank in the 61st percentile on statewide exams, compared to the 40th percentile for poor students: 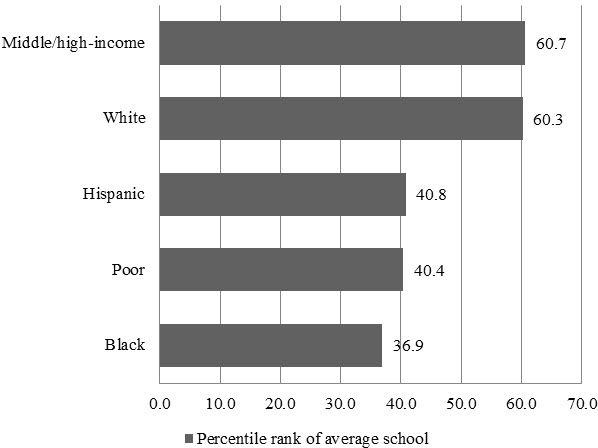 To address these quality gaps, reformers have introduced alternatives to the neighborhood school in many cities. Competition for space means that children are sometimes assigned schools based on a lottery, which allows researchers to see clearly how school quality affects student success.

The evidence is in. School quality is hugely important, not only to school-based outcomes like grades and test scores, but also future outcomes like the probability of going to college and the level of eventual earnings. So there may be a range of factors explaining geographical variations in mobility, but one thing is clear: Children born to poor families succeed at higher rates when they attend good schools. Hence, place matters.