In the wake of the COP21 international climate negotiations that culminated in the Paris Agreement to limit global temperature rise, the Obama administration looked to its Clean Power Plan (CPP) as the centerpiece of its emissions reduction approach. But with the recent Supreme Court “motion to stay,” the CPP is at a temporary halt. As the CPP makes its way through the courts, it is important to consider an alternative and achievable policy that can help the U.S. meet its long-term climate commitments under the Paris Agreement. 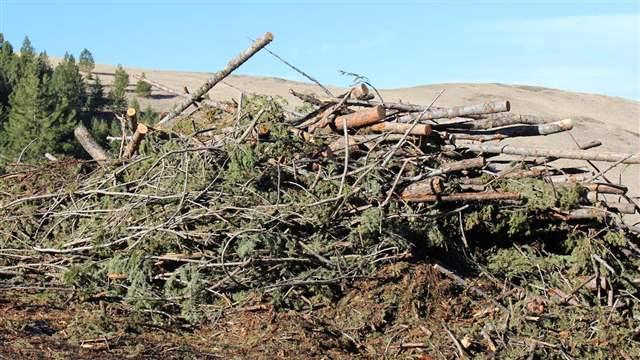 In fire prone forests like those on the reservation of the Confederated Salish and Kootenai Tribes, woody debris left after forest thinning or other forestry operations is normally piled and burned to eliminate it as potential hazardous fuel. (NARA Photo)

Is redefining renewable biomass the answer?

One solution that has the potential to substantially curb greenhouse gas (GHG) emissions is a change in the Energy Independence and Security Act’s (EISA) definition of “renewable biomass.” Renewable biomass is an energy source that can be used for heat, electricity or to power transportation through its conversion into liquid fuel, known as biofuel. Energy from biomass represents close to half of all renewable energy production. In practical terms, the Food and Agriculture Organization of the United Nations defines biomass as live or dead organic matter. But, for legal purposes, biomass can have much more specific definitions.

Since 2004, either federal law or the tax code has incorporated 14 different biomass definitions. EISA’s definition of renewable biomass determines what raw materials qualify for credits known as Renewable Identification Numbers (RINs). RIN credits serve as a compliance currency for fossil fuel producers to buy or sell to meet their annual renewable fuel obligation. Today, EISA’s definition contains several biomass sources, but the one with the greatest potential for solving multiple environmental challenges is tied to woody debris from forestry operations. Unfortunately, the specific biomass definition that qualifies for RIN credits is woody debris that originates “… from non-federal forestland including forestland belonging to an Indian tribe or an Indian individual …” This limits the more than 251 million acres of national forestland that could provide  additional woody debris into the renewable fuel stream.  A small tweak to EISA’s language can ascribe RIN credits to renewable fuel derived from woody biomass that originates across all lands. An all-lands approach that expands the amount of biomass that qualifies for RIN credits can offer a pathway to GHG emission reductions, greater innovation in low carbon fuels, and stronger support for U.S. Native American communities.

One solution that has the potential to substantially curb greenhouse gas (GHG) emissions is a change in the Energy Independence and Security Act’s (EISA) definition of “renewable biomass.”

What are the policy outcomes for a resilient, low-carbon and prosperous future?

Emission reductions: Increasing the economic value of biomass can reduce emissions and wildfires by promoting forest fuel reduction. Today, markets for forest residues are largely undeveloped, so the biomass is waste that is commonly disposed of by burning. The ability to retrieve the monetary value of RINs from biomass removed from federal lands will encourage additional forest thinning to curb catastrophic wildfires, GHG emissions, and improve the environment. The potential for impact is substantial; about 4-6 percent of the continental U.S.’s annual emissions come from forest fires, and healthy forestlands can sequester approximately 12 percent of the national emissions annually. Through the expansion of forest thinning, a larger fraction of our forestlands can become more fire resilient. The receipt of RIN credits from renewable fuel generated from all forest lands could motivate more fuel reduction efforts by offering a new stream of monetary support.

Innovation in low-carbon fuels: The growth in available feedstock that qualifies for RINs can contribute to attainment of national biofuel and renewable energy production goals. Biofuel production benefits from economies of scale. Substantially increased supply of biomass will promote further investment to encourage the development of more renewable energy. Under EISA’s Renewable Fuel Standard (RFS), cellulosic biofuel producers have chronically fallen short of the mandates; this year 230 million gallons of cellulosic biofuel is ordered to be blended with transportation fuel.

The proposal to redefine biomass to include federal lands can only help cellulosic biofuel producers meet their RFS mandates. Investment and growth of the cellulosic biofuel industry has been slow to develop for several reasons, including biomass supply risks. Access to one of the nation’s largest potential sources of forest biomass — federal lands — will lower the cost of RIN-eligible renewable fuel. Biomass generated from an incentivized-expansion of forest thinning activities on federal land would reduce supply risk and fire risk. The 2.2 million tons of woody biomass made available through collaborative efforts by the Forest Service last year is modest compared to the amount needed to restore fire-resilience in federal forests. By offering producers an expanded supply of biomass, there is greater incentive to invest in the infrastructure necessary to increase biofuel production.

While the Clean Power Plan is a comprehensive policy to help the U.S. do this, a more immediate approach could be a small policy change in EISA’s definition of renewable biomass.

Support Native American communities: RIN credits linked to federally-sourced biomass can enhance partnerships between the U.S. government and tribal nations. Tribes have special access to active management of federal lands. The Tribal Forest Protection Act (TFPA) is one mechanism that enables tribes to manage adjacent federal lands in partnership with federal entities. The TFPA empowers tribes to partner with public agencies to protect their own landscapes from environmental threats originating on adjacent federal lands. Forest fires in federal forests pose a real threat to tribal nations. In 2003, nearly 20 Indian reservations were overwhelmed by wildfires that originated on federal lands. In August 2015, President Obama issued a wildfire disaster declaration in Washington State that included four tribes.

Is program manager for the Northwest Advanced Renewables Alliance Tribal Partnership Program, while pursuing an independent Ph.D. from the Graduate School at the University of Washington

Is head of the Tribal Forestry Department for the Confederated Salish and Kootenai Tribes of the Flathead Reservation, and board chair of Salish Kootenai College

Is a natural resource policy student in the Northwest Advanced Renewables Alliance Tribal Partnership Program, pursuing a Masters of Public Affairs at the University of Washington’s Evans School of Public Policy and Governance

Budgetary constraints for tribes and their federal partners have hindered TFPA progress. By allowing woody debris from federal lands to be included in the RIN program, the new biomass markets could generate revenues that help tribes and federal partners implement more active management projects with less public funding. Additional land could be treated, the resilience of federal and tribal forests could be improved, and the environmental threats from climate change could be reduced across landscapes. This would also allow tribes to use RIN value to catalyze economic development and employment opportunities. 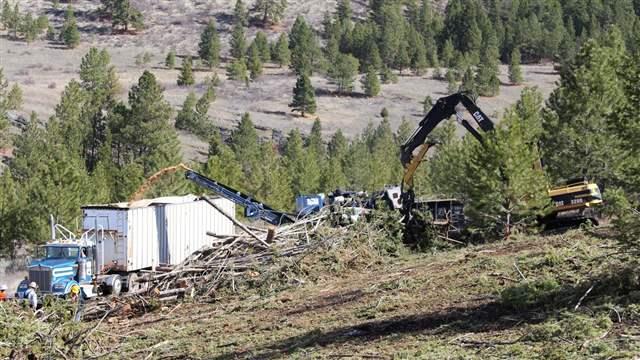 Woody waste generated from forest restoration and timber harvest on the reservation of the Confederated Salish and Kootenai Tribes is being chipped and hauled to a processing facility to be turned into jet fuel as part of the USDA-funded NARA project. (NARA photo)

All three of these benefits show how a simple change in policy can create larger scale cross-jurisdiction cooperation to address climate change. The Paris commitment calls on the world’s nations to pursue sweeping changes to reduce greenhouse gas emissions. While the Clean Power Plan is a comprehensive policy to help the U.S. do this, a more immediate approach could be a small policy change in EISA’s definition of renewable biomass.