I spent the past week in Bangladesh, visiting the countryside on a fascinating and heartening trip from the country’s massive capital, Dhaka, to the south, a region being hammered by climate change. I came to give some speeches and took the opportunity to see for myself how foreign aid and local sweat and equity are being used to fight the rising seas in a country so low that 30 million people may become refugees. For them to secure a livelihood in their home places, the developed countries need to be engaged, with our resources, our hands, and our minds. We simply cannot afford not to be here. 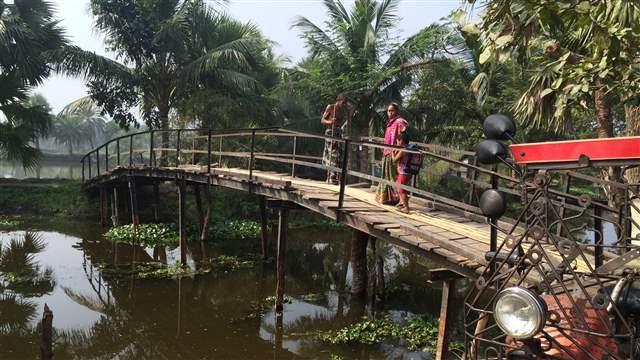 After being asked for years to come, I’d finally made the trip to attend the 2nd annual Gobeshona conference, a gathering of researchers seeking to understand the reality and best policy and actions Bangladesh and other vulnerable countries can take in the face of rising seas, intensified cyclones, saltwater intrusion, fatal heat waves, and droughts. Bangladesh, with its 180 million people living on an ancient river delta, is extremely vulnerable to climate change, and has become a national laboratory for how we all are going to cope. As Dr. Saleemul Huq, who leads the International Centre for Climate Change and Development (ICCCAD) and is a world leader on adaptation, puts it, “if you want to see what climate change looks like, and more importantly, what tackling it looks like, you must come to Bangladesh. What will happen to the rest of the world tomorrow is already happening there today. The rest of the world can therefore learn from Bangladesh how to tackle the problem.”

In 2015 we saw how the influx of 1 million refugees from Syria has challenged the whole European Union system, and taxed resources and cultures across the region to keep their doors open. Imagine the disruption that might come from 30 or 300 million climate refugees if emissions are not controlled and poor nations’ needs are not addressed. Migrants are likely to follow past patterns of movement. First, they will try stay in their homelands, and if they have to move, they will seek to move to cities as close as possible to their homes, so they can remain in touch. When they get to cities, they will be forced to live in shantytowns and other “irregular settlements,” in shacks often built on precarious land in floodplains, subject to mudslides, extreme heat, and unsanitary conditions. They will be forced to work in the informal sector, earning pennies and living hand-to-mouth. Once uprooted, further disruption then can send them on to other cities or countries.

I met a neighborhood of people in Khulna, a sprawling coastal zone city that has absorbed displaced people from Bangladesh’s coastal zone. Their fields are made worthless by saltwater flooding, with their wells now often too salty to drink or use for irrigation or watering animals. Tin shacks with dirt floors were packed together in one tiny piece of land they rented, with 20 families sharing cooking facilities, a water tap, and washing place.

Bangladesh, with most of its 180 million people living on an ancient river delta, is extremely vulnerable to climate change, and has become a national laboratory for how we all are going to cope.

In this way, they had adapted to climate change, in a common way that humans have throughout history: they moved and reinvented themselves in a new place. The men learned how to pull rickshaws in the savage traffic, heat, pollution, and dust of Khulna, earning a scant living through long shifts that run from morning until late at night. Some of the women have secured low-paying jobs as domestic servants for families of more means, cleaning, cooking, and caring for children. If they can, they keep in touch with the people who stayed back home, sending money when they can to their elderly parents or spouses to survive.

Migrants also will follow networks of family or friends, to neighborhoods, cities, and across oceans to places where they hear of economic opportunities. We might feel quite distant from Bangladesh, but in today’s world, 7,000 miles and 11 times zones is not an insurmountable barrier: if inequality is high enough, people will find a way to get there. For example, the January 6 edition of the Dhaka Tribune newspaper described how 15 Bangladeshis were found wandering in Nicaragua, having been robbed and abandoned by their smugglers, on their way to the United States.

Hundreds of thousands of Bangladeshis have already made their way to the U.S. and Europe, and more will come, following friends and family and seeking economic opportunity. And of course there are the other low-lying and drought-prone countries with hundreds of millions more of the climate vulnerable. Building and fortifying walls along our borders will simply not stop them: they will take to the waters, tunnels, or the air. This is not new. What is new is the potential scale of the “push” factors, and the preventability of this slow-moving humanitarian crisis.

There are two parts to addressing this crisis-in-the-making. First, we risk sending the global climate system into uncertain levels of destabilization if we do not urgently transform our economies away from fossil fuels. The Paris climate agreement set an aspirational goal of staying near 1.5 degrees Celsius of warming, an absolutely critical focus of negotiators from the poorest and most vulnerable countries, like Bangladesh. Above that level, uncertain and very disruptive climate impacts will be set in motion. We probably need to get to zero net emissions in the wealthy nations by 2030 to stay under 1.5 degrees, with the rapidly developing nations following us by 2040, and the least developed nations by 2050. These are stunningly ambitious targets, requiring a wartime mobilization.

The other side is adaptation. I visited villages where farmers were switching from flooded field rice agriculture to prawn and fish aquaculture, raising low levees and wading into the muddy ponds every few months to collect baskets of the eight inch long crustaceans, which are sold for export and local markets. Around the ponds they grew their eggplants, tomatoes, bananas, mangos, and their goats, chickens, cows, and pigs grazed nearby. I tasted fruits I’d never heard of from trees shading their tidy villages, stepping around tarps where rice and fruits dried in the sun, as were rows of sticks covered with cow dung, for cooking fuel. They used everything, and every inch of the land was stunningly productive.

Congress needs to lead, follow, or get out of the way in scaling up adaptation finance. Otherwise, they bear their part of the responsibility for the waves of climate migrants coming to our shores and potentially destabilizing countries in Africa, the Middle East, South and East Asia.

To stay there, however, many villages need to adapt to rising waters. My trip was led by ICCCAD, the climate adaptation experts, along with their local partner organization. We saw one village where all the land had been raised to stay dry in the next flood, with special raised houses, latrines, and chicken coops. They have built a floodwall against the river’s rise, and their roads still need to be raised. The villagers felt better about their likelihood of surviving the next flood, but one old woman told us that “we raised the land, but the waters keep rising. So how do we know we’ve raised things enough?”

Stepping up U.S. engagement with Bangladesh

Obviously, we don’t know how to fully adapt to climate change, but these kinds of efforts—switching to more climate resilient livelihoods, raising houses, latrines, and roads, mobilizing new technologies to take salt out of groundwater for drinking and farm use—all need to be developed and scaled up rapidly. Bangladesh is among the cutting-edge nations working on that, but there are similar efforts around the world.

The U.S. and other developed nations need to actively support these efforts, with research and support given to efforts that work. Our funding should be both direct, through “bilateral” agencies like USAID, and through “multilateral” ones, like the Green Climate Fund, created under the United Nations. The Obama administration has quietly supported this work, but much more is needed.

Congress needs to lead, follow, or get out of the way in scaling up adaptation finance. Otherwise, they bear their part of the responsibility for the waves of climate migrants coming to our shores and potentially destabilizing countries in Africa, the Middle East, South and East Asia. (The same can be said, of course, about the need for them to support efforts to avoid the worst impacts of climate change in the only long-term way possible: by sharply reducing our emissions and being leaders in global efforts to cooperate in solving this crisis.)

One final point: USAID has plans to spend $30 million in Bangladesh for climate adaptation work here. This is crucial work, and USAID is already making a difference here. This work is hugely important diplomacy. But USAID is barely able to do its job here. In what I perceive to be an overreaction to security concerns, USAID and U.S. State Department staff are highly confined in their movements. They are essentially locked in their living quarters and offices in the sprawling red-brick and razor-wired U.S. Embassy compound, which tellingly looks like a medium-security prison. The prisoners, of course, are our representatives, unable to get out into the community to build partnerships, check on the progress of our aid projects, and keep America popular among Bangladeshis. Their families are being increasingly segregated and separated from local people. Replacing staff has grown nearly impossible in this stifling context. 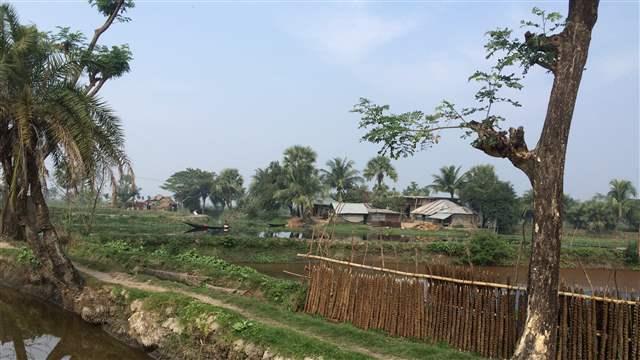 Perhaps there is a post-Benghazi reason for this fear, but it is self-defeating if our goal is to build goodwill and help this dynamic nation continue to move forward. I was quite stunned by the buzz of economic activity in Bangladesh—the wheels of production and commerce are turning on every inch of land. Poverty and sanitation and education have improved by leaps and bounds since the country’s founding just 45 years ago. With this dynamism, creativity, and resources, Bangladesh can handle a lot of climate change, and economic change. But it needs our engagement. Fear is a self-defeating response. Let our American staff be our ambassadors. Send out the Peace Corps volunteers. Fund Americans in working with local and international organizations addressing Bangaldesh’s needs. Get the student exchanges going, and the elder exchanges. Indeed, the only response to self-defeating fear is courage, engagement, and working together to address the existential problem that is climate change.

Why climate policy scenarios are important, how to use them, and what has been learned