The United States has an Aleppo dilemma. Russian forces, sensing an opportunity to rout the rebels, are bombarding Aleppo from the air and with artillery. The city is close to encirclement and a siege. Over 70,000 of its inhabitants have already left, worsening the refugee crisis that threatens stability not just in the region but also in Europe.

Washington has condemned Russia’s actions but has no idea how to stop it. Some experts have advocated a no-fly zone and action to prevent the shelling. Critics argue that this could mean shooting down Russian planes or killing Russian troops, which would increase the risk of war between two nuclear armed powers. They also say that Russia would respond to any escalation with an escalation of its own.

On the other hand, solely relying on rhetoric and calling for negotiations gives Putin and Assad a free hand to do as they wish. The administration’s prediction that Russia’s intervention would fail or be ineffective has proven to be well wide of the mark. Moscow has no incentive to change course. Aleppo could quickly become Syria’s Srebrenica.

Moscow has no incentive to change course. Aleppo could quickly become Syria’s Srebrenica.

To persuade the Russians, the United States needs to find a way of generating real leverage over Putin without killing Russian forces. There is such a way.

The United States and the EU must link financial sanctions on Russia to its actions in Syria. Until now, the U.S.-EU sanctions have only been about Russia’s actions in Ukraine and Russian compliance with the Minsk agreements. When Russia intervened in Syria, it was under the auspices of fighting ISIS. When it targeted other rebel groups instead, it was just one of several protagonists in the Syrian civil war. But, now, it has crossed a line by deliberately targeting a civilian center. The mask has dropped. 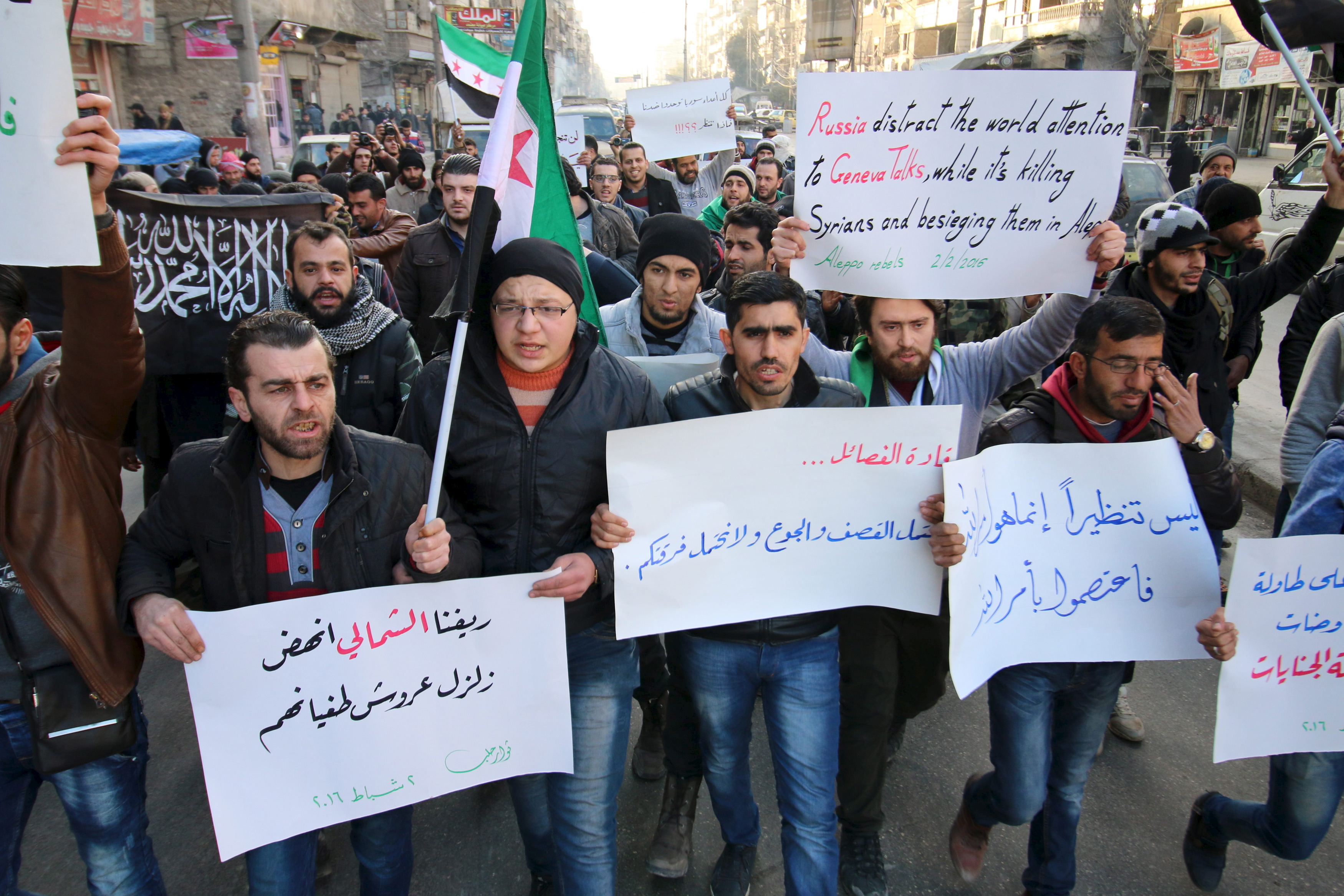 A demonstration against Russian air strikes and an offensive by government-allied forces on Aleppo. Credit: Reuters/Abdalrhman Ismail.

There is a compelling case for action. There is no moral difference between Russia’s annexation of Crimea and its assault on Aleppo. If anything, the assault on Aleppo is worse. Strategically, both are also a direct threat to the European security order—Crimea broke the norm against territorial expansion and Aleppo is worsening the refugee crisis that is testing Europe’s institutions and governments to their limit. The United States and EU member states are also bound to uphold the Responsibility to Protect, which requires the international community to protect civilians if their government is unwilling or unable to do so.

The United States and EU could give Russia and Assad an ultimatum to cease and desist by a certain date or face additional sanctions. Linking the sanctions to Russia’s actions in Syria would represent a major setback for Vladimir Putin. He has been counting on Europe lifting the Ukraine sanctions this summer. This would now not happen until Russia changes its behavior in both Ukraine and Syria.

Putin could avoid linkage and new sanctions by allowing aid into Aleppo and by ceasing the assault. This leverage could also provide some much-needed political space for negotiations and may also encourage Russia to look again at proposals involving power sharing or confederations in Syria.

If he does not comply, the United States and the EU could consider increasing the sanctions that are currently in place. They could put Russian participation in the SWIFT payment system, on which its banking system relies, on the table. SWIFT sanctions were correctly deemed too escalatory in Ukraine but it would be a justifiable last resort to prevent mass killing and ethnic cleansing in Aleppo.

EU members have mixed feelings about the sanctions on Russia but the refugee crisis poses a more immediate existential threat to the EU than Russia’s invasion of Ukraine. European governments are desperate to stem the flow of refugees and any such initiative must start with curbing Assad’s offensive, which is the main driver of the crisis. To do that, Europe needs leverage on Russia.

Sanctions also have the crucial advantage of being politically acceptable to President Obama. He has repeatedly signaled that he will not authorize any military action that directly involves the United States in a war with Assad or his allies. But he has already backed sanctions on Russia, Iran, and other states. And leverage is a necessary component of an effective diplomatic strategy. Financial power is Obama’s tool of choice. It is time to use it again.