U.S. chairmanship in the Arctic Council will receive a needed boost from the upcoming conference in Anchorage, which President Barack Obama is due to address on August 31. His message is predictable: He’ll talk about climate change. Russia has received an invitation to the conference, but decided to send a fairly low-level delegation. Russia certainly has important interests in the Arctic region and even higher ambitions, but its Arctic agenda has little to do with climate change. Instead, it can be best described in the old-fashioned and often quite unhelpful terms of geopolitics.

By just about any measure, Russia is an Arctic superpower. It has an enormous coastline, a significant number of people living above the Arctic Circle, six nuclear-powered icebreakers in the region, and industrial centers in Nikel and Norilsk (which produce a high volume of industrial pollution).

Russia used to play up this status, staging large-scale annual conferences, graced by President Vladimir Putin’s presence. Not anymore, and it is not just the fallout from the Ukraine crisis that has poisoned that climate of cooperation. Russia has experienced two major setbacks in its vision for “conquering” the High North.

The first setback came from the seriously reduced value of the natural resources that are presumed to be hidden in the depths of the Arctic shelf. Putin’s lieutenants—including Nikolai Patrushev, the secretary of the Security Council of Russia—loved to engage in speculations about the fierce competition for access to the rich oil and gas fields that were certain to be discovered there. The problem is not only that the U.S. and EU sanctions have made it impossible for the state-owned oil giant Rosneft to continue the exploration of Arctic seas. (Sanctions prevent the import of technology and know-how, and U.S. companies—such as Exxon Mobil—who had worked in partnership with Rosneft have left.) The real problem is that estimated production costs and low oil prices add huge liabilities to any off-shore project.

The second disappointment has to do with international maritime transit along the Northern Sea Route (called Sevmorput in Russian). Many politicians in Moscow expected that climate change would shrink the Arctic ice, increase the commercial viability of a shorter connection between China and Europe, and provide useful employment for Russian icebreakers. The problem is that the old Soviet infrastructure along the Sevmorput is so rotten that navigation in the difficult northern waters remains too risky. Egypt, in the meantime, has swiftly constructed the New Suez Canal, which offers a far more reliable route for tanker and container traffic. 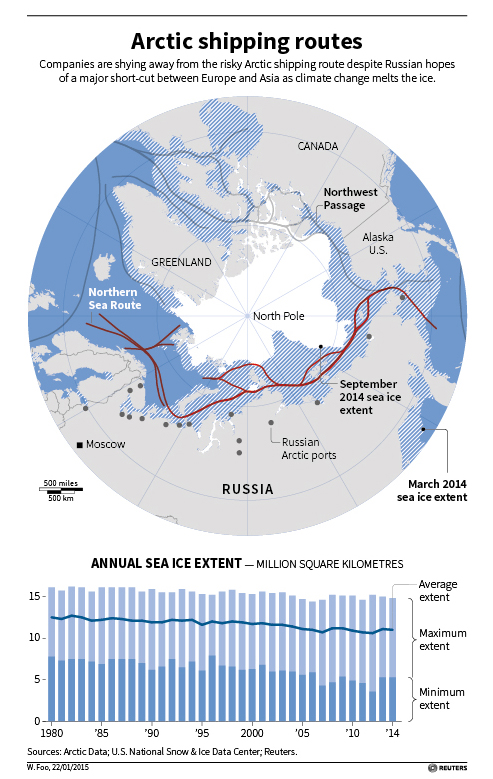 As the economic rationale for high political attention to the Arctic disappears, Moscow focuses on the game it knows best: military power plays. As the crowd of environmentalists and climate-concerned politicians prepare to gather in Anchorage, a Russian navy squadron executed a large series of exercises along the Sevmorput. Although the ships are 30-plus years old and their hulls have no ice protection, Russia is determined to show readiness to deploy the newly-created Arctic brigade to any desolate shore in the northern seas. This follows the revised Maritime Doctrine that Putin approved a month ago, which places a heavy emphasis on protecting Russia’s interests in the Arctic.

It takes a lot of strategic imagination to construct threats to these interests. Aleksandr Bortnikov, the director of the Federal Security Service (FSB), has argued that there is an urgent need to upgrade defenses against terrorist attacks. In fact, the only challenge Russia has encountered in the area was the Greenpeace protest against Gazprom’s drilling platform in the Pechora Sea in September 2013. The FSB launched a swift operation to arrest the eco-activists and their ship Arctic Sunrise on the charge of piracy. The permanent court of arbitration in The Hague then ordered Russia to pay damages for that harsh arrest, much to the consternation of Russian authorities.

What Moscow really worries about is the examination of its claim for expanding the continental shelf under its control all the way to the North Pole (a claim currently sitting with the U.N. Commission on the Limits of the Continental Shelf, or CLCS). After many years of preparation, this revised claim was finally submitted on August 3, and the success is a matter of high political prestige. But it is very doubtful that demonstrations of military might would help that process. Further complicating matters is that Denmark has submitted an overlapping claim and Canada is finalizing its own—and the CLCS cannot make a recommendation on competing claims unless parties agree on a compromise.

Russia appears firmly set on its course of militarization of the Arctic. In a region where economic activities are mostly declining and where environmental challenges are on the rise, Russia appears to be engaged in a one-sided arms race. It is glaringly obvious to observers outside the Kremlin that Russia’s severe economic recession makes this course unsustainable. Russia may aspire to Arctic greatness, but there is little there to achieve and Russia is unlikely to be able to achieve it.

[To speak out against environmental wrongs] is seen as legitimate, [even in a Russia where Putin has clamped down on dissent]. People are talking about their personal well-being and their local well-being, but also the well-being of Mother Russia. Putin himself has made such overtures, touting the amazing range and richness of Russia's natural wealth and the environment. [And the Far North is integral to Russia's identity and Putin's ambition] to be an Arctic power par excellence.