President Obama arrived in Panama for the seventh Summit of the Americas with a clear mission: restore the feel-good atmosphere of his first regional summit in Trinidad. There he received plaudits as the first African-American president, a post-unilateralist leader for a more multipolar world. Six years later, and with a complicated record to defend, he had to work harder for the ovations. But his administration’s efforts paid off, and he left Panama a winner. The President’s decision to remove Cuba from the dreaded U.S. list of state sponsors of terrorism is further demonstration that Obama is convinced that U.S. interests in Cuba are best served through constructive engagement and not onerous sanctions. Now he must persuade Congress.

First and foremost, the Panama Summit will be remembered for cementing the historic process of normalization of ties between the United States and Cuba launched by Presidents Obama and Raúl Castro on December 17. The Panama meeting offered a chance not only for the rest of the region to ratify Obama’s overture to Castro, but to close the books on the Cold War and open a new chapter in inter-American relations. Bill Clinton led the way on this track in the 1990s, but the train got derailed in the 2000s under George W. Bush. The ghosts of Washington’s heavy-handed past, on matters such as the war on drugs, immigration, counter-terrorism, and the hangover of the “Washington consensus,” returned to haunt Obama’s second summit in Cartagena in 2012. The White House was determined to re-set course before sitting through another series of harangues against the sins of the past by delivering important progress on several policy fronts in the months leading up to Panama.

No issue was more representative of U.S. bullying in the region than the decades-old embargo against Cuba. When the region’s presidents said they would not come to Panama unless Cuba was invited as a full participant, the White House was forced to fish or cut bait. Correctly, President Obama chose to fish. The breakthrough of December 17 was rewarded with widespread praise by his counterparts and by publics in both the United States and Cuba. The president’s main task for Panama, then, was to deliver a winning message for the first face-to-face meeting in over five decades of hostilities. 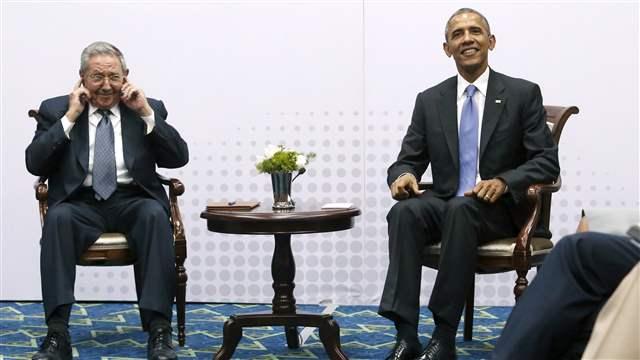 No image better captures the competing narratives of the deep historical differences between the United States and Cuba than the one above. The elder Raúl Castro, who does not have to worry about his state-controlled media, plugs his ears to drown out the clamor of journalists asking questions after the two leaders’ first meeting, while the younger Obama is ready to engage the press, a customary stance for leaders in a democracy.

The contrast between old and new continued in the plenary where Obama gave a focused presentation  about moving beyond “the old grievances that had too often trapped us in the past” to a future based on shared responsibility and mutual respect. “We’re looking to the future and to policies that improve the lives of the Cuban people.”

Castro, on the other hand, multiplied his allotted eight minutes of remarks to 48 (to make up for the six summits Cuba was not invited to, he joked) to recount a long litany of transgressions by previous U.S. governments dating back to 1800. He reminded the audience of Washington’s overthrow of the democratically-elected government of Guatemala in 1954 as the precursor to Cuba’s own popular revolution and invoked his brother Fidel in blaming global poverty on the aggressions of colonial and imperialist powers. Remarkably, however, Castro specifically absolved President Obama from any responsibility for such actions, an important gesture that opens the door for more progress. “President Obama is an honest man…I admire his humble origins,” Castro said, and urged others to support his efforts to eliminate the embargo. Castro also said Cuba was prepared to work with the United States on such issues as climate change, terrorism, drug trafficking, organized crime, and poverty eradication.

With the removal of Cuba from the U.S. list of state sponsors of terrorism, and the last-minute softening of U.S. rhetoric toward Cuba’s chief ally, Venezuela, the Americas may be entering an unprecedented era of peace and cooperation. That leaves respect for democracy and human rights as the chief area of conflict between the United States and Cuba (and a few other countries).

Here again, the contrast between the behavior of pro- and anti-government Cuban activists emerged in sharp relief in Panama. Highly aggressive actions by “official” Cuban nongovernmental organizationss against dissidents from Cuba and Miami, including physical and verbal insults and attacks, were completely out of tune with the modern era of inclusion and respect of independent civil society voices at such meetings. Their orchestrated disruptions of what should have been a robust but civil debate laid bare the real threat Cuba’s rulers face—from its own public tired of the regime’s broken economic system and closed politics—and the heavy challenge they face in opening economically while maintaining political control. President Obama spoke to this issue when he told the press: “On Cuba, we are not in the business of regime change. We are in the business of making sure the Cuban people have freedom and the ability to…shape their own destiny.” The primary way to do this, Obama added, is through “persuasion” and not sanctions. Cuba’s behavior “does not implicate our national security in a direct way,” foreshadowing this week’s decision to de-list Cuba from the terrorism sponsor category.

Cuban officials claim they are practicing a form of popular democracy that is just as legitimate as representative democracy. But few honestly believe this can be squared with core universal norms like free speech and association. For his part, Castro acknowledged that “[w]e could be persuaded of some things; of others we might not be persuaded.” Patience, he added, is needed, signaling yet again that progress toward normalizing relations will be slow. He then proceeded to instruct his closest assistants to “follow the instructions of both Presidents,” a telling reminder of the continued resistance to change from his own bureaucracy. Obama will now have to persuade his colleagues in Congress that Cuba is no longer the threat it was in the past.