The international community is watching closely as Iranians wrap up two elections today, one for the parliament, or Majlis, and the other for the Assembly of Experts. Here are brief profiles of the central actors in current Iranian politics.

Since the Islamic Republic’s establishment in 1979, only two men have held the most powerful office in the country. In 1989, the Republic’s founder and first supreme leader, Ayatollah Ruhollah Khomeini, died. He was succeeded by Ayatollah Ali Khamenei (1939 -), a student of Khomeini’s who was active in the anti-Shah opposition. Khamenei briefly served as minister of defense and supervisor of the Iranian Revolutionary Guard Corps (IRGC) before becoming president in 1981. He was the third man to hold that office during the revolution’s tumultuous beginnings; the Islamic Republic’s first president, Abolhassan Banisadr, was impeached by parliament in 1981 and fled Iran as part of the regime’s opposition. Banisadr’s successor, Mohammad Ali Rajai, held the office for only a month before he was assassinated in one of a series of terrorist attacks that also killed more than 80 members of the parliament.

During Khamenei’s presidency, the Islamic Republic operated on a parliamentary system, and the office was largely a ceremonial role. In March 1989, just months before Khomeini’s death, the supreme leader’s designated successor resigned under pressure from Khomeini and his senior aides. With the help of then-speaker of the Majlis Akbar Hashemi Rafsanjani, who claimed that Khomeini had hinted of Khamenei’s qualifications for supreme leader, and with two presidential terms under his belt, Khamenei assumed the office of supreme leader in June 1989. 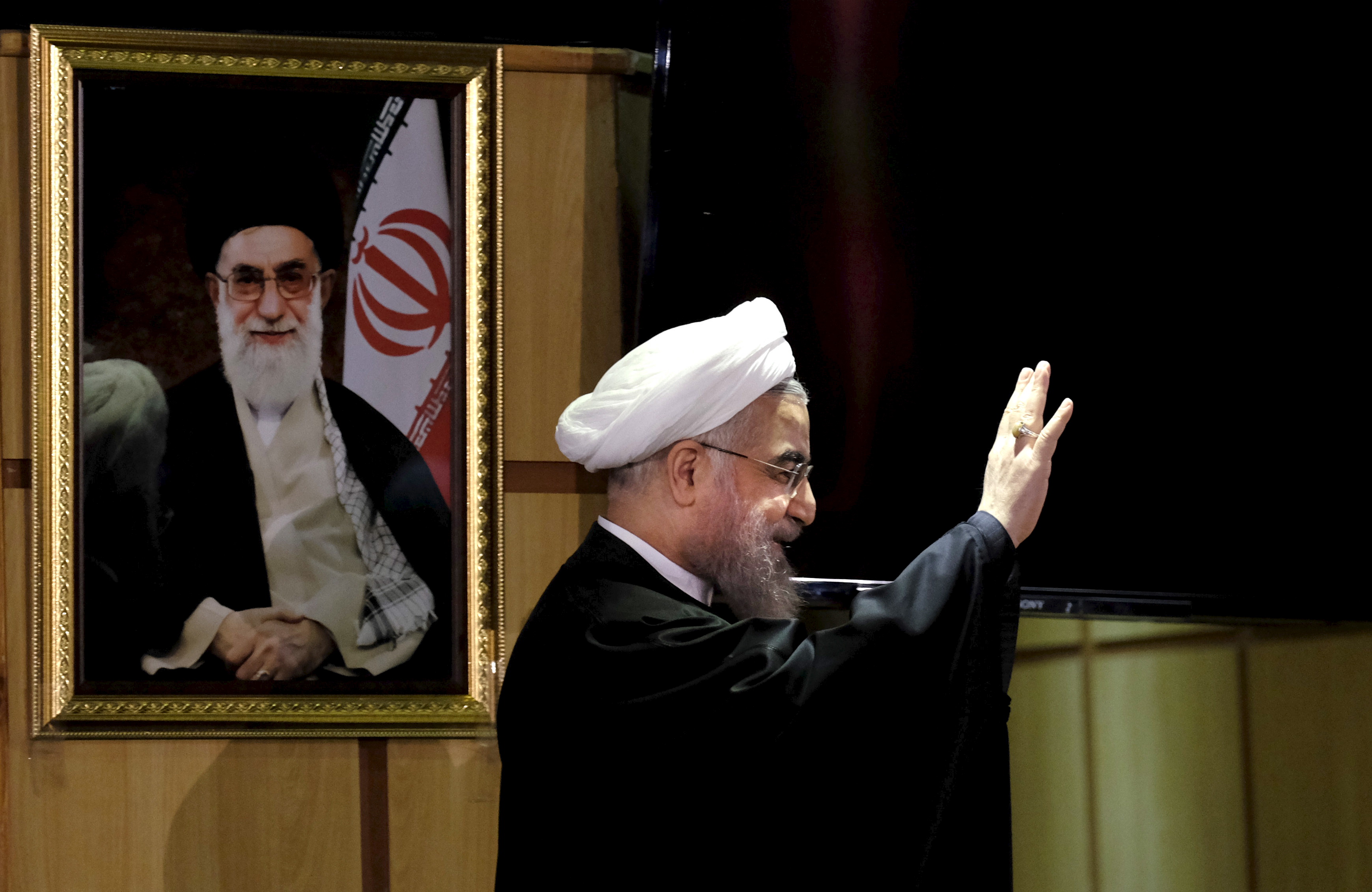 Hassan Rouhani (1948 -), the current president, was also actively opposed to the shah in the 1960s and 1970s. After the revolution, he spent two decades in parliament and was the secretary of the Supreme National Security Council under former presidents Akbar Hashemi Rafsanjani and Mohammad Khatami. In this role, Rouhani served as lead negotiator on the nuclear issue from 2003 to 2005 (he resigned after former president Mahmoud Ahmadinejad took office); and he’s been a member of the Expediency Council since 1991. In his 2013 campaign for presidency, Rouhani campaigned on a slogan of “prudence and hope:” he promised to usher in economic growth, improve Iran’s regional relations, and reduce tensions with the West.

The crown jewel of Rouhani’s presidency, the nuclear deal, was negotiated by his foreign minister, Mohammad Javad Zarif (1960 -). Zarif speaks English with an American accent, has three degrees from American universities, and served as Iran’s UN ambassador under president Khatami. Zarif is not running for office in today’s elections, but he will remain central to how international observers view Iran.

The current speaker of the parliament is Ali Larijani (1957 -), former chief nuclear negotiator. Larijani’s experience runs the gamut: from the IRGC to the ministry of culture, the Expediency Council, the state broadcasting authority, and the Supreme National Security Council. Larijani, like many others in Iranian politics, comes from a very prominent clerical family, and Khamenei personally selected him to head state television. Although he is known to be a conservative, his pragmatism led him to ally with the Rouhani presidency on several issues, most importantly the July 2015 nuclear deal.

Akbar Hashemi Rafsanjani (1934 -) also studied under Khomeini and was an active opponent of the shah. Following the 1979 revolution, he became the first speaker of parliament. He was also Khomeini’s representative to the Supreme Defense Council, and was made commander-in-chief during the final months of the Iran-Iraq war. After Khomeini’s death, he played a significant role in orchestrating Khamenei’s appointment as supreme leader. Khamenei supported Rafsanjani’s bid for the presidency: he was elected in 1989 on a platform of post-war reconstruction and economic reform. Although he publicly dangled the prospect of running for a third consecutive term, he left office per constitutional requirements in 1997.

Rafsanjani has also served as chairman of the Expediency Council, an innovation that was intended to overcome the deadlock on legislation between the parliament and the Guardians’ Council since its 1988 inception, and has been a longstanding member of the Assembly of Experts, including holding the chairmanship from 2007 to 2011.

Rafsanjani’s political stature has waxed and waned over his long career. He was the bete noire of the reformists during the early phase of that movement’s development. In 2005, when Rafsanjani ran against Mahmoud Ahmadinejad in the presidential elections, the supreme leader sided with the latter. Although Khamenei encouraged Rafsanjani’s candidacy for the Assembly of Experts in 2006, Rafsanjani’s support for the opposition Green Movement in 2009 increased tensions. Today, Rafsanjani still heads the Expediency Council; and he is the favored reformist candidate for the Assembly of Experts, followed by Rouhani.

The reformists’ history and a possible comeback

Many observers contend that Rouhani’s electoral victory in 2013 was made possible by Mohammad Reza Aref (1951 -). From 2001 to 2005, Aref served as vice president to former president Khatami. In 2013, he was the only reformist candidate approved to run, but he withdrew his candidacy at Khatami’s request only days before the vote. He did not endorse Rouhani’s campaign, and many were surprised that he was not absorbed into the Rouhani cabinet after the election.

Now, Aref is running as the lead reformist competing in the Majlis elections. Earlier this month, Aref announced a joint reformist-moderate candidate list, the “Coalition of Reformists and Government Supporters.” The inclusion of a number of principalists—Iran’s conservatives who stress the importance of principles such as loyalty to Islam, to the revolution, and to the supreme leader—in this list has been criticized by some reformists, but Aref argues that these individuals are considered government supporters, not principalists, in the context of the list. This is in line with Aref’s measured stance—he has never espoused the most radical reformist positions. 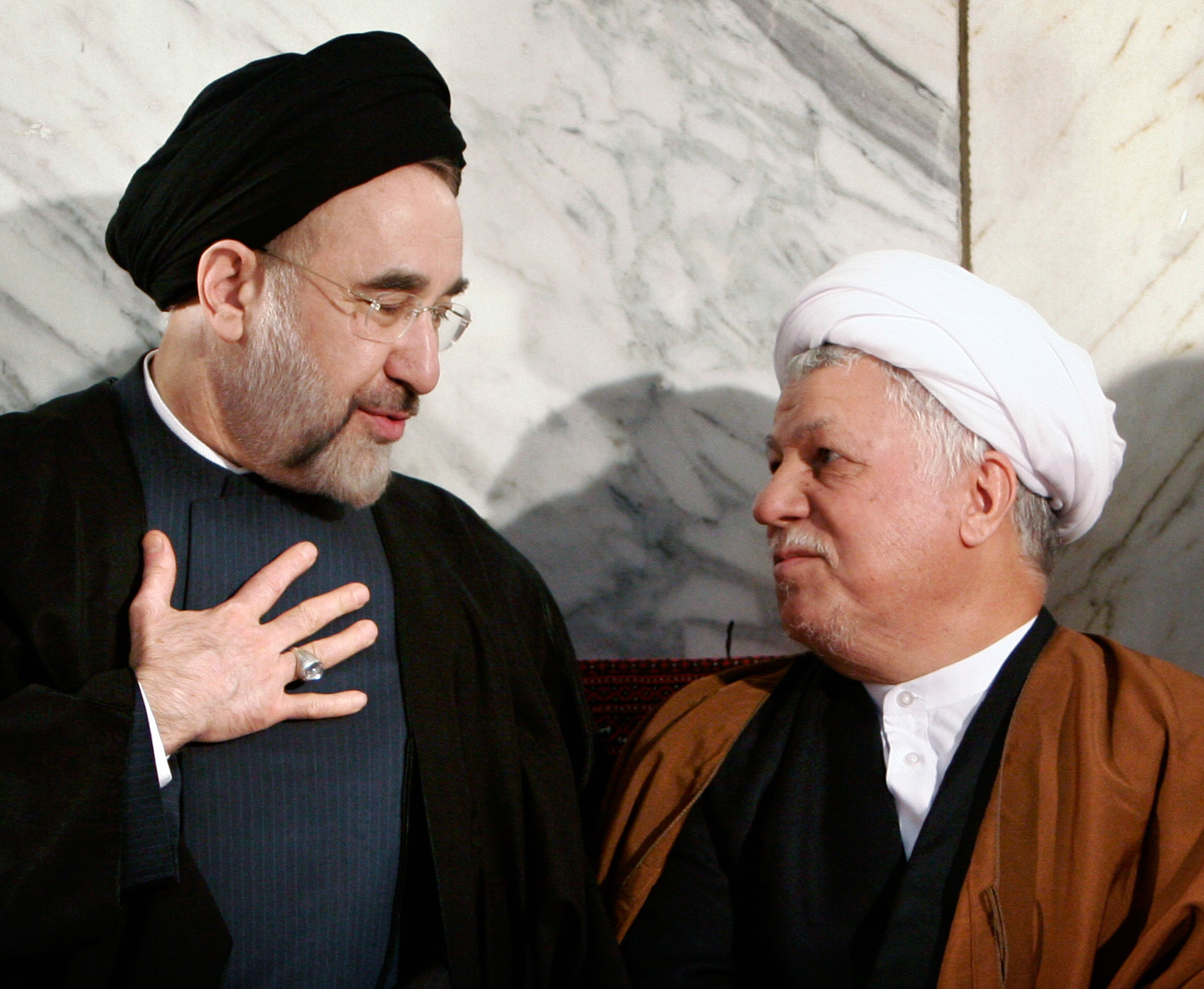 The standard-bearer of the reform movement is former president Mohammad Khatami (1943 -). In 1997, Khatami won the presidency with 70 percent of the vote in an election with 80 percent turnout. A former member of parliament and culture minister, he promised to strengthen the rule of law, rights, and the position of women and youth in society. Under Khatami, more political and civic associations were granted licenses; two intelligence ministers were forced out of office; constitutionally-mandated elections for local councils were held for the first time; economic liberalization was pursued; and Tehran’s relationship with its neighbors and Europe improved significantly. The security services, the supreme leader, and many hardliners opposed these reforms; and particularly in the wake of a reformist victory in the 2000 parliamentary elections, the backlash against reformist politicians, dissidents, and intellectuals associated with the movement was severe and violent.

During his second term, and frustrated by obstacles posed by conservative forces, Khatami attempted to boost the power of the president and curb that of the Guardians’ Council. The Majlis approved the bills but, unsurprisingly, the Guardians’ Council rejected them. By the end of his second term, disappointed students—his former supporters—were openly expressing disillusionment with his tenure and with the movement as a whole.

However, since leaving the presidency, Khatami’s popular reputation has rebounded, and he is often described as the most widely admired political figure in the Islamic Republic, even if he is relegated to the political margins by the state. Khatami’s support for Rouhani’s 2013 presidential bid was crucial to the latter’s victory. Following the election, Khatami observed that “[r]eal reformism is compatible with rational moderation,” and Rouhani’s “slogan of moderation…is not outside the sphere of reformism.”

However, Khatami’s position within the system is precarious as a result of quiet support for former presidential candidates Mir Hossein Mousavi and Mehdi Karroubi, leaders of the 2009 Green Movement who have been under house arrest since 2011. Alone among Rouhani’s predecessors, he was not included in the president’s August 2013 inaugural ceremonies. And in February 2015 Tehran’s justice department announced that the media was prohibited from publishing Khatami’s name or image. Although Khatami has avoided house arrest, he is hardly free and cannot leave the country. He has encouraged voter participation in today’s elections via a video circulated via the social media app, Telegram.

Ahmad Jannati (1926 -) has served 25 years on the Guardians’ Council (which he has chaired since 1992), 30 years on the Assembly of Experts, and 27 years on the Expediency Council. In the upcoming Assembly of Experts election, Jannati’s ultra-conservative camp is facing off against Rafsanjani’s moderate one. In a common twist of Iranian politics, Jannati’s son Ali serves as Rouhani’s minister of culture, and has been criticized for failing to enforce sufficient orthodoxy in his oversight of cultural issues. 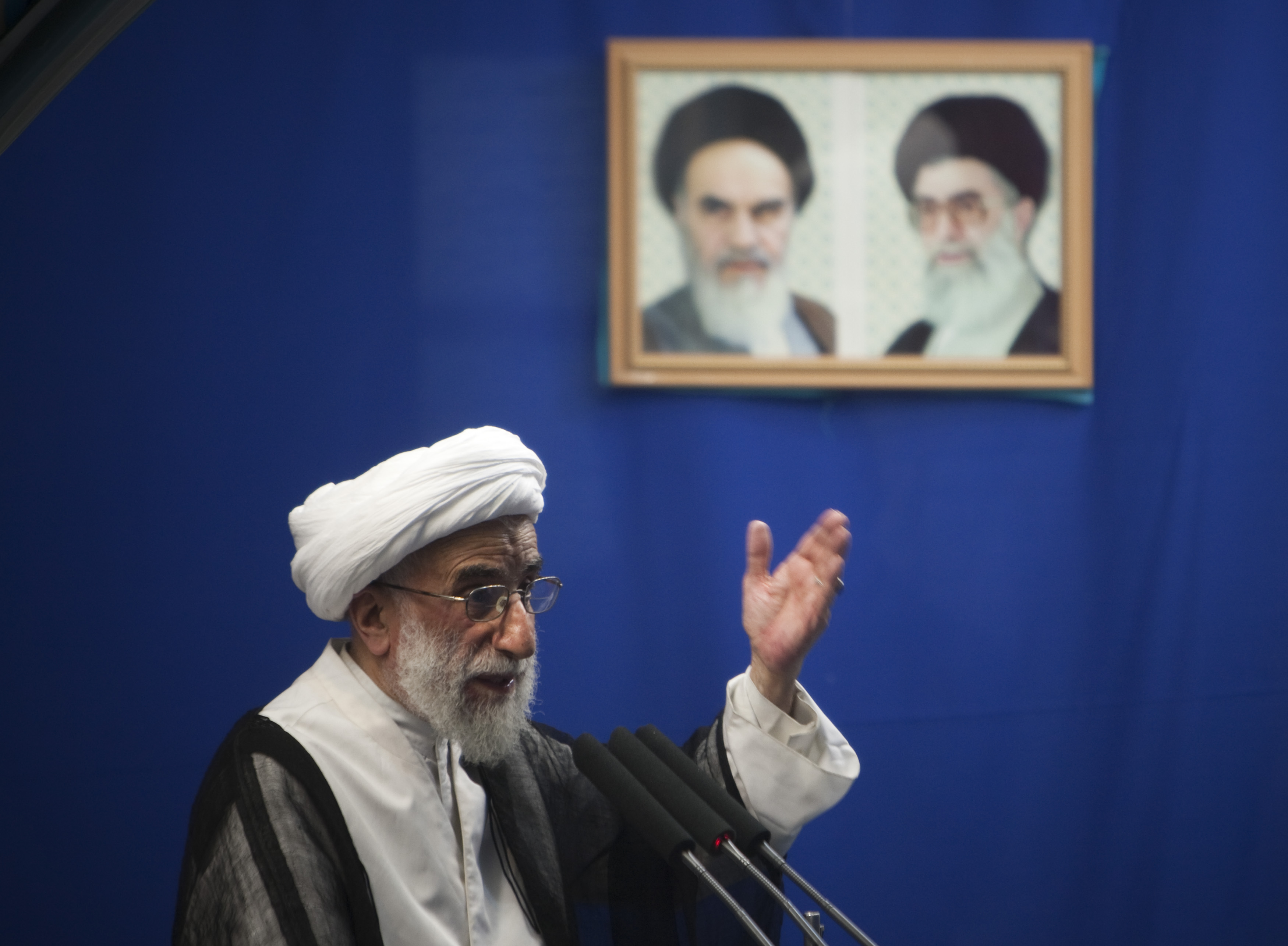 Mohammad-Taqi Mesbah-Yazdi (1934 -) is a central figure in the Jannati camp, and some suggest he could be the next supreme leader. In the Assembly of Experts, he leads the opposition to Rafsanjani, and he is known to criticize former president Khatami. Many conservative clerics and politicians, most notably former president Mahmoud Ahmadinejad, look to Mesbah-Yazdi as their spiritual guide. Mohammad Yazdi (1921 -) is also running in Jannati’s camp. He has experience in nearly all the most important offices in Iran’s political system: the office of Supreme Leader Khomeini, the Revolutionary Court in Qom, the Majlis, the judiciary, the Guardians’ Council, the Assembly of Experts, and the Expediency Council. In March 2015, the Assembly of Experts voted to make Yazdi the body’s chairman, defeating Rafsanjani and signaling that the conservative forces are looking to position themselves to choose the next supreme leader.