Editor’s Note: Elizabeth Arsenault and Tricia Bacon, professors at Georgetown University and American University respectively, examine the phenomenon of terrorist safe havens, assessing the many variants and their policy implications. This article originally appeared on
Lawfare
.

Eliminating terrorist safe havens has been a central component of U.S. counterterrorism policy since 2001. The issue has recently received renewed attention as the so-called Islamic State acquired significant swaths of territory in Syria and Iraq. However, despite this focus, scholarship and government policy on the issue remain compromised by significant misconceptions. Correcting these weaknesses requires a new framework for understanding safe havens. Specifically, recognizing safe havens as diverse entities that are created, perpetuated, and eradicated by people rather than as uniform and naturally occurring areas, is vital.

To this end, we suggest a typology based on the interaction between government will and capability to demonstrate that there are actually three types of safe havens, each existing along the intersection of these two functions. In addition to providing a better understanding of the life cycle of terrorist sanctuaries, this typology helps protect the United States and its allies from devastating terrorist attacks by recognizing the true nature of safe havens and the threats they pose.

It is important to understand the definition and purpose of a safe haven. A safe haven is a location where terrorist groups engage in support activities—such as training, recruiting, fundraising, and communications—with limited fear of sustained counterterror retaliation or pressure. As such, this typically means abstaining from conducting terrorist attacks within the haven; such attacks could trigger retaliation, and once consistent retaliation and pressure are a possibility, the location, by definition cannot be considered safe.

Since 9/11, conventional wisdom has held that the ideal locations for terrorist safe havens are in “ungoverned or poorly governed territories, where the absence of state control permits terrorists to travel, train, and engage in plotting.” This explanation has been challenged by scholarship and does not accurately capture reality. Many weak states make less than ideal havens for terrorism. The presence of heavily armed warring factions in many weak states, such as those in the Democratic Republic of the Congo and Ivory Coast, rather than attracting terrorists, pose risks to groups seeking sanctuary.

For example, Al Qaeda’s attempts to establish a safe haven in Somalia starting in the early 1990s were routinely thwarted by disagreements with more powerful militant groups such as al-Ittihad al-Islami as well as by Ethiopian interventions that were prompted by the presence of large and hostile groups on its border. Likewise, the lack of international presence in many of the weakest states can complicate foreign terrorists’ ability to blend in with the population. Finally, weak states tend to lack the basic functioning foundations, particularly ready access to financial and logistical infrastructure, for terrorist groups to engage in support activities. Conventional wisdom also obscures the fact that groups can—and have—found sanctuary in strong, liberal states. For example, Basque ethnonationalist separatists found haven in neighboring France until relatively recently. 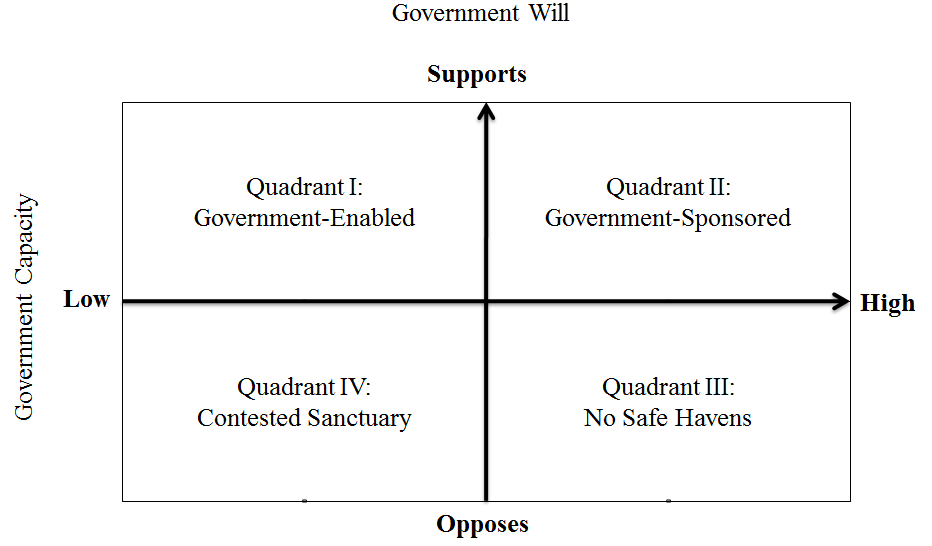 Safe havens do not automatically emerge in certain environments; they emerge based on the interaction between host government political will and capability. Our typology (Figure 1) highlights the conditions that allow safe havens to form and operate, and equally important, the changes required to eradicate them. Combinations of capacity and willingness intersect to produce three types of safe havens: government-enabled sanctuary, government-sponsored sanctuary, and contested sanctuary.

Rather than the current practice of identifying whole geographic areas as safe havens and focusing on building overall state capacity to confront them, the typology calculates government ability and will vis-á-vis each individual terrorist group. In other words, the focus is on the government’s position toward the terrorist organizations harbored in its territory rather than on its status in a given geographic zone. It’s about the Pakistani government’s ability and will to deny haven to the Haqqani Network rather than its ability to govern North Waziristan.

Government ability to deny safe haven should be gauged relative to the terrorist organization(s) that it faces and the government’s capability in the specific location(s) of the group’s haven for two main reasons. First, while certain capabilities are always useful to have, such as effective special forces and human intelligence assets, their utility will vary based on location and the group being targeted. That’s to say, what works against one terrorist group may not work against another. Some terrorist groups will possess capabilities that make them more adept at exploiting certain state weaknesses than other organizations. As such, macro-level state capacity indicators do not provide the nuanced picture necessary for analyzing the host government’s ability to resist.

Second, the government may be capable of denying haven in some parts of its territory, such as near the capital or in areas where public support for the government exists, but be less capable in areas farther afield or among disaffected subsets of the population. The type of capabilities required to oust a foreign organization in the border hinterlands will differ from those needed to confront a predominantly domestic group located in major urban centers.

A government’s intent toward resident terrorist groups is also a complex variable, simplified by the typology as a spectrum ranging from support to opposition. Assessing intent requires an in-depth understanding of the state’s history, culture, adversaries, conflicts, and view of its national security. The government’s intent toward the haven(s) in its territory will also depend on whether the organization is directly challenging the host government or whether it is externally focused and thus poses little threat to the host government. Governments can have a permissive policy towards one resident organization while opposing another; therefore, intent must be calibrated for each group in each haven. For instance, the Pakistani military has used military operations to deny the Pakistani Taliban haven in the Federally Administered Tribal Areas (FATA), but its willingness to allow the Haqqani Network sanctuary there has not changed.

In assessing whether a government is willing and able to eliminate the havens in its borders, it is critical to recognize that states—especially weak ones—are not monolithic actors. Rather, they harbor deep divisions that can foster multiple and even contradictory policies that affect the governments’ capacity and intent. Thus, anti-sanctuary assessments must focus on the actors that exert the most influence over safe haven policies. For example, in Pakistan, havens should be assessed based on the Pakistani Army’s intent and capability—the primary deciding factors of Pakistan’s sanctuary policies—toward Lashkar-e-Tayyiba, the Haqqani Network, the Afghan Taliban, the Pakistani Taliban, and Al Qaeda (among others) even though their havens sometimes overlap, rather than identifying Western Pakistan, the FATA, or just Pakistan writ large as a haven.

A proper understanding of safe havens is necessary because the deadliest terrorist groups are the ones with physical sanctuaries. Arguments that online coordination is equally important compared to physical sanctuary are incorrect. It is true that the Internet can be extremely useful for recruitment and propaganda efforts, as the Islamic State’s flashy videos show. However, the Internet is no replacement for a physical haven, as the Islamic State has also shown. Terrorist groups, like any network organization, require high levels of personal trust and coordination to successfully function. The Internet, with its emphasis on anonymity, is not particularly good at developing these attributes. Moreover, no video or digital document can truly replace in-person training and instruction. And of course, rather than being an asset, one could equally say that online communications make terrorist groups more vulnerable to government detection and infiltration.

Direct, face-to-face interactions in a haven avoid these complications. Furthermore, physical havens allow terrorist groups to more efficiently manage resources and execute command and control over members. Last, research shows that groups with physical sanctuaries are more effective at forging alliances with other terrorist organizations, which can severely augment the terrorist threat.

Given the continued relevance of physical safe havens, it is important the government properly understands them and crafts its counterterror policies accordingly. The will and capability typology is a useful tool in this effort. It shows how sanctuaries are diverse rather than uniform entities that require specifically tailored strategies to account for where each one falls along the willingness and capability axes. As such, policies that may be suitable for combating one haven, such as sanctions or targeted strikes, may not be appropriate for another.

Additionally, it is important to recognize that the will and capability to allow a safe haven to form, and the will and capability to eradicate that sanctuary, are two different things. It takes very little effort to allow a sanctuary; a government need only turn a blind eye and not interfere. Eliminating a safe haven, on the other hand, usually requires considerable commitments of political capital, financial resources, and military assets. Therefore, as with many other issues, it is less costly to prevent a safe haven from forming in the first place than to try and eradicate it once it has already been established.

A need exists to disaggregate and identify how the United States can approach haven elimination. Existing policies, which treat entire geographic areas as uniform sanctuaries, lack the nuance needed to develop effective strategies. A more sophisticated approach to safe havens premised on the relationship between host government will and capability offers a starting point for devising such strategies and could thereby better protect the United States and its allies from devastating terrorist attacks.

Assessing UN state-building in South Sudan, the Democratic Republic of Congo, and beyond