The meadow outside the small village of Dabiq, Syria is a strange setting for one of the final battles of the Islamic apocalypse. Although close to the Turkish border, “Dabiq is not important militarily” observed a leader in the Syria opposition. And yet the Islamic State fought ferociously to capture the village this summer because its members believe the great battle between infidels and Muslims will take place there as part of the final drama preceding the Day of Judgment.

In a prophecy attributed to Muhammad, the Prophet predicts the Day of Judgment will come after the Muslims defeat Rome at al-`Amaq or Dabiq, two places close to the Syrian border with Turkey. Another prophecy holds that Rome’s allies will number 80. The Muslims will then proceed to conquer Constantinople (Istanbul).

The Dabiq prophecy has not figured prominently in the Islamic State’s propaganda until recently. Abu Mus`ab al-Zarqawi mentioned it as the ultimate destination of the spark that had “been lit here in Iraq.” The first head of the Islamic State, Abu Umar al-Baghdadi, quoted the prophecy in one of his statements. But it was not until this year that the Islamic State really began to focus on the Dabiq in its propaganda. An Islamic State spokesman mentioned the ill-fated village in a statement in April, and in July the Islamic State released an English-language magazine named “Dabiq.” The editors, calling themselves the “Dabiq team,” explain why they adopted the name for their magazine: “The area will play a historical role in the battles leading up to the conquests of Constantinople, then Rome.” But first the Islamic State had to “purify Dabiq” from the “treachery” of the other Sunni rebels who held it and “raise the flag” of the Caliphate over its land.

A few weeks later, Islamic State fighters took the village from Sunni rebels, killing forty and capturing dozens. Setting up snipers and heavy machine guns on the hill overlooking Dabiq, they repelled an attempt by the Free Syrian Army to retake the area. Islamic State supporters were jubilant, tweeting pictures of the Islamic State’s flag from the hilltop together with quotes from the prophecy. 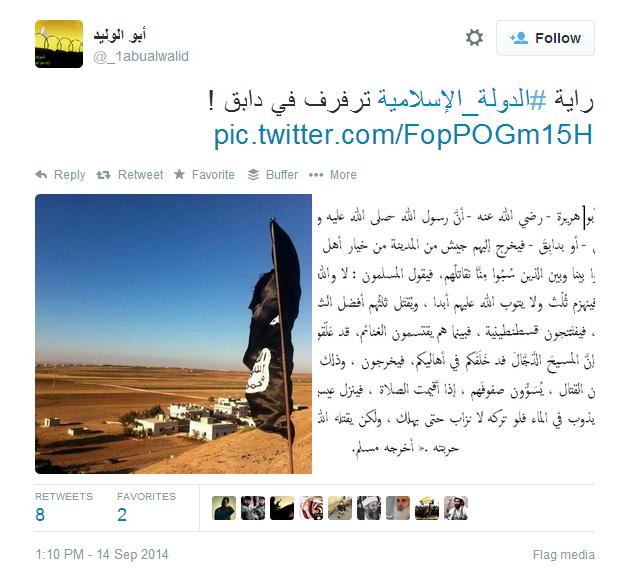 Jihadi tweets about Dabiq spiked again last month when the United States began to consider military action against the Islamic State in Syria. Islamic State supporters counted the number of nations who had signed up for the “Rome’s” coalition against the Islamic State. “Thirty states remain to complete the number of eighty flags that will gather in Dabiq and begin the battle.” Yesterday, after Turkey’s parliament approved military operations against the Islamic State in Syria and Iraq, the jihadi twittersphere applauded “Turkey’s entry into the war will permit the foreign invasion of northern Syria, meaning from the plain of Dabiq. The battles (of the End Times) have grown near.” “#Turkey_commitedsuicide,” tweeted another. “In Dabiq the crusade will end.”

The last time the Turks invaded Dabiq, things did not go well for the Arabs. The Turkish Ottoman sultan, Selim I, defeated the slave armies of the Mamluk Sultanate in the meadow of Dabiq in 1516, which gave them the eastern Mediterranean and eventually Egypt and the Hijaz, inaugurating 500 years of Ottoman rule over the Arabs. His grandfather Mehmed II conquered Constantinople from “Rome,” the Byzantine Empire and his son Suleiman the Magnificent would go on to conquer large swathes of eastern Europe.

The fact that Turkish Muslims, not infidel Romans, control Constantinople today and are working with the infidel Romans against the Islamic State makes the Dabiq prophecy a poor fit for contemporary events. The inevitable defeat of the Islamic State at Dabiq, should it ever confront “Rome,” would also argue against the prophecy’s applicability. But in the apocalyptic imagination, inconvenient facts rarely impede the glorious march to the end of the world.