Editor’s Note: In this month’s employment analysis, The Hamilton Project‘s Michael Greenstone and Adam Looney examine whether starting college is still worth the investment for students who fail to complete a degree. The findings suggest even completing “some college” has a higher rate of return than many conventional investments including stocks, bonds, and real estate.

Employers added 175,000 jobs in May, according to today’s employment report from the Bureau of Labor Statistics, about the same average pace of job creation over the prior year. All of the job increases were in the private service-providing sector; employment edged down in both the goods-production sector, which includes construction and manufacturing, and in government. This reflects a longer-term pattern: over the prior year, employment in the service sector has increased by almost 2 million jobs, while employment in the goods-producing sector has been essentially flat, and public employment has declined.  Also in May, the unemployment rate edged up to 7.6 percent. The broadest measure of employment—the employment-to-population ratio—was 58.6 percent, the same as a year ago. It has remained roughly at the same level since late-2009.

These latest jobs and unemployment statistics, however, do not tell the full story of how all Americans are faring in today’s economic climate, as workers with more education continue to be employed at higher rates and earn more than their less-educated counterparts. Indeed, as previous Hamilton Project work has shown, the rates of return to a two- or four-year college degree are high. In recent years, however, there has been increasing concern about students who begin two- and four-year colleges but fail to complete a degree—particularly in light of the large increase in student debt and growing talk about the high costs of college.

In this month’s employment analysis, The Hamilton Project examines whether starting college is worth it for students who fail to complete a degree. Our startling finding is that it is: these students’ lifetime earnings are roughly $100,000 higher (in present value) than that of their peers who ended their education after high school. Measured by the rate of return, getting some college is an investment with a return that exceeds the historical return on practically any conventional investment, including stocks, bonds, and real estate. (Of course, the return to some college is considerably smaller than the return to finishing either an associate’s or bachelor’s degree.) We also continue to explore the nation’s “jobs gap,” or the number of jobs needed to return to pre-recession employment levels.

In addition to increasing the chances of employment, education also has a substantial effect on one’s earnings potential. The graph below shows the average annual earnings of individuals with varying levels of educational attainment. Those with a bachelor’s degree earn a premium of roughly $30,000 each year relative to those with just a high school diploma. Over a lifetime of work, a college graduate with a bachelor’s degree would earn over $500,000 more than an individual with just a high school diploma.

What has not been previously appreciated is that even those who enroll in a two- or four-year program but do not attain a degree also experience substantial increases in earnings. On average, these individuals made about $8,000 per year more than those with just a high school diploma. Over a lifetime, this results in over $100,000 more in earnings. 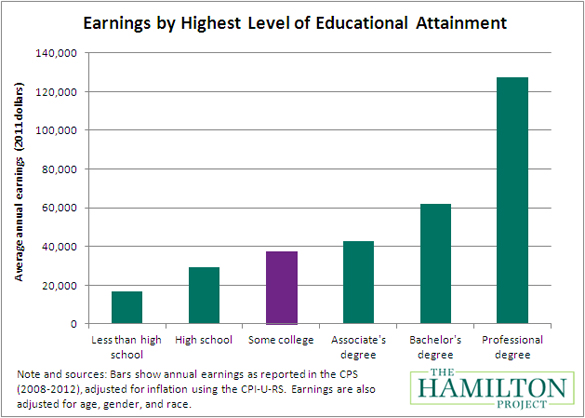 Are the Increased Earnings Worth the Investment?

In today’s job market, where even some college graduates are struggling to find work, many wonder whether the high cost of college is worth the eventual earnings payoff. First, students face the out-of-pocket costs of tuition. On average, annual tuition and fees are about $3,000 at two-year colleges, $13,000 at four-year colleges, and $27,000 at professional degree programs.

But the true cost of college is more than just tuition; it also includes the opportunity cost of being in school and not working, as college students forgo income that they could have earned by being in the classroom. (The cost of college does not, however, include the price of room and board; all individuals must pay for food and shelter regardless of if they are in college.) Between the ages of eighteen and twenty-one, the earnings of individuals with only a high school degree (and not in school) rise substantially, from $8,000 to $15,000—and that’s among individuals that actually have a job. Thus, the forgone earnings associated with going to college are about $49,000 for a four-year program and $20,000 for a two-year program.

Despite these daunting costs, as we showed in earlier work, the annual rates of return of investing in an associate’s or bachelor’s degree are two to three times higher than those from alternative investments including stocks, bonds, gold, treasury bills, and the housing market. But what about students who start college but find that they are unable to complete their degree? Do the costs they incur for achieving some college outweigh any benefits they receive for their years in school?

In the graph below, we extend our earlier analysis to include the returns to investing in a professional degree and investing in some college. The graph shows that, on average, attending some college but not receiving a degree also has a higher return than all other conventional investments. The annual rate of return of an investment in some college was 9.1 percent. This rate of return is more than 3 percentage points higher than the average stock market returns and 7 percentage points higher than the returns from investing in Treasury bonds.

Of course, the high rate of return associated with attending a few years of college does not imply that dropping out of college is a better option compared to completing a bachelor’s or associate’s degree. Graduates with a bachelor’s degree annually make about $32,000 more than individuals with only some college. Instead, what this analysis suggests is that the downside risk of trying for a college degree but not making it all the way to a degree is not that bad, and could still be worth the investment of time and tuition. 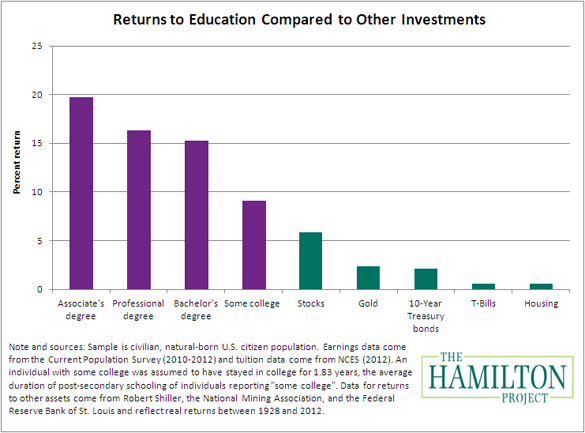 Our method of analysis does not reveal whether college education causes the increased earnings. It is likely that college graduates have different aptitudes and ambitions that might affect earnings. However, a large body of academic research suggests that there is a causal relationship between education and later earnings, and that the investment in education causes the later increased earnings. Our analysis also only looks at the average returns for those who have attended some college; these returns may not apply to potential students considering attending but who have lower levels of preparation or determination than this group. And, naturally, the outcomes for any one person may be higher or lower than these averages.

As of May, our nation faces a jobs gap of 9.9 million jobs. The chart below shows how the jobs gap has evolved since the start of the Great Recession in December 2007, and how long it will take to close under different assumptions of job growth. The solid line shows the net number of jobs lost since the Great Recession began. The broken lines track how long it will take to close the jobs gap under alternative assumptions about the rate of job creation going forward. 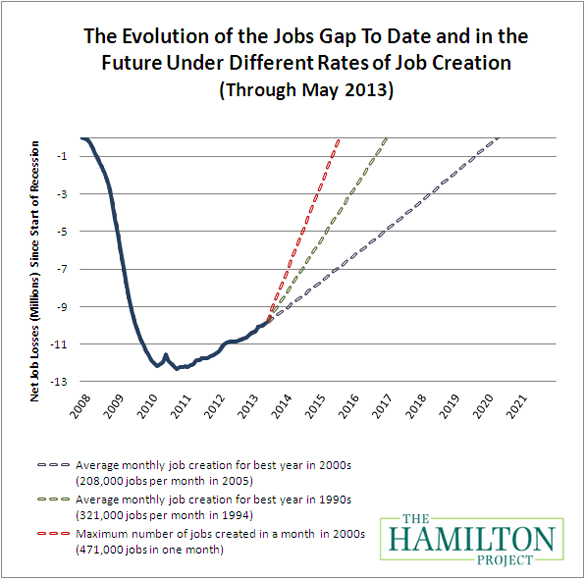 To explore the outcomes under various job creation scenarios, you can try out our interactive jobs gap calculator by clicking here. You can also view the jobs gap chart for each state here.

As the unemployment rate continues to decline, it is important to remember that Americans without a college or high school education are still experiencing above-average rates of unemployment. Addressing this problem requires not only creating new jobs but also ensuring that the workforce has the skills necessary to fill these jobs. Although some people currently question whether the cost of college is worth the investment, the evidence suggests that rate of return is much higher than many alternative investments, even for students that don’t ultimately finish a degree.

Unfortunately, the college attendance and completion rates of low-income students have not kept up with those of their better-off classmates leaving them further behind in today’s challenging labor market. To help shed light on this disturbing trend, The Hamilton Project will host an event this month focusing on the economic imperative of increasing college opportunities for low-income students. As part of the event, the Project will release a new proposal by Caroline Hoxby of Stanford University and Sarah Turner of the University of Virginia that outlines a strategy for identifying promising low-income, high-achieving students and providing them with customized information to help improve their college opportunities. The identification and implementation of policies that increase such opportunities, especially for low-income students, is critical for the economic mobility that is part of the social fabric that has bound our country together. For more information or to register for the event, click here.