According to today’s employment report, the labor market continued modest improvement in November. The unemployment rate edged down to 7.7 percent and has now remained below 8 percent for three consecutive months. Payroll employment increased by 146,000 jobs, about the same monthly pace recorded over 2012 as a whole, but the gain in employment in the previous two months was revised down by a total of 49,000. According to the Bureau of Labor Statistics, Hurricane Sandy had little effect on employment estimates despite its considerable impact on coastal areas. (These figures do not reflect the anticipated update to the payroll data, which will be official in February and is expected to show that the level of employment was 386,000 jobs higher in March 2012 than previously reported.)

As the year draws to a close, policymakers and the media have their sights fixed on the “fiscal cliff,” the federally mandated set of cuts in spending and increases in taxes scheduled to go into effect at the beginning of 2013. Most economic observers agree that, unchecked, this precipitous drop in government expenditures and spike in taxes could send the economy back into recession. What has not received as much attention is that a given level of deficit reduction can be achieved with very different impacts on employment.

In this month’s jobs analysis, The Hamilton Project focuses on how alternative approaches to confronting the fiscal cliff are projected to impact the nation’s employment situation in the coming year. We also continue to explore the “jobs gap,” or the number of jobs that the U.S. economy needs to create in order to return to pre-recession employment levels.

The Effect of the Fiscal Cliff on Job Growth

A wide range of forecasters, including the Congressional Budget Office (CBO), Moody’s, and Macroeconomic Advisers, project that the wholesale implementation of tax increases and spending cuts scheduled to take place at the year’s end would sharply reduce employment. What does this mean from a practical standpoint? If all the policies that compose the fiscal cliff fully go into effect, the job losses would more than erase all of the gains we have made in returning to full employment, as measured by the jobs gap detailed in the next section, since the start of the recovery.

The CBO recently published estimates of just how many jobs may be lost by the end of 2013, depending on actions policymakers take to resolve the fiscal cliff. For example:

Of course, if cutting spending reduces employment, then avoiding these cuts would result in a greater number of jobs. The chart below provides estimates of how many additional jobs would exist in the United States in the fourth quarter of 2013 if policymakers eliminate various provisions of the mandatory spending cuts and tax increases that are elements of the fiscal cliff. 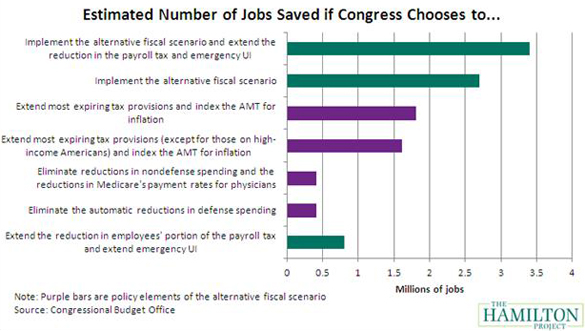 If lawmakers do away with the defense and non-defense discretionary budget cuts, and extend the Bush-era tax rates—a suite of policies known as the “alternative fiscal scenario”—the country would have about 2.7 million more jobs at the end of next year.

The payroll-tax holiday and extended unemployment insurance (UI) benefits, two policies that were enacted during the recovery, are also set to expire at the end of this year. The former is a temporary reduction in the payroll tax that gives consumers more spending money, which stimulates the economy. The latter extends the period that an unemployed worker can claim unemployment benefits.

If policymakers do not implement the alternative fiscal scenario (either in part or in whole) and do not extend the reduction in the payroll tax and emergency unemployment benefits, the CBO estimates that there would be 3.4 million fewer jobs in the fourth quarter of 2013, one year from now, compared to outcomes under the alternative fiscal scenario.

As the White House and Congress go about the necessary task of reducing the deficit as part of a fiscal cliff deal, there are opportunities to choose approaches that are less harmful to the already weak labor market. The chart below is taken from a recent CBO analysis and shows how many jobs would be saved for every $1 million of mandated spending cuts or tax increases policymakers choose to eliminate as part of a budget deal. For instance:

When it comes to preserving jobs, not all deficit-reducing policies have the same effect. For example, letting the Bush-era tax rates expire saves about half as many jobs as a dollar-for-dollar reduction to the deficit through eliminating automatic cuts to discretionary spending. With the currently high unemployment rate, near-term employment impacts are a critical consideration in choosing the best way to confront the nation’s structural deficit problems. 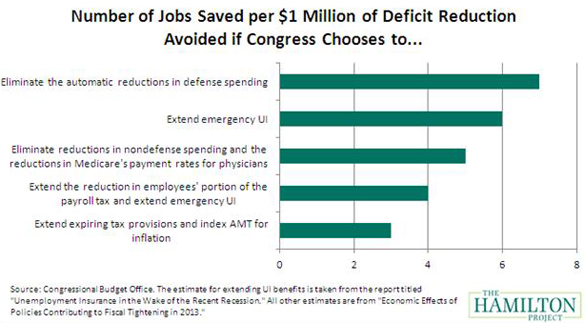 As of November, our nation faces a “jobs gap” of 11.1 million jobs. The chart below shows how the jobs gap has evolved since the start of the Great Recession in December 2007, and how long it will take to close under different assumptions of job growth. The solid line shows the net number of jobs lost since the Great Recession began. The broken lines track how long it will take to close the jobs gap under alternative assumptions about the rate of job creation going forward. 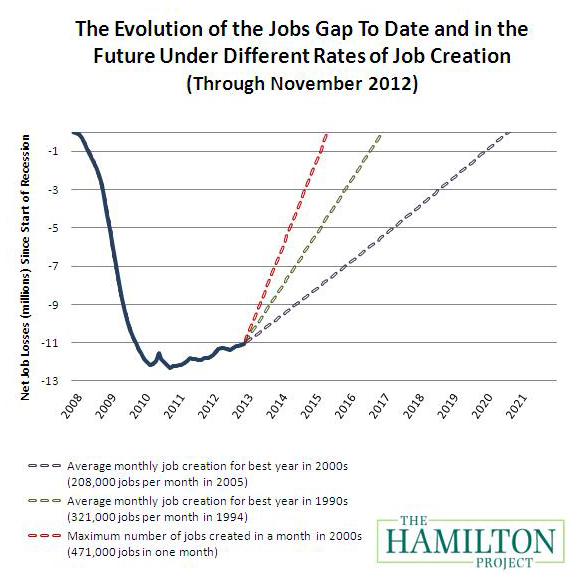 As these last few years have shown, it has taken extraordinary and unprecedented efforts by the President, Congress, and the Federal Reserve Board to steer the economy along the road to recovery in the wake of the Great Recession. Once again, lawmakers are tasked with resolving a crisis, this time one borne of risks associated with large budget deficits and debt, whose resolution will have profound short- and long-term implications for the country. However, with the labor market still weak, the most economically sound approach is to combine credible deficit reduction that takes full effect when the economy is on more sound footing with continued support of the economy in the near term.

If deficit reduction is enacted without also considering its impact on employment, we risk reversing all of the hard-fought gains in the labor market over the past three years. However, by keeping an eye on jobs—in addition to deficits—it is possible to find a balanced approach that advances the nation’s interests on both fronts.

The COVID pandemic and the federal budget