March employment numbers signaled modest improvement in the job market. According to the Labor Department, the unemployment rate ticked down to 8.8 percent and payroll employment increased by 216,000 jobs.

In last month’s posting, The Hamilton Project continued its examination of long-term labor market trends, focusing on earning trends for men over the last four decades. The findings were stark: inflation-adjusted earnings for the median male worker were lower in 2009 than they were in the early 1970s. This decline in earnings was more pronounced when taking into account falling labor force participation among men during that period. This erosion in wages likely reflects both reduced job market opportunities as well as an increased desire for leisure by men—although the evidence suggests the former plays a larger role.

The plight of the median male worker in the United States is significant, but it also raises another key question that we will address in this month’s posting: what has happened to the earnings of women?

In addition, we will continue our look at America’s “job gap,” or the number of jobs that the U.S. economy needs to create in order to return to pre-recession employment levels—while also absorbing the 125,000 people who enter the labor force each month.

In contrast to the decline in earnings for the middle-of-the-road U.S. male, women’s earnings have increased significantly over the past fifty years.  Indeed, with more and more women entering the workforce and pursuing higher levels of education, the earnings of women have increased dramatically. 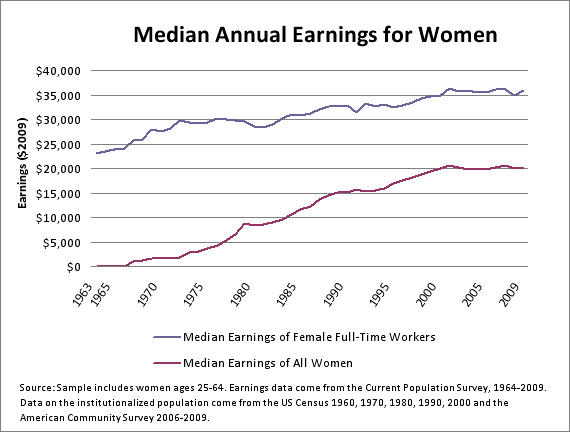 As the chart above illustrates, inflation-adjusted earnings of the median full-time female worker have increased almost 56 percent from 1963 to today (the blue line) and the annual earnings of the median female has increased by roughly $20,000 (the red line). This extraordinary increase is the product of two key trends: the increase in women’s employment and rising wages for working women.

As employment rates for men, particularly lower-skill men, have declined, employment rates for women have moved in the opposite direction. Until the mid-1960s, fewer than half of women worked in any capacity outside of the home. Today, more than 70 percent of American women are working for wages. Much of this increase in work has to do with changes in society, although women are still less likely to work than men.

In addition, women who work full time earn more than their predecessors. When looking at the median earnings for today’s full-time working women the numbers are much higher—about $36,000. While there are many reasons for rising female wages, including a shift to higher-paying occupations, reductions in discrimination, and rising job experience, increasing educational attainment is a particularly important factor.

Over the past thirty years, the market has sent a clear signal that more education translates into higher earnings. Women have been far more responsive to this clarion call than men and are taking advantage of opportunities to enhance their credentials and skill-base. In 1964, fewer than 8 percent of women held a bachelors degree.  As seen in the figure below, today, about a third of working-age women hold a bachelors degree or its equivalent. And younger women are making even greater strides.  In fact, women ages 25-34 are more likely to hold a bachelors degree or an advanced degree than men. According to the U.S. Census Bureau, women represent approximately 58 percent of young adults who hold an advanced degree. This suggests that in the near future, women may hold more of the positions in professions such as doctors, lawyers and college professors. 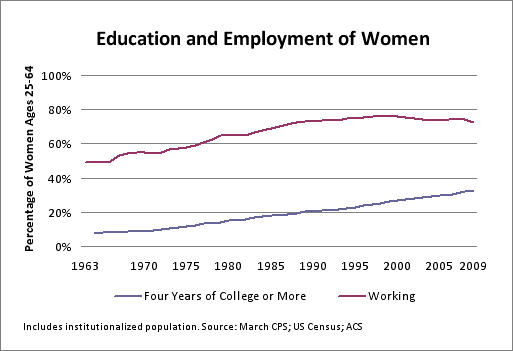 While women have made stunning gains in education and employment during the last five decades, they have not been spared the effects of wage stagnation in recent years. While the earnings of women have skyrocketed from 1964 until the late 1990s, median earnings for women (as shown on the graph 1) have generally stagnated since 2001. Part of this has to do with the flattening, and even slight decline, in the percentage of prime-age women (ages 25-64) working, from a peak of 77 percent in 1999 to 73 percent today.

This is the longest period of stagnation since the statistics for women’s earnings have been compiled.  It seems likely that the great increases in education and labor force participation have helped mask the impact of the forces that have caused men’s wages to stagnate over the last several decades. These forces, which include increased global competition for lower-skill jobs and technological advances that have reduced demand for routine tasks, are now becoming more evident in women’s job market opportunities.  (For a more holistic overview of these trends, we recommend a recent Hamilton Project paper by Professor David Autor of MIT that describes the evidence linking stagnating earnings and declining labor force participation to diminishing job opportunities in many low- and middle-skill occupations.) The success of our economy will be influenced by how these forces shape women’s labor market experiences in the coming years, and how workers respond to changing incentives to invest in schooling and skills.

Finally, while women have made great strides in the workforce, it is also worth noting that a pay gap remains between earnings of men and women. Indeed, full-time working women earn approximately 75 percent of what their male counterparts earn. After taking into account factors such as education, experience, industry and occupation, hours worked and union status, the pay gap had narrowed to 91 percent by the end of the 1990s (according to a recent study), but nevertheless still remains.

In addition to the threat of stagnating wages for both men and women, the United States continues to face a severe job gap of just under 12.2 million jobs.

As in previous months’ postings, The Hamilton Project updates America’s “job gap,” the number of jobs that the U.S. economy needs to create in order to return to pre-recession employment levels while absorbing the 125,000 people who enter the labor force each month.

The chart below shows how the job gap has evolved since the start of the Great Recession in December 2007, and how long it will take to close under different assumptions for job growth. The solid line, in particular, shows the net number of jobs lost since the Great Recession began. The broken lines track how long it will take to close the jobs gap under alternative assumptions about the rate of job creation going forward. 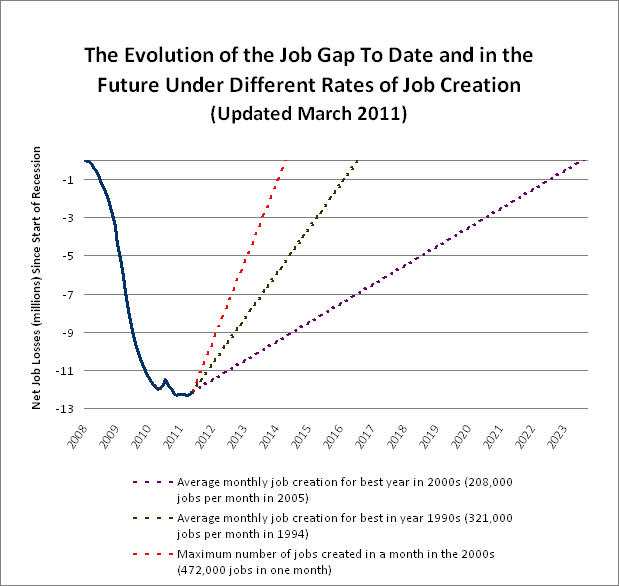 The U.S. economy is doing better, but we clearly have room for improvement. During the past two months we have shown that employment rates and median earnings for men are on the decline. And the number of unemployed Americans remains daunting, with a job gap of just under 12.2 million left to fill.

On a more optimistic note, women have made great strides in the labor market—both in terms of employment rates and median earnings—over the last five decades. American women are responding to market signals and pursuing higher levels of education, making them more competitive in the U.S. and global economies. Women also fared better in the Great Recession and its aftermath. From the start of the recession in 2007, the employment-to-population ratio of women (ages 25 and over) declined by only 4.7 percent—compared with a 7 percent decline among men.

That being said, we are also witnessing stagnation in the median earnings of women. While this is concerning, it is likely a broader symptom of declining opportunities for all American workers. Only after the economy has recovered will we have a better sense about whether other factors are the driving force behind this leveling off for women.

The Hamilton Project will continue to explore policies for putting Americans back to work—to create jobs, enhance earnings, and promote broad-based economic growth in the United States. In the near future, we will take a look at the median earnings for American families over time and the potential implications for our country’s future.