Since George Floyd’s murder by the police in Minneapolis on May 25th, protests have erupted across the US and spread around the world. As demonstrations continue with no end in sight, many have noted that they are the “broadest in U.S. history.” After so many weeks of sustained and sometimes disruptive activism, it is impossible to ignore the fact that these protests are different.

One of the defining characteristics of this heightened contention is the diversity of the participants themselves. Since the beginning of June, my research team and I collected data from protesters in Los Angeles, New York City, and Washington, DC. Across all of the cities and four different days of action, the diversity of this movement is noteworthy. Looking at the data, we find 54% of protest participants to be White. These demographics are particularly noteworthy since they are so much more ethnically and racially diverse than the large-scale protests that were seen as the hallmark of progressive activism against President Donald Trump and his policies, which I document in my recent book, American Resistance. 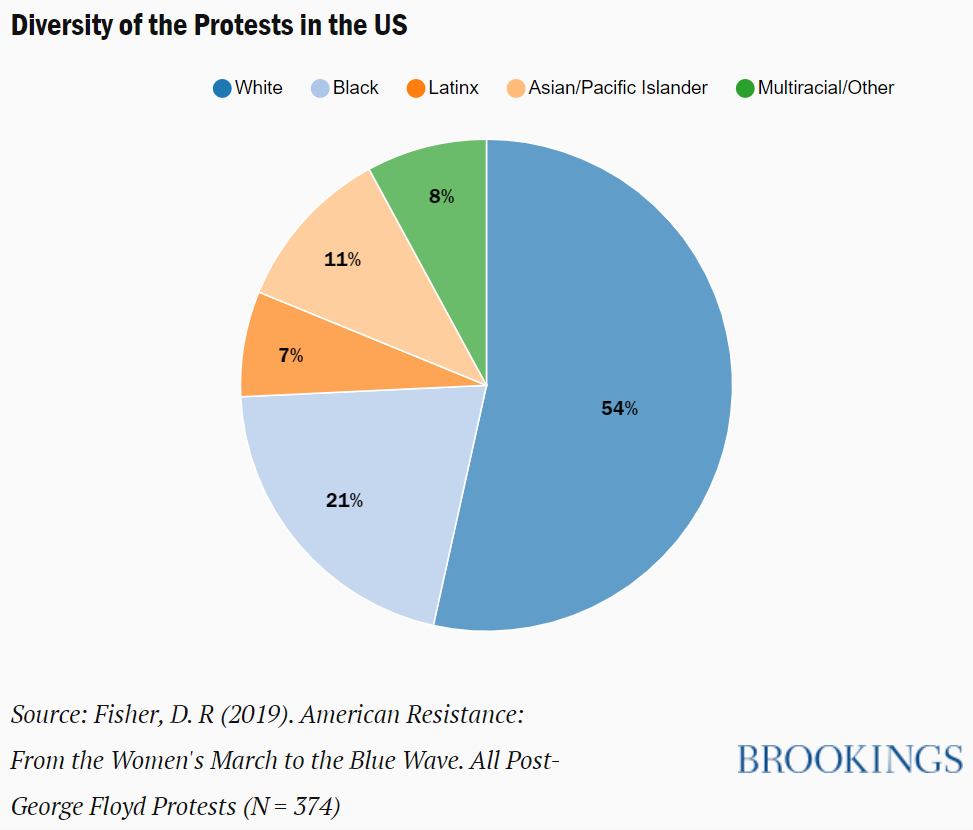 In fact, these protests are more diverse than the March for Racial Justice in fall 2017, as well as the previous moments of protest in the Black Lives Matter movement and the Civil Rights Movement. As sociologist Doug McAdam remarks while looking back over his career studying social movements, “We have never seen protests like these before, in turnout, perseverance, and the ethnic and racial diversity of those participating.”

THE ROLE OF ORGANIZATIONS

The increased diversity of the crowds in the streets is a very good sign for racial equity in our country. It is due, in part, to progressive groups mobilizing their constituents to join the protests in solidarity. As part of American Resistance, I studied the resistance groups that channeled the outrage in the streets into activism around the mid-term elections in 2018.

In recent weeks, those same Resistance groups have sent out messages of solidarity to their networks. They even encouraged progressive activists to join the protests by providing an onramp to the site that coordinated the actions in honor of the holiday celebrating the emancipation of slaves in the US on June 19th: Juneteenth.

Although these progressive groups have not always focused specifically on the issue of racial justice in America, they have contributed to the turnout in the streets by providing information and opportunities for their networks to be White allies and join the struggle for racial equity as individuals and through organizations.

The shift in support for racial equity can also be seen in public opinion data that have been collected since the protests began after George Floyd was murdered in late May.  Pew Research finds that, “two-thirds of U.S. adults say they support the movement,” including the majorities of Black, White, Latinx, and Asian Americans. These findings are particularly strong for people who identify as Democrats.  Our data collected in the streets during these protests also shows a partisan divide in who is turning out to participate, with the overwhelming majority of protesters (80%) identifying as Left-leaning.

Given the partisan divide in perspectives on participation in the protests, there are limited opportunities to channel the outrage in the streets into political gains at the national level using the political levers of legislation or executive order. Instead, the best opportunities for social change happening within the current political system is through the upcoming election in November.

Surveys with activists in the streets show that they are eagerly awaiting the 2020 election. Our data find unanimous support for candidate Joe Biden. Beyond voting for a Presidential candidate who is more likely to support policies related to racial equity, there is evidence that the 2020 election will improve representation in the government by electing more progressive candidates of color.

Despite the many reminders of inequality in 2020, the push for racial equity is clearly gathering momentum. Protesters, progressive groups, and candidates demanding justice and fairness together are a powerful force for social change that has potential to make some serious progress in 2020.

Dana R. Fisher is a professor of sociology at the University of Maryland. Her most recent book is American Resistance, which was published by Columbia University Press in November 2019.

Reflections on police brutality and racial violence in America