The crucial question is whether the push for more infrastructure will raise economic growth and people’s well-being. It could—but only if the focus is on quality and impact and not on the quantity and volume of investment.

Economic policymakers assume that infrastructure—energy, transport, communication, irrigation, and water supply— propels economic output. The direct effect is raising the productivity of land, labor, and other physical capital. For example, steady supply of electricity reduces disruptions and time wasted at the work place. It complements the contributions of education, health, marketing, and finance.

The immediate effect of new infrastructure can be substantial, either by increasing output or stimulating new investment in machinery and equipment. When electricity supply disruptions are eliminated or available hours increased, as seen in Bangladesh or the Philippines, farmers and firms respond with greater supply.

There is a case for sizable investment because a threshold amount is often needed before assets yield services. An example from South Asia is the need to construct a number of tube wells in an unirrigated farming district to affect food output. Scale also becomes important for the delivery of services through connected networks. Returns to investment at one node, such as electricity, depend on the capacity at others, say, roads.

As a review of nearly 300 projects shows, the impact of infrastructure varies considerably by sectors (that is, across energy, transport, water, and sanitation), by types of arrangements (for example, public or private sector) and by countries or sub-regions (see Figure 1). It is such divergences in the results that provide the following lessons on quality. 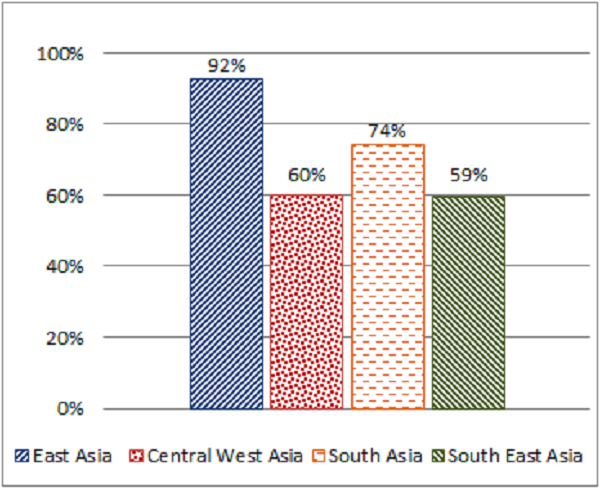 First, project weaknesses affect efficiency and sustainability and pull down the payoffs to infrastructure investments. Delays in project execution are a perennial problem, exacerbated by lenders’ bureaucratic processes and borrowers’ weak management capacity. Adequate financing for operations and maintenance and management of assets are vital for sustainability. Such financing has been a problem—for example in transport and water—partly because of budget limits.

Second, achieving higher payoffs from infrastructure investment is not going to be a matter of just keeping the projects simple. With multiple players, it will be essential to strike partnerships and coordinate. A recent ADB study indicates that the returns to partnerships can be higher than solo efforts because of the gains from synergies. Some ADB supported projects that must have great care, for example those implemented as part of environmental and social safeguard Category A, have also performed relatively well signaling the value of due diligence.

Third, equity of access is also important for the quality of infrastructure. The rich are able to make up for shortfalls in public provision by having water delivered to homes and running residential electricity generators. The poor cannot offset failures in public service delivery as easily. Therefore, for infrastructure to improve economic and social welfare requires equitable access.

Fourth, quality will also be determined by how well the best technologies are employed.  The paradigm in which technology rose linearly alongside income levels can give way to leapfrogging, whereby countries can proceed to advanced technologies before passing through income stages. Low- and lower-middle income countries could tap new off-the-shelf technologies in irrigation or renewable energy. Energy, transport, and land use are primary sources of CO2 emissions, so the use of better technology is urgent.

Fifth, it matters how infrastructure projects are financed. When they are funded through public borrowing, we need to also account for the effect of debt servicing on other investment. For example, use of the capital budget or government borrowing for power and transport could reduce the amount of resources available for funding other government spending, and sometimes lead to macroeconomic instability. Shifting investments from the government’s books to the private sector is not necessarily the answer, as the experience of public-private partnerships and private infrastructure is decidedly mixed.

Sixth, unstable policy environments and weak governance affect returns, especially as the gestation of infrastructure is long. A liberal and predictable business environment is beneficial for reaping investment returns. Studies have shown the links between the success of projects and the clarity and predictability of the climate for investments and good governance. ADB’s infrastructure projects, especially in energy, have done relatively well in both the public and private sectors, but regulatory environments are a factor in explaining the large differences across countries.

Multilateral development banks (MDBs) play a unique role by responding quickly to financing needs with maximum due diligence. But their role goes much further by going beyond what market forces can achieve on their own. In this regard, MDBs must help countries foster high-quality infrastructure, especially in terms of inclusion and sustainability.