When I started to work in development cooperation in the late 1980s, one-third of EU agricultural subsidies—about 10 billion euros annually (equivalent to about 17 billion euros today)—were spent on export subsidies. The EU Common Agricultural Policy was a central planning system with administratively fixed intervention prices for major commodities, huge stocks of cereals and milk products, and high import tariffs. It felt like the West’s imitation of Soviet-style central planning. Paradoxically, despite a sharp increase in subsidies, farmers kept complaining. The main reason being that the EU intervention agencies largely deprived farmers of their rights to work as real entrepreneurs in free markets.

In December 2015 at the World Trade Organization’s (WTO) 10th Ministerial Conference in Nairobi, members finally agreed that export subsidies for agriculture would be abolished. The agreement from December 19, 2015 states that “developed country members shall immediately eliminate their remaining scheduled export subsidy entitlements as of the date of adoption of this decision” and “developing country members shall eliminate their export subsidy entitlements by the end of 2018.” WTO members also “undertake not to provide export credit, export credit guarantees, or insurance programs” for agricultural products. This is the final step in a long journey to end an absurd and harmful system of economic policymaking.

What is the political economy of this system that has harmed so many and benefited so few? Why did it take so long to eliminate export bans?

Export subsidies allowed EU exporters to gain market share in developing countries, put downward pressure on the level of world market prices, and to compete unfairly with local producers in many developing countries. At the same time the EU became a net exporter of agricultural products with price levels far beyond world market prices for many commodities, resulting in huge stocks and budget needs. The EU Common Agricultural Policy has been reformed during the last 20 years with less market intervention, fewer stocks, and hence less need for export subsidies. The EU first agreed to phase out export subsidies in Doha in 2001, but it took until December 2015 to fully eliminate them. As it is, export subsidies no longer matter for the EU (see Figure 1). At the same, time emerging economies began showing growing appetite to introduce export subsidies, including China (cotton), India (sugar), Vietnam and Thailand (rice), due to increasing levels of domestic producer support and consequently rising stocks. 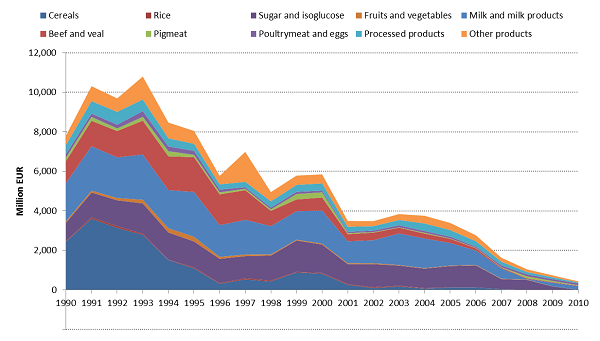 In the late 1980s, when export subsidies started to reach their peak, I worked on livestock development in Western Africa—in Togo, Cote d’Ivoire and Burkina Faso. When I first travelled to the border between Togo and Burkina Faso I followed trucks selling imported chicken meat on local markets without the use of cooling facilities. There were no precautions for proper hygiene, packaging, handling, or refrigeration, with retail prices far too low for local meat producers to compete. These meat imports ruined all parallel efforts to develop and commercialize local meat value chains in the region to improve breeding, feeding, and animal health. 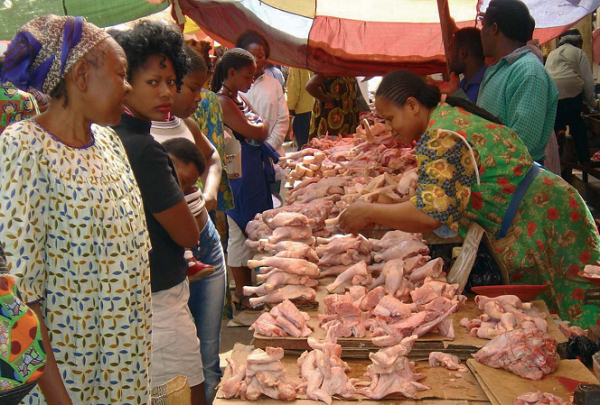 As a son of a farmer, this disastrous impact of EU export subsidies frustrated me. Cheap imports below production costs undermined the development prospects of local producers. Even worse, they destroyed traditional trade relations between livestock producers in the Sahel region and crop producers near the coast. The traditional livestock system in West Africa depends on seasonal movements of animals between complementary agro-ecological zones. This system is producing about 70 percent of the region’s milk, 65 percent of the cattle meat, and 40 percent of mutton and goat meat.

Economists, environmental and development NGO’s, and aid organizations would easily agree that subsidized imports below market prices effectively undermine development prospects of livestock in West Africa. But it took 20 years—and the overhaul of the EU Common Agricultural Policy—to abolish this bad practice of export subsidies.

This means reforms don’t end in Nairobi. To put farmers in the world on an equal and fair footing, further production subsidy cuts are needed. The Nairobi decision is an important signal for policymakers in emerging markets that export subsidies are the least-best solution to support farming interests. Farmers all over the world are willing and able to work hard and to act as real entrepreneurs in competitive local markets and, increasingly, in global value chains. Subsidies for farmers in rich countries and emerging economies undermine fair trade and agricultural development perspectives in poor food-importing countries.