Twice in the past decade, food prices have spiked: first in in 2007-8, and then 2010-11. And food prices on average have been much higher in the last seven years than in the previous 15. In Figure 1, you can see these spikes in food prices, and you can also see where the move toward higher average prices begins when the line first rises above 140 shortly after 2007.

This recent behavior of food prices has led to concern about potentially adverse impacts on child nutrition. The 2012 Global Monitoring Report noted that “even temporarily high food prices affect the long-run development of children,” especially among the poor, in part through malnutrition. So is there reason to be alarmed? 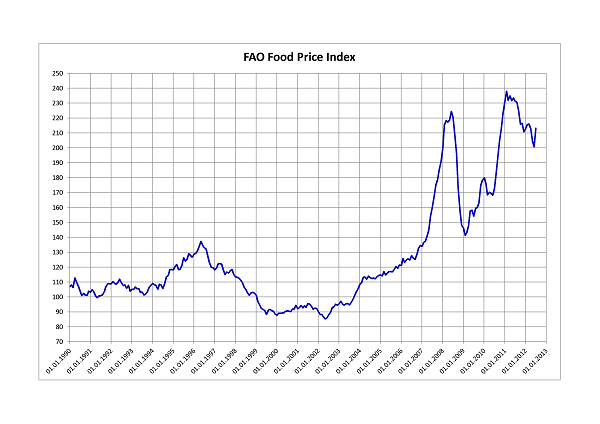 This hypothesis can be tested in a preliminary fashion from recent data on caloric security and child nutrition trends provided in the Global Hunger Index (GHI) database of the International Food Policy Research Institute (IFPRI).  Caloric security can be proxied through a measure of the proportion of the population whose food intake is insufficient to meet minimum dietary energy requirements. This is reported as the “proportion of undernourished” in the GHI database. The 2014 database allows us to compare caloric adequacy for the pre-spike years as an average over 2004-06 and the post-spike years as an average for 2011-13.

Now consider what has been happening to child nutrition. Data on child nutrition (measured as the proportion of underweight children under 5 years of age) are available from the same IFPRI database. Comparing across the pre-spike years (averaged for 2003-07) and the post-spike years (averaged for 2009-13) shows 17 countries experiencing an increase in the prevalence of underweight children.

This finding makes sense once one thinks through the implied links between food price increases, caloric adequacy and child nutrition at the country level.  Regarding the first link, food price increases are assumed to make it more difficult for poor countries to import food, thereby leading to reduced availability. But this assumption may be misleading. Many low-income countries are also food producers and an increase in global food prices could well lead to increased total domestic supply even if some of the incremental supply ends up being exported.

At the same time, child nutrition is affected not just by access to food but also by such factors as health care, sanitation, mother’s education, and so on. It is also possible that these other factors play a larger role than food intake in determining child nutrition outcomes, something that can only be checked through proper econometric analysis.

Given these possibilities, it is not surprising that our preliminary look at the data fails to show an effect flowing from recent food price spikes to child nutrition outcomes through the food availability channel.

Figure of the week: Access to water, sanitation, and hygiene (WASH) services in sub-Saharan Africa