We have all seen the numbers before: Over the coming decades, many countries in the developed and developing world alike will significantly age. One particular number to describe this development is the “old-age dependency ratio.” It measures the number of those aged above 65 years (currently defined as old age) as a share of those between 15 to 64 years (currently defined as working age). In other words, this ratio tells us how many retired people a potential worker has to sustain. With global aging, it will deteriorate dramatically in most countries over the coming decades. This raises serious concerns about the sustainability of pension systems.

Countries like Germany, Russia, and the United States are all experiencing sharp increases. Especially for Germany, the numbers look frightening. While in the 1990s, five (potential) German workers supported approximately one old person (old-age dependency ratio of 0.22), it will be three old people by 2060; the dependency ratio will have tripled to 0.62. Russia and the United States started at a similar levels in the 1990s, but their aging will be somewhat muted, arriving at an old-age dependency ratio of about 0.37 by 2060—still a big change (Figure 1).

Figure 1. More and more older people—but will they also be dependent on others? 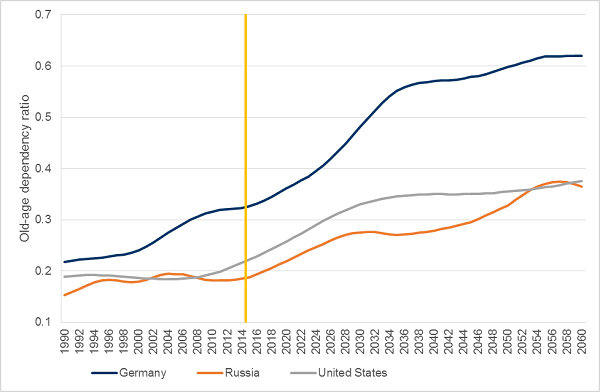 
Note: Old-age dependency ratio measures the number of old (65 and older) per one person in working age (aged 15 to 64).

Are we then doomed to be overwhelmed by old folks who are after the young folks’ money? Will every future worker not only have to work for himself, but also support half (or more) of the income of a retired person? Are we looking at a new society that will be dominated by people dependent on other people’s work and income?

I don’t think so.

The old-age dependency ratio has a fundamental weakness: its current definition still makes us believe that after 65 you become an “old-age dependent.” Yet this will simply not be true in the future.

In the future, we may all be able to work forever. Working lives and the concept of retirement have begun to shift. The “old” of today are healthier than any previous generation, and healthier aging will also allow us to work longer. In fact, the effective retirement ages of many high-income countries have started to increase since the late 1990s. In other words, our increased life expectancy is now translating also into longer work lives, and this trend is expected to continue.

If we all work longer, should we adjust the threshold of the old-age dependency ratio? In the future, will 75 be the new 65, so that we can define the working age population as those aged 15 to 75?

I have a different proposal: Why not get rid of the concept of working age all together? Why limit ourselves, artificially constraining our productive potential to any age, whether it be 65, 75, or 105? Any such age limit will not only define those below it as productive, but also those above is as unproductive; while in reality, each and every one of us has different capabilities, forcing some of us to retire early, but allowing others to work until old age.

It is this diversity among us combined with the increase in life expectancy that should allow us to rethink the concept of working age. This concept was perceived as a measurement of how dependent countries are—how many of us (the old) rely on others (the young) to support their living. Today, though, we have much better measurements of dependency. We have, in fact, rather precise estimates of how many people are active in the labor market, and how many are not, across the entire age spectrum. And not only do we have good estimates of past and current activity rates, but also projections on future activity rates.

This adult dependency ratio—those inactive versus active in the entire adult population, aged 15 and older—gives us a much more positive and less divergent outlook across the three countries examined in this post. While in the 1990s, 10 German workers supported approximately seven inactive adult people (including many women), this number will only slightly increase to about eight inactive adult per 10 workers and even start to decrease around 2050. In Russia, we currently observe about six inactive adults per 10 workers, with a projected increase to about seven until 2050. In the United States, we observe a similar—even more positive—trend. Overall, the adult dependency ratio is a lot more stable than the infamous old-age dependency ratio. Did we get it all wrong on old-age dependency and what is driving this surprising result?

Figure 2. A much more stable outlook when taking into account behavioral change 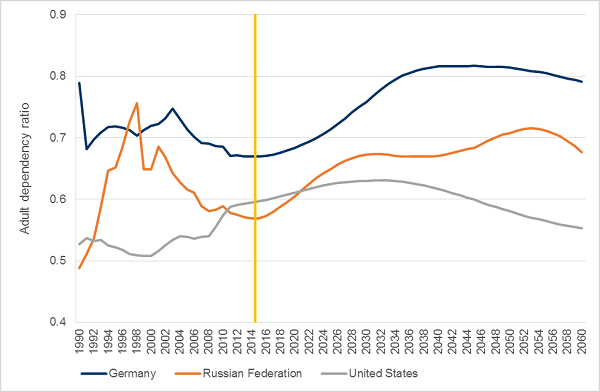 Note: Adult dependency ratio measures the number of inactive (not working and not looking for work) per one active person (working or looking for work) in the adult population (aged 15 and older). Projections take into account past trends of increased participation of women and older people until 2030 and assume a further increase in effective retirement age by 10 years between 2030 and 2060.

Static ratios like the old-age dependency ratio do not account for behavioral change. Our health is getting better and, also at old age, more and more women are joining the labor force. Policies on retirement, too, are changing. All of this has brought more people into the labor market than ever before, and they are also staying in the labor market longer than ever before.

When discussing how dependent countries will be in the future, we cannot simply extrapolate current behavior into the future. In particular, policy can make a big difference. If the current political efforts to limit early retirement, invest in life-long learning, increase statutory retirement ages—all of which will allow and encourage longer work lives—continue, countries will indeed be older in the future, but not necessarily more dependent.

This and other issues related to aging societies are discussed in a forthcoming World Bank book “
Golden Aging. Prospects for Healthy, Active, and Prosperous Aging in Europe and Central Asia
” by Maurizio Bussolo, Johannes Koettl, and Emily Sinnott.