In recent years, it has been exciting to see policymakers in rich countries begin to take seriously what has long been known in the private sector: Paying attention to seemingly trivial details of policy design can powerfully affect how individuals respond.

Take the example of organ donation in Europe (Figure 1). What explains the vast differences in rates of consent? None of these countries provide incentives—no rewards for consent, nor any tax or fine for refusal. Differences in culture and information do not explain the gap either. For example, Germany and Austria have remarkably similar cultures, yet their consent rates differ by 88 percentage points. And the Netherlands ran an extensive educational campaign and mass mailing asking citizens to register as organ donors, but the campaign failed to change the effective consent rate. 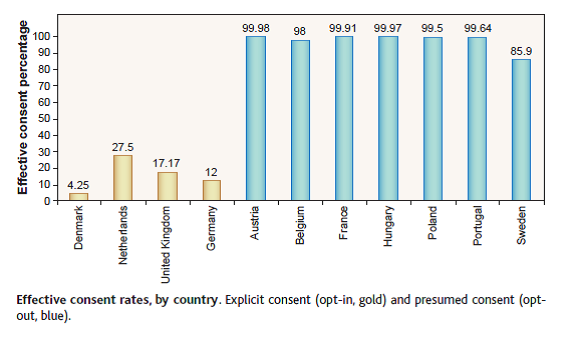 What then can explain the large differences in the consent rates? The answer turns out to be the default option—whether a person has to choose to be an organ donor (“opt-in”) or choose not to be one (“opt-out”). A person has to opt-in to be an organ donor in the gold countries in the figure, whereas in the blue countries there is presumed consent from which a person can opt-out.

Traditional policymaking would not predict the default option to have a large effect. Standard “rational actor” models assume people behave based on pre-formed preferences. They know what they want and if it is not the default option, they will opt out of the option.

A new wave of public policymaking informed by behavioral economics and psychology submits the assumptions of the rational actor to empirical scrutiny. Public debates are now assessing the introduction of behavioral interventions (interventions based on a non-rational or non-selfish actor) in many domains, including organ donation, taxes, retirement savings, and employment schemes.

In the spirit of such innovative programming, the World Development Report 2015:  Mind, Society, and Behavior examined hundreds of studies, and organized the many strikingly successful interventions they found around three ways that people think:

To see how powerful insights into human psychology can be for policy, consider an intervention in Kenya aimed at preventing traffic accidents. As shown in the graph from The Economist, traffic accidents in poor and middle-income countries have become a major public health problem. They kill more people than tuberculosis and malaria and are forecast to kill as many as HIV/AIDS by 2030. 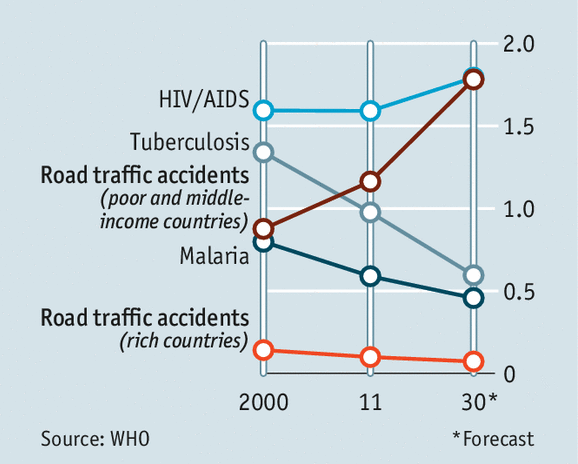 Source:  The Economist, based on WHO data.

What can be done? Traditional interventions—harsher penalties for reckless driving, stronger enforcement mechanisms—can be costly and often have little independent effect. In Kenya, practitioners and researchers collaborated to place stickers in accident-prone buses. The stickers urged passengers to speak up against reckless driving. 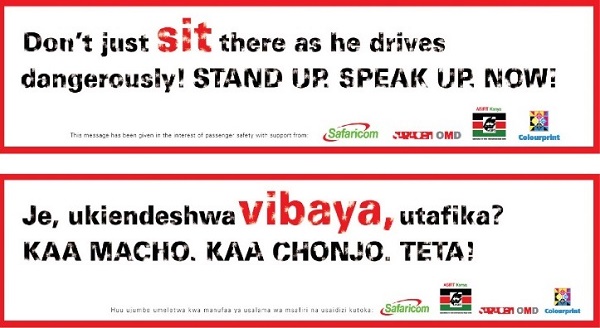 Accident rates in buses that had stickers plummeted. Why? People knew that buses were dangerous before the intervention. In a passenger survey before the intervention, one-third of respondents reported having felt that their lives were in danger on a recent trip. But the bus stickers changed something in the environment. The seemingly trivial change of posting a sticker transformed the behavior of the drivers. It saved lives at a cost per year of a life saved—$5.80—that was even lower than the cost of saving lives through vaccines.

Examples like this demonstrate that behavioral economics has the potential to revolutionize development policy. Many interventions documented in the WDR can be scaled up. The new field of behavioral development economics should be expanded with care, however. To list just three considerations:

With these and other considerations in mind, there is a large potential for behavioral interventions to enhance the effectiveness of development institutions. The WDR provides a new framework for the subfield of behavioral development economics. It will be exciting to see what progress is made in this field in coming years.