What does China’s growth slowdown mean to you?

I ask here not about the New World Order, global power shifts, or whether the United States retains its position as a global hegemon. Nor do I mean the impact on the world economy, a colossal actual thing, but still a relatively abstract concept. 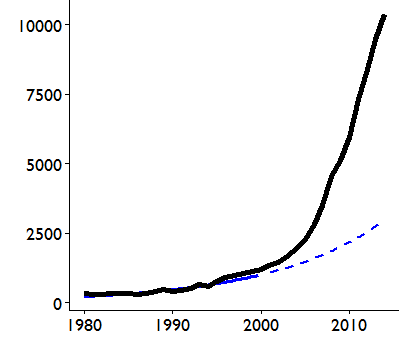 I mean: What does this slowdown in 2015 mean for you, in the rest of the world, looking to China as an export market; or you, in China, seeking employment as your economy’s labor market adjusts to its New Normal?

In 2014 China’s GDP grew 7.4 percent, its slowest rate of increase since 1990. This seems an epic change from when that economy regularly turned in double-digit growth. The effect of this slowdown on those who sell to China and on those working in China must be extreme.

But maybe not. Why? Let’s do the arithmetic.

Suppose the year is not 2015 but 2005, exactly a decade ago, and you are an exporter, somewhere in the rest of the world, predicting China will grow, say, 12 percent over the coming 12 months. China’s GDP then was $2.3 trillion at market exchange rates.

(Since you are selling to China, you don’t care about Purchasing Power Parity correction. What matters to you are nominal values at market exchange rates, i.e., in this case the size of China’s footprint in the global market place at rates of exchange that see actual financial value changing hands.)

You expect China’s marketplace will increase by $274 billion (12 percent of $2.3 trillion). Whatever fraction of that market you sell to, that’s what counts for your bottom line.

Now, fast forward to 2015. China’s growth might be as low as 7 percent these next 12 months. But, in the meantime China’s economy has become a lot larger than it was in 2005. How much larger? The IMF’s October 2014 World Economic Outlook forecasts that for 2015 China’s economy, at market exchange rates, will come in at $11.3 trillion. At this scale, growth of a mere 7 percent will increase the size of China’s footprint in the global economy by $790 billion over the next 12 months.

To put matters in perspective, this increase of $790 billion is 2.8 times the size of the increase of $274 billion 10 years ago. Thus, even at an expected growth rate a full five percentage points lower than what someone a decade ago might have optimistically forecast, China will generate economic growth in absolute magnitude almost 3 times larger than it did then.

But, wait, the world today overall, not just China, has changed. A representative exporter will gauge prospects for selling to China based not just on China’s scale, but also that of their own economy. Let’s do the arithmetic on that.

Suppose you are an exporting business in the United States. Ten years ago the U.S. GDP was $13.1 trillion; the IMF reckons that in 2015 the U.S. economy will produce GDP equal to $18.3 trillion. Relative to the size of the U.S. economy, China’s expected 7 percent expansion in 2015 will be an increase in a potential export market of 4.3 percent; ten years ago, that same ratio was just 2.1 percent. Put differently, China’s expansion over the next 12 months—even at only 7 percent—will represent for a typical U.S. exporter, relative to the economy he lives in, more than a doubling of the increase in size of this potential export market.

What if you are not in the U.S.? If you are in the EU, China’s expansion is even more of an increased opportunity. Only if you are a fast-growing economy like those of the ASEAN-5 does China’s 7 percent growth mean something not quite so large. But even then, the worst you can say is that China’s 7 percent growth means you can expect simply the same relative increase in export business with China as you did a decade ago. Hardly a catastrophe.

(Table 1 traces out a range of numbers, confirming that the positive outcome I have just described for the U.S. and the EU continues to hold even if China went to 6 percent growth—only a little bit less so. Of course if China’s growth comes in at 8 percent, the news is correspondingly better.)

Finally, what about the capacity of China’s economy to create jobs? In 2013, the latest year reported in the World Bank’s World Development Indicators, China’s labor force numbered 793.3 million. China’s average productivity (using IMF World Economic Outlook GDP numbers) was, therefore, $11,900; this had grown by 12 percent from the previous year. If productivity were to continue to grow at that same rate, then an expansion of China’s GDP by $790 billion will generate 53 million new jobs. Since China’s rural population is about 500 million (slightly less than half of its total population), if all those 53 million new jobs were urban, this would still absorb 10 percent of the rural population as migrants.

(Again, Table 1 shows what would happen for variation around this scenario.)

One can of course imagine scenarios where China’s slowdown ends up much worse for, say, ASEAN, than that indicated here. If spillovers (not because of trade connections but something else) unfurled across the rest of the world as a consequence, then a China shock would come with far more damaging effects on ASEAN economies. But just as plausibly, a China slowdown might itself be caused by, perhaps, a resurgence in U.S. manufacturing. Then the overall effects on ASEAN countries or anywhere else in the world will depend on the relative strengths of the two opposing effects: the U.S. driving ASEAN exports against China slowing them. However that unfolds, the final effect on ASEAN will not be caused by just a slowdown in China’s growth. Finally, if China’s growth slows from having switched to greater reliance on domestic consumption, then export opportunities for the rest of the world will simply be correspondingly larger.

Kevin Rudd and David Dollar
Monday, May 2, 2022
Get daily updates from Brookings