In 2005, billionaire hedge fund manager Eddie Lampert acquired a large portion of Sears Holdings, the parent company of Sears and Kmart, among other brands. In 2008, Lampert reorganized the company into 30 autonomous business units that would operate like independent businesses, with their own IT contracts, marketing officers, and most importantly, annual financial statements. The idea was that having each unit compete for resources would drive better decision-making and boost profits overall. The exact opposite happened. The divisions turned against one another, making decisions that benefited their divisions at the expense of others. In the year after Lampert’s acquisition of Sears, the company thrived, but two years later, profits tanked, the share price plummeted, and hundreds of stores were closed. As Jillian Popadak explains in a new paper about corporate culture and firm value, erosion of corporate culture may be to blame.

It’s not the case that decentralization is always bad—some large technology companies take this approach—but in Sears’s case, the reorganization changed the norms and culture for employees, dis-incentivizing collaboration at the expense of the overall firm. Popadak notes that former Sears employees speak to this: they said the change created a “warring-tribes culture” that lacked cooperation, and “the result was confusing to the customer.” Media accounts tell a similar story. Accounts detail managers cutting floor staff to save money, intense rivalries over the space in the weekly circular, resulting in nonsense product combinations, and a paltry one percent investment in capital expenditures. Popadak argues this is an example of how important implicit norms can be when they are working to create value at the company. When the explicit emphasis on performance was introduced, it “overpowered the implicit values to collaborate, satisfy the customer, and not act selfishly.”

How can you tell if a firm’s culture creates long-term value, or even measure something so seemingly unquantifiable? Popadak argues that while corporate governance measures are designed to change the explicit rules at a company, the culture is a set of implicit rules that govern employee behavior: the expectations employees have about what it takes to be successful at the firm. In her paper, Popadak collected millions of reviews from job sites like Glassdoor.com, Payscale.com, and CareerBliss.com by year and firm, and then used the text of the reviews to create measures of firm culture based on six categories: adaptability, collaboration, customer-orientation, detail-orientation, results-orientation, and integrity. She then assessed how these measures changed when a firm underwent a governance change. 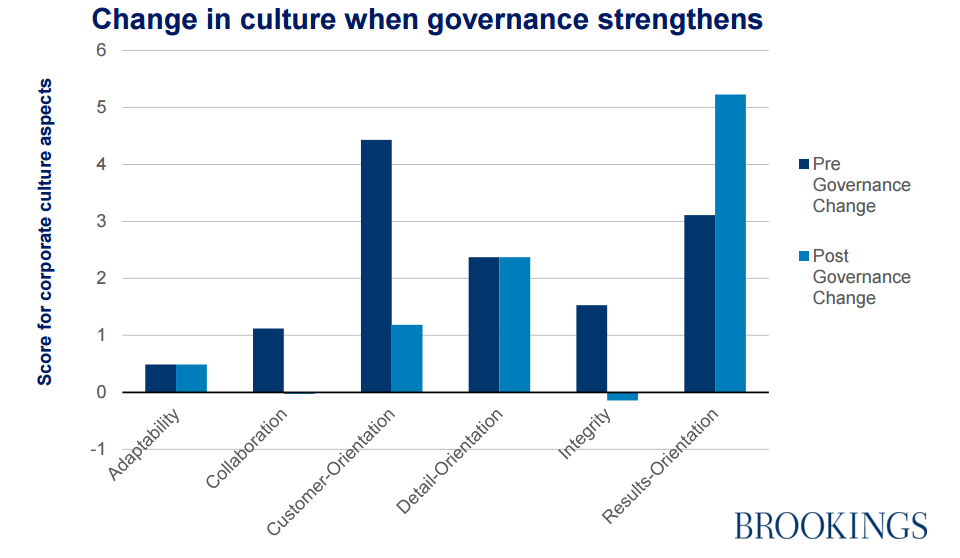 Popadak writes of this graphic, “The figure shows that firms with stronger shareholder governance exhibited statistically significant increases in results-orientation but decreases in customer-orientation, integrity, and collaboration in the year following the governance change.” In the short term, a move to results-orientation boosts sales growth and payout in the short term, but in the long term, there are “significant declines in intangible value, customer satisfaction and brand value.” Ultimately, Popadak concludes that sacrificing corporate culture for short-term payoff may not be worth it.