After a decade when most Americans saw their incomes decline, the latest Census Bureau income data contain very good news: A majority of U.S. households racked up healthy income gains in 2013 and 2014. The facts may not fit the narratives of Donald Trump, Ted Cruz, or Bernie Sanders, but they do help explain why President Obama’s job approval and favorability ratings have finally passed the 50 percent mark. They also show that Hispanic households made more income progress in 2013 and 2014 than any other group, which may be one reason for their growing support for Democrats. A third surprise: households headed by Americans without high school diplomas racked up their first meaningful income gains since the 1990s, thanks to the large job gains in 2013 and 2014 and the Obamacare cash subsidies beginning in those years.

These findings all come from using the Census data on the median incomes of American households by the age, gender, race and education of their household heads, to track their income progress as they aged from 2009 to 2012. I focused first on millennial households headed by young women and men who were 20-to-29 years old in 2009, which makes them voters ages 27-to-36 today. For decades, younger households have been the group with the fastest-rising incomes, and the recent period is no exception. Despite colorful stories of millions of young people living in their parents’ basements, the data show that the household incomes of these millennials (adjusted for inflation) grew 3.6 percent per-year from 2009 to 2012, and those gains accelerated to 4.5 percent per-year in 2013 and 2014. 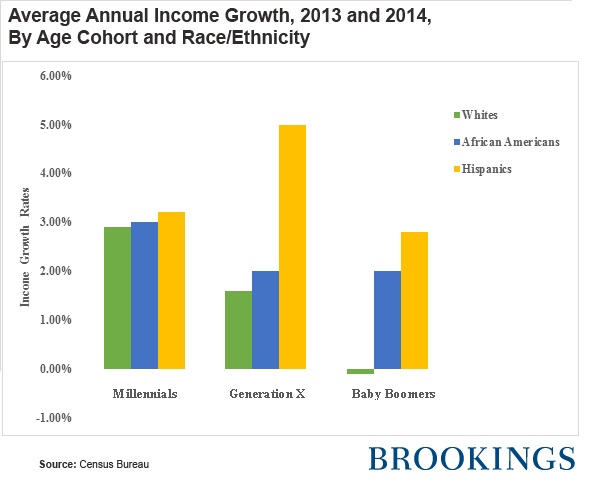 The data also show that the incomes of millennial Hispanic households grew 5.4 percent per-year in 2013 and 2014, outpacing the progress of white and African American millennial households of the same ages. To be sure, not all millennials did nearly so well: The household incomes of those without high-school diplomas, which had declined an average of 1.0 percent per-year from 2009 to 2012, rose 3.1 percent in 2013 and 2014—while the incomes of households headed by millennials with high school diplomas or college degrees grew 5 percent per year. Two main factors are at work here, and in the big gains by Hispanic households. First, businesses created almost 2.5 million net new jobs in 2013 and 3 million more in 2014, and such strong job growth disproportionately helps those at the economy’s margin. Second, Obamacare’s cash subsidies for lower-income households kicked in the same years, and Census counts government cash subsidies as a form of income.

The Census Bureau will release the 2015 income data in a few months. We already know that the economy created another 2.65 million new jobs in 2015. If, as expected, the broad income progress seen in 2013 and 2014 persists in 2015, it will rebut much of the economic message touted by Trump and badly weaken Sanders’s critique of Hillary Clinton. The economic progress of Hispanic households may be particularly harmful to Republican fortunes in November, given the hostility of the leading Republican candidates to immigration reform. Moreover, even if these data do not penetrate the campaigns and the media that surround them, American voters know when their own incomes have improved—and that will alter the landscape for next November in ways almost certain to favor Democrats and their nominee.