My Brookings colleague Sarah Binder and her coauthor Mark Spindel have an important new paper out today: “Independence and accountability: Congress and the Fed in a polarized era.” They ask who in Congress seeks to alter the Fed’s structure or responsibilities and when they do it. They provide answers backed up by an impressive new dataset encompassing 879 bills introduced by 333 lawmakers in the House and Senate between 1947 and 2014 that address the power, structure, and governance of the Federal Reserve.

For Binder and Spindel, the Fed should be understood as a political institution, which is not equivalent to a politicized or partisan one. What this means is that although the Fed prizes its removal from everyday politicking, as an institution it has been repeatedly reshaped by congressional action, and it can expect to enjoy its vaunted independence only when it maintains the respect of political actors and their constituents.

When does Congress make serious efforts to alter the Fed? Intuitively, legislators should do so when the political rewards are largest, which will be when the economy is in trouble and citizens want their representatives to take dramatic action to set things right. The data bear this out: during good times, Congress leaves well enough alone and often hails the importance of central bank independence to long-term prosperity. When conditions worsen (as measured by the misery index, which sums unemployment and inflation), members introduce more bills targeting the Fed, sending a clear signal to the central bank that short-term economic anxieties may outweigh fine-sounding theories of independence unless it delivers growth. 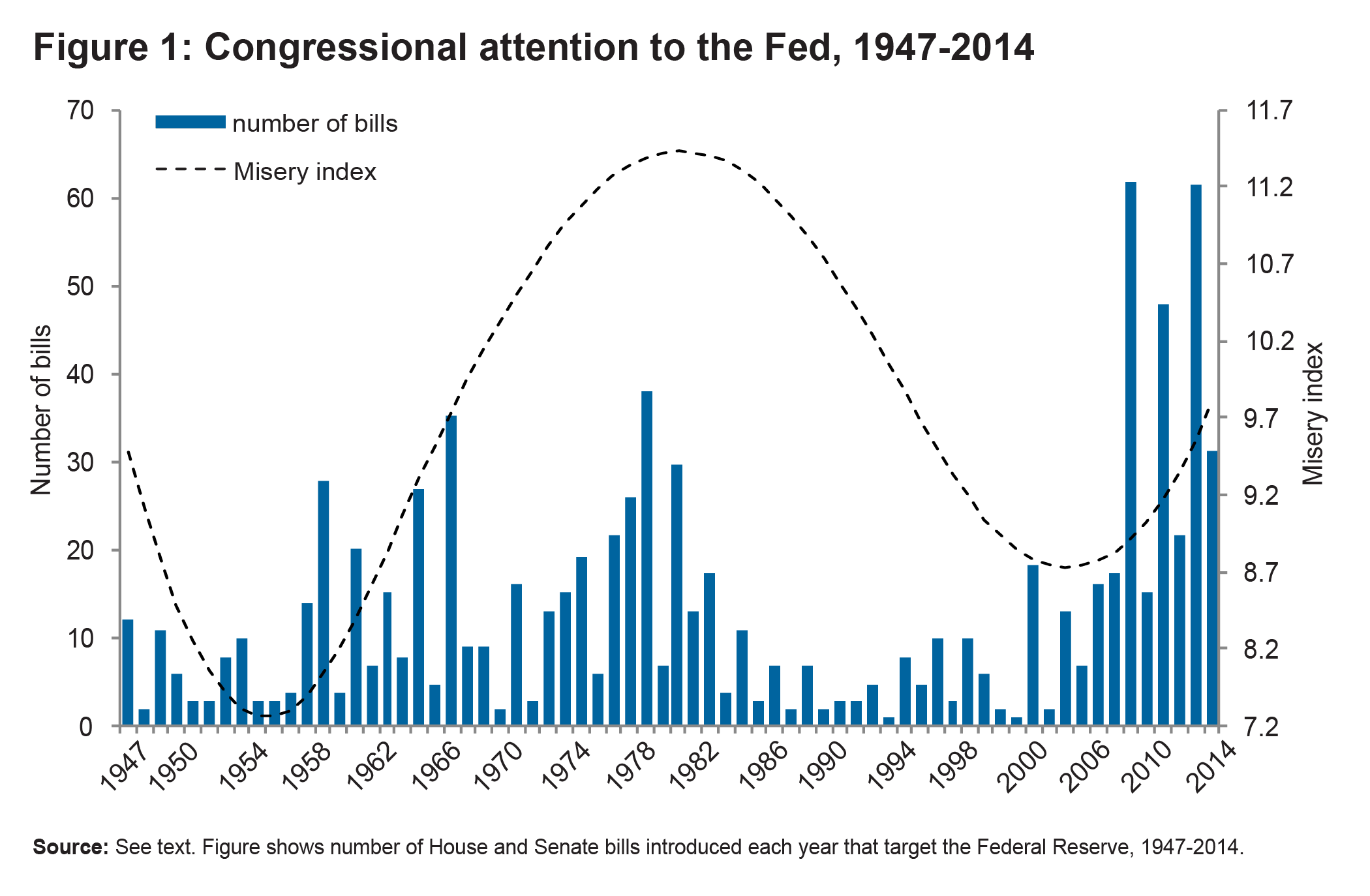 One of the paper’s most intriguing sections looks at the politics around the specific issue of auditing the Federal Reserve System. Far from being a novelty in the wake of the recent financial crisis, over the past half century there has been a steady drumbeat of bills seeking to implement and then widen the scope of GAO audits of the Federal Reserve. In the mid-1970s—not coincidentally as the country began to suffer stagflation—many members in Congress pushed for audits of all of the Fed’s activities. Since 1978, a compromise has remained in place in which all of the Fed’s activities other than its monetary policy functions are subject to annual GAO audits, but plenty of Fed critics on both sides of the aisle have found this arrangement too forgiving of the insulated central bank and pushed for more comprehensive audits.

Binder and Spindel characterize the lawmakers who have supported intensifying scrutiny of the Fed as “odd bedfellows.” They mean “odd” in that very conservative Republicans and very liberal Democrats have often joined forces on Fed transparency issues, which is difficult to understand in the terms of partisan polarization that dominate so much of our recent politics. 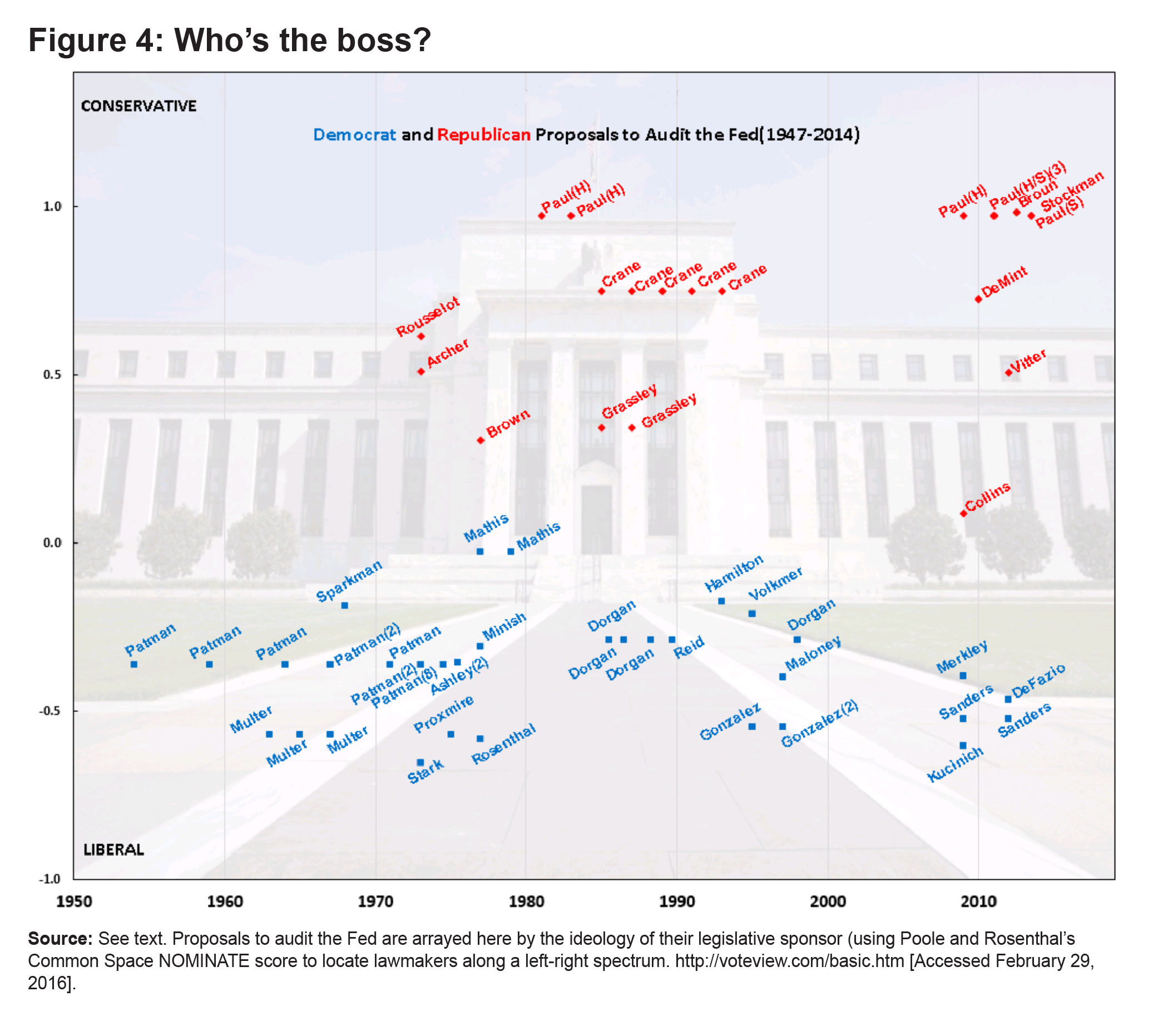 I’d submit that this group isn’t quite as odd as the partisan lens makes it seem, however. Orientation toward the Fed is perhaps the clearest marker of a new divide now becoming prominent in our politics, in which the two sides are those that trust our central governing institutions and those who strongly suspect them of being corrupted. The media’s favored terminology now seems to be “establishment” vs. “populist,” but for banking issues in particular “Hamiltonian” vs. “Jacksonian” would be especially fitting.

When we look at the audit bill sponsors in the figure above, we see a varied cast of characters, but there are a few stand-out groupings. The largest group is of southerners, with sponsors from Alabama, Georgia, Kentucky, Louisiana, Missouri, South Carolina, and especially Texas, which produced three of the most persistent Fed critics, Democrats Wright Patman and Henry Gonzalez and Republican Ron Paul. Next largest comes from the rural Midwest: Indiana, Iowa, Michigan, North Dakota, and Wisconsin. Both of these regions are home to deep suspicions of the moneyed interests of the industrial northeast, and so it is not entirely surprising to see members of both parties representing this strain of thinking.

A few of the other audit sponsors shown clearly share this bank-skeptical outlook, even if not for geographic reasons: in recent years Carolyn Maloney (NY), Dennis Kucinich (OH), and Bernie Sanders (VT). Earlier geographic outliers also tended to strongly distrust the Fed: Brooklyn Democrat Abraham Multer, who apparently had plenty of zeal to expose the Fed as corrupt; Queens Democrat Benjamin Rosenthal, who made his name as a consumer advocate; Toledo, Ohio, Democrat Lud Ashley, an advocate of public housing; or on the Republican side John Rousselot of California, an avowed Bircher, or the hyper-conservative-before-it-was-hip Phil Crane of Illinois.

Political scientists and lay observers alike ought to begin putting the trust-distrust orientation front and center in their analyses of politics surrounding the Fed, which tend to be more polarized along this axis than along our familiar partisan spectrum. Through this lens alliances between, say, Representatives Alan Grayson (D-FL) and Paul Broun (R-GA) don’t look nearly so strange: though in many ways they are ideological opposites, there is little daylight between them in thinking that the Fed is out to rip off Main Street on Wall Street’s behalf.

Where does this framing leave us? Well, Binder and Spindel make it clear that nothing about the Fed’s current institutional configuration is set in stone. As my book emphasizes, for a number of reasons the Fed has faced a political legitimation problem since the crisis, and it has been surprisingly slow in overcoming it as our economy has healed. If distrust of the institution becomes the dominant position, transcending its normal geographic strongholds, we should expect significant changes, and probably not ones that would be to the Fed’s liking. The politics of monetary policy—illuminated by the Binder and Spindel paper in far more ways than I’ve noted here—are going to be very interesting in years to come.