Lost in all the attention to the presidential race is the fact that there are other primaries going on as well—those that determine who runs for Congress in both major political parties. As we did in 2014, the scholars here at Brookings are studying each and every candidate in a congressional primary. Why? In a two-party system it is important not just to understand the differences between the parties but also those within the parties. Since American political parties are “big tents,” studying the congressional primaries provides a unique perspective for analyzing the competing factions within each tent.

So far this cycle, we have coded 307 Senate and House candidate websites from 6 states (plus the North Carolina Senate primaries) and included all candidates appearing on candidate lists provided by either state secretaries of state or state political parties. Our tallies show that there were more Republican non-incumbents (110) than Democrat non-incumbents (87). In this sample of early congressional primary states, there were 56 Republican incumbents and 26 Democrat incumbents on the ballot this cycle.

Unsurprisingly, the longest ballots were in open seat districts: 15 Republicans fought for the seat vacated by Speaker Boehner in OH-8, nine Republicans tried to fill the seat left by retiring Rep. Randy Neugebauer (R) in TX-19, and six Democrats battled it out to replace retiring Rep. Rubén Hinojosa (D) in TX-15. In these districts especially, factions have been warring in both tents. While both Texas nominees will be decided at a later run-off, Tea Party Express-endorsed Warren Davidson won the Republican nomination for the Ohio seat formerly held by Boehner. 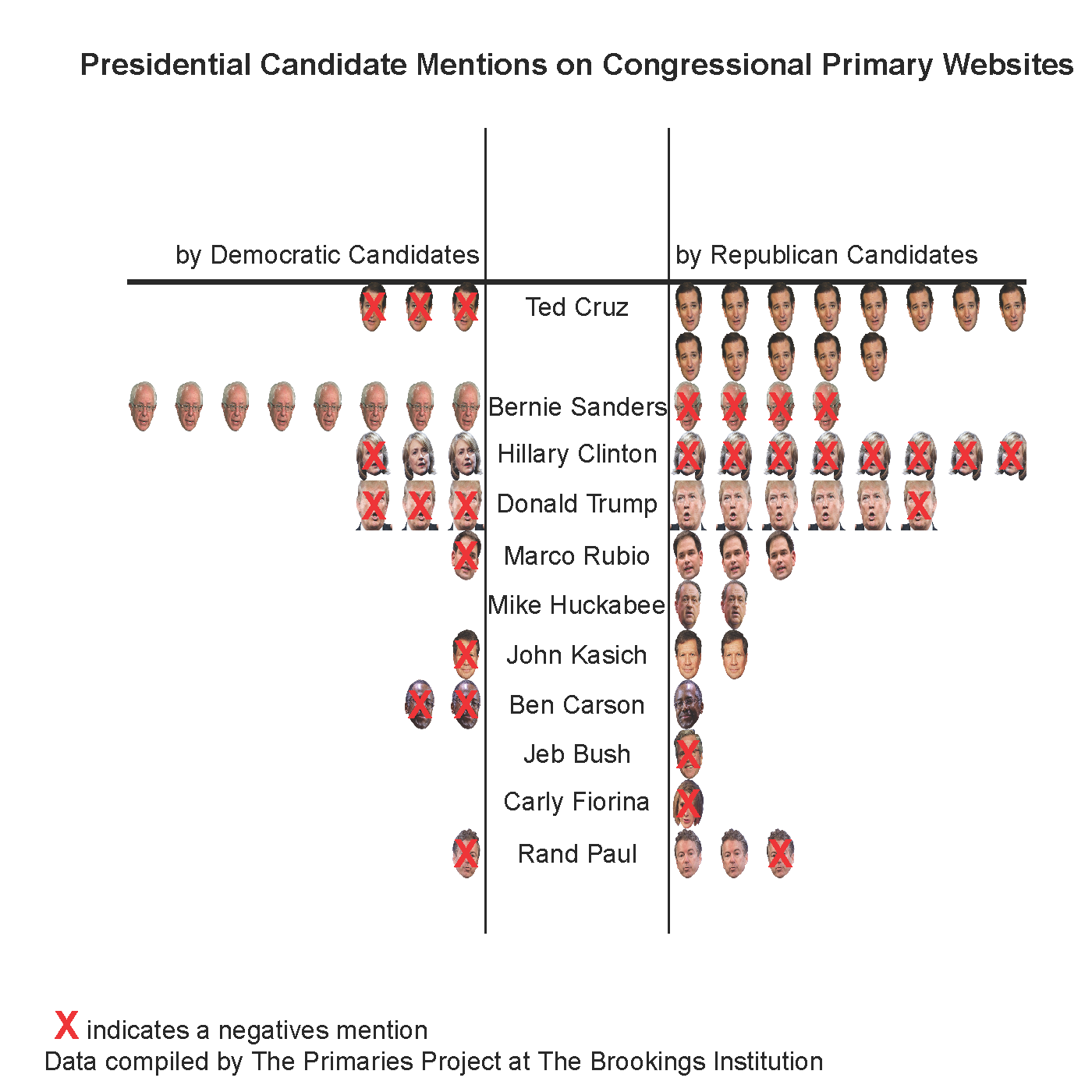 Ted Cruz appears to do pretty well with wanna-be congressional candidates but we shouldn’t conclude that the party has decided yet— Cruz’s home state of Texas is by far and away the biggest state that has held congressional primaries so far. It’s not too surprising that the Republican candidates vilify Hillary Clinton on their websites and it’s not too surprising that a handful invoke Trump. For example, Jimmy Giles, running in the Republican primary for Mississippi’s 3rd district, tells voters to “Make America Great Again” and characterized the primary as between “Jimmy Giles and Donald Trump (REBELS) versus Gregg Harper (LIAR, BABY KILLER, TRAITOR).” Giles lost on March 8 to the incumbent Gregg Harper 89% to 11%. No early coattails here.

On the Democratic side, favorable mentions of Bernie Sanders may indicate an awakening on the left of the Democratic Party. One Illinois candidate wrote, “We now know that Mr. Trump now will be at the top of their ticket and we know exactly where he is coming from. We also know the platform and philosophy of Senator Sanders is the key to winning over the type of voters that Trump is appealing to. This is the only way that we can win the upcoming race.” But Marshall’s praise of Sanders didn’t do him much good. Marshall lost on March 15 to Amanda Howland, 66.9%-33.1%.

Eventually we’ll be able to look at all of the candidates who ran in congressional primaries and measure the effect of Donald Trump on the Republicans and Bernie Sanders on the Democrats. It’s possible these outsider candidates will have inspired more like-minded candidates to jump into the race for the first time. Even if these candidates lose congressional primaries, they can send a message to members of Congress to always be looking over his or her shoulder for the next challenge from the left or right—especially if the challenger does better than expected.

We’ll be monitoring what the primary candidates are saying as the year goes on. Even after the presidential primaries are over in June, congressional primaries continue throughout the summer and into the fall. This is just an early look. Hopefully by November we’ll be able say something significant about the factions within each party. Is the Tea Party still alive and well on the Republican side? Did Bernie Sanders start a political revolution on the Democratic side? Trying to find some clarity to these questions will help us understand the next stage of American politics. Stay tuned.