Last week, Senate Majority Leader Mitch McConnell said it was “highly likely” that the Senate would confirm no more of President Obama’s appellate court nominees. It has confirmed none this year (and only four district judges). A McConnell spokesman walked back the prediction, albeit cautiously: “…we’re going to continue to do judges…There’s not a shutdown. We probably will have a circuit court nominee.”

There will be at best few appellate confirmations this year, and fewer next year. That, however, may be due less to the majority’s not bringing nominees up for votes and more to the majority’s refusing to allow the administration to submit nominees for vacancies in their states. (Thirty four of the 50 Senate delegations have at least one Republican senator.)

All eight nominee-less circuit vacancies now in place are in states with at least one Republican senator and most are several years old.

Obama has appointed 53 circuit judges, as had George Bush at this point in 2007 (including three in the first half of the year). Bush appointed 60 in all.

In January 2009, 40 percent of the circuit judges in full-time active service were Democratic appointees, a figure now at 56 percent. Perhaps a Republican desire to keep that figure from going higher explains the confirmation shutdown rumblings. (The party-of-appointing-president breakdown among active judges means less than meets the eye, but it’s still important.)

Senate tradition has long given home-state senators of both parties an out-sized role in judicial nominations. Today, either senator’s disapproval of a nominee (usually indicated by not returning a “blue slip” to the Senate Judiciary Committee chair) means the committee will not process the nominee. Presidents are unlikely to submit nominees whom home-state senators actively oppose (or who insist on a nominee totally unacceptable to the administration).

There was a time when home-state, opposition-party senators rarely blocked a nominee, partly to ensure similar treatment when their party occupied the White House and partly due to Senate traditions of comity and cooperation, all but dead in this era of political polarization. While one not privy to White House-Republican senator negotiations over nominees can only speculate, circumstantial evidence suggests hard bargaining at the least, and perhaps no real bargaining at all.

There are currently nine vacant circuit judgeships, with a tenth announced for July 1. Only two have nominees. One, in Pennsylvania, went 17 months from vacancy announcement to initial nomination. The other went only five months—a vacancy on the Court of Appeals for the Federal Circuit, which has no Senate delegation. If the Senate approves any more circuit nominees, these two (both Hispanics) are the most likely candidates.

The eight nominee-less vacancies are all in states with at least one Republican senator (circuit judgeships are traditionally associated with particular states). Here, for each vacancy, is the state, the Senate delegation (Republican or split), the date when the incumbent announced that he or she would leave active service, and the number of months since that date. 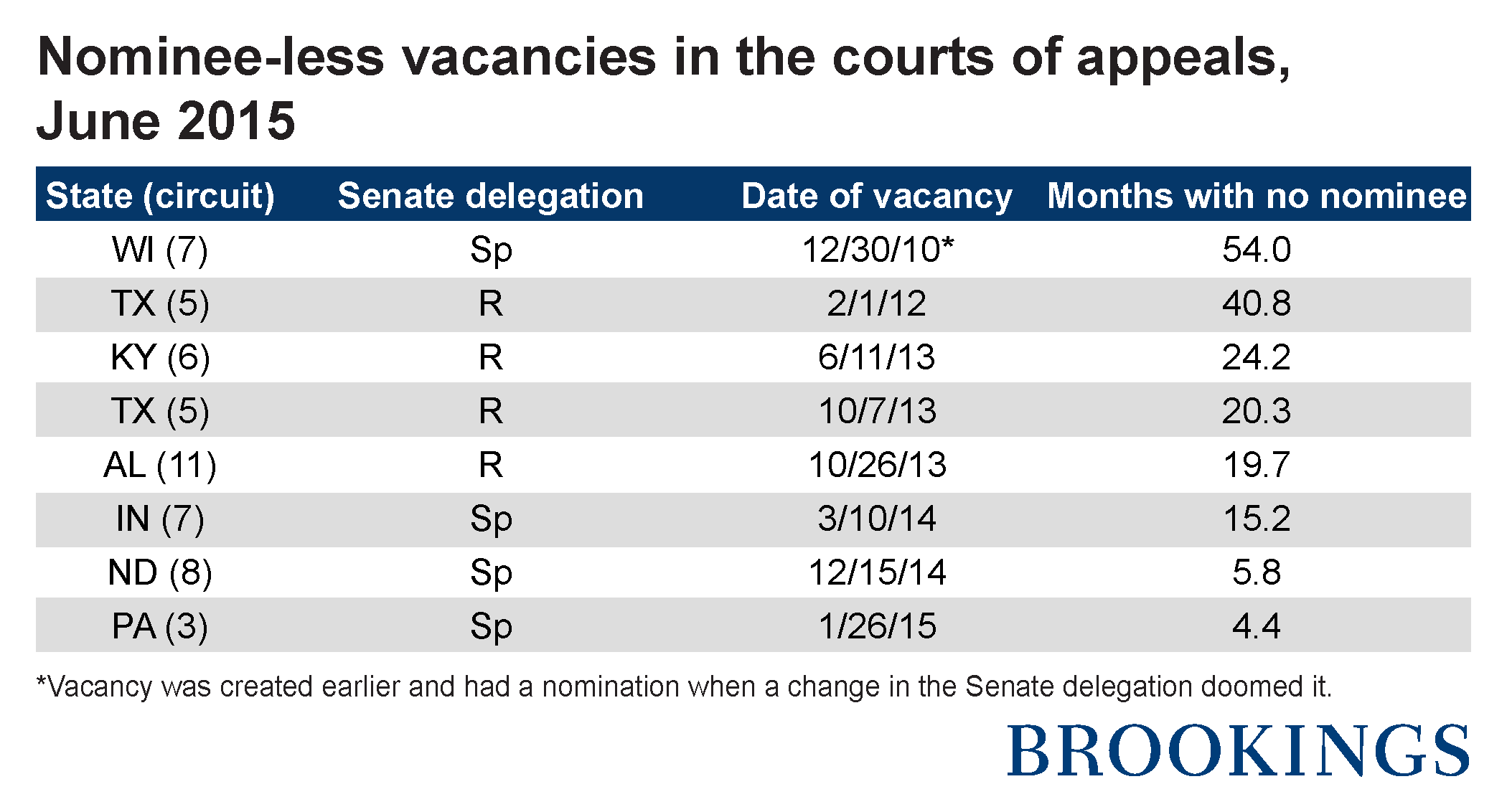 The ages of six vacancies can be measured in years—over four for one, over three for another, two for another, and over one for three others. Glenn Sugameli, who monitors nominations closely, told The Hill that senators in three of the seven states “say they are working” to get nominees in place. But given the age and Senate delegations of these vacancies, one might suspect a unified Republican effort to threaten unreturned blue slips to prevent any—or almost any—nominations from their states in Obama’s final two years

The appearance of White House-senator bargaining (or refusal to bargain) over appellate nominees carries over to the 51 current nominee-less district vacancies, three quarters of which are in states with a Republican senator, with a median age of over three years, versus one year for vacancies in the two-Democratic senator states.

This picture is not new, as I explained in April and December of 2013.

At the mid-point in Bush’s seventh year, of the 20 nominee-less district vacancies, 14 were in states with at least one Democratic senator, although the two sets of vacancies’ median ages were similar (8.8 months for the Republican-delegation states and 6.3 for the others). Eleven circuit vacancies had no nominees, and although they were divided almost evenly between vacancies in two-Republican senator states (five) and those with split or Democratic delegations, the median age of the latter was 16.2 months versus 6.3 for the other.

Bush at this point had seven circuit nominees before the Senate. He submitted 23 all told. Not all of them had home-state senator approval, which had consequences.

Of these 23 nominees, the Senate confirmed ten. Of six Republican-delegation-state nominees, the Senate approved four, denying hearings to two on ideological grounds. Of 17 from one-, or two-Democratic senator states, it approved six. Six others did not have home state senator approval; three others were nominated late in the 2008 election year, ideological opposition forced one to withdraw, and another was nominated to a seat in dispute since the Clinton administration.

Bush’s immediate predecessors also faced an opposing Senate in their seventh and eighth years but saw more confirmations: Clinton, 15 and Reagan 17. Overall, about 20 percent of their eight year totals came in the final two years (20 of George H.W. Bush’s 42 circuit confirmations came in his third and fourth years.)

In short, polarization affected Bush’s circuit nominations but may have a greater effect on Obama’s, and few think it will get any better for the next president.