In these hyper-polarized times, it is no longer surprising when political partisans disagree vehemently about public policy issues. But in the early weeks of the race for the Democratic and Republican presidential nominations, another dimension of polarization is coming into view: the parties don’t even agree about which issues matter most.

Consider the findings of a recent Bloomberg/Des Moines Register poll exploring the policy stances of Republican and Democratic Iowans who are registered voters and likely to attend their party’s caucuses early next year. “For each of the following issues,” a key question reads, “please tell me whether this is something you want candidates to spend a lot of time talking about or not.” Of the 20 issues on the survey list, seven received an affirmative answer from at least four out of five Republicans. Democrats also endorsed seven issues by this margin.

Here are the responses by party: 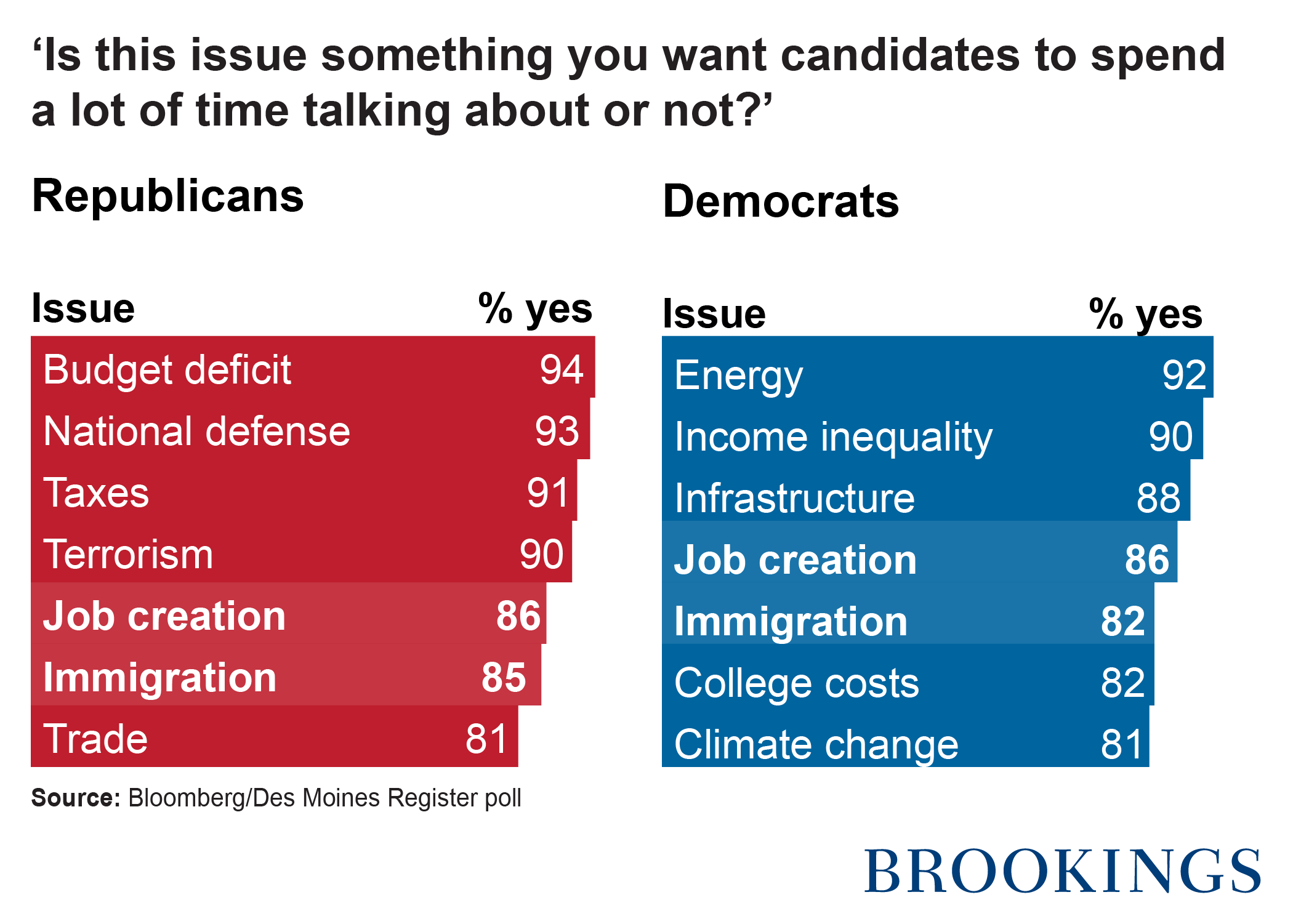 Only two issues appeared on both lists: immigration and job creation. Recent history suggests that these issues will be subject to the classic dynamic of polarization when the Democratic and Republican presidential nominees square off in 2016, with the candidates advocating radically different approaches. Each candidate is likely to use his or her party’s other five top issues more as vehicles for mobilizing core supporters than as focal points of debate with the other candidate.

At this early stage of the presidential contest, we have no way of knowing whether the election will be close enough for genuinely undecided voters to tip the balance. (There is good reason to believe that their share of the electorate will be smaller in 2016 than was typically the case a generation ago.) But if the margin in the closing weeks of the campaign is narrow, swing voters will have to decide not only what they think about contested issues, but also which party’s top policy concerns more closely mirror their own.

A CNN/ORC national survey released today (June 3) largely tracks the Iowa findings, although the poll question—name the single most important issue—and the list—8 items rather than 20—differs significantly from Bloomberg/DMR.

Compared to Republicans, Democrats are significantly more likely to name education, energy/environment, and health care as top concerns and significantly less likely to select terrorism, the conflicts in Iraq and Syria, immigration, and the budget deficit.

CNN/ORC provides ideological as well as partisan breakdowns. These probably offer more insight into primary voters, who tend to be more liberal than Democrats generally and more conservative than typical Republicans. By 16 percentage points, liberals are more likely than conservatives to choose education as their top issue; the margin for energy and the environment is 10 points. By smaller margins of 5 to 6 points, they are less likely to select terrorism,

Because conservatives are more dominant in the Republican Party than are liberals in the Democratic Party, the differences between liberals and Democrats as a whole are more pronounced than between conservatives and Republicans generally. Indeed, CNN/ORC data show, liberals are significantly more likely to care about education than are Democrats as a whole, and significantly less likely to choose health care as their top concern. This reflects, in part, the fact that young adults tend to be more liberal than are older cohorts and therefore constitute a greater share of liberals than the raw numbers would suggest. Young adults tend to care more about education and less about health care than do middle-aged and elderly Americans.  By contrast, there are no significant differences between Republicans as a whole and conservatives.