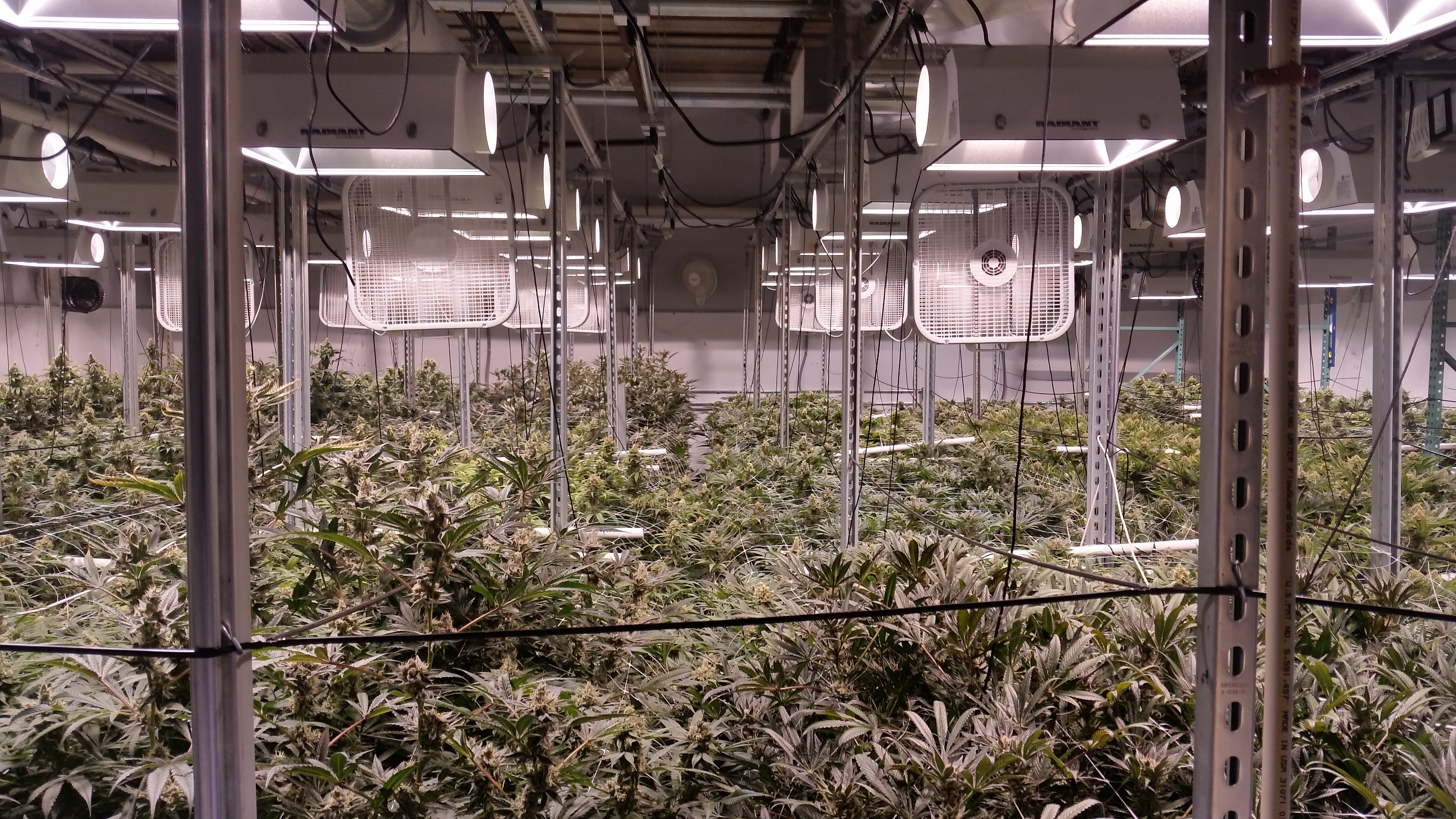 I visited one such producer, Advanced Grow Labs (AGL) in West Haven, CT. Ironically located up the street from the city’s police department, AGL is quite unassuming, but the impact of state marijuana regulations were readily apparent. In fact, the regulations were obvious prior to my visit. Because I am not an employee of AGL, the company needed prior approval from the Department of Consumer Protection (DCP) in order for me to visit.

The company’s sign is small—the state regulates the size of the sign for dispensaries and the production facility sign fits those parameters. Security—a topic the state prefers the details of which not be discussed in detail—was substantial including security staff, buzz and keycard systems, and blanket video surveillance—all to keep safe a type of facility and product which raises fears of external and internal theft.

Once inside—save a dull scent of cultivating marijuana—the company looked like any other business: a conference room, offices for senior staff, cubicles for junior staff. While largely unremarkable, that is a story rarely told about the cannabis enterprises—just how normal they look and function. With the exception of the facility holding substantial amounts of a product that is illegal under the Controlled Substances Act, it looks like any other business.

I first met with David Lipton, managing partner of AGL. He’s a businessman as mainstream as the look of his office space. He’s not a lifelong marijuana advocate. He was not drawn to the business by some ideological force. He saw a business opportunity and pursued it.

One of the few individuals in the state of Connecticut who is legally allowed to grow marijuana, his original success comes from owning outpatient surgical facilities—some of which offer abortion services. Lipton is certainly no stranger to regulation or controversial public policy.

From the start, I was curious to hear an owner’s perspective of running a business in one of the most tightly regulated product markets in the United States. To my surprise, Lipton was bullish about the system. He freely admitted that it took time, expertise and patience to get acquainted with all the rules and regulations that would govern his new enterprise, but noted “it’s a great program and a great model.” He went on to add that he “believe(s) in a highly regulated environment” for the medical marijuana market and that everyone participating “needs to have their A-game.”

Business owners often lament the burden—and added costs—that government regulation puts upon their enterprises, and Lipton was not shy to admit regulation slowed processes and added costs. However, he echoed an appreciation that the rules sought to advance legitimate goals. Those goals include limiting diversion and underage consumption, increasing product quality and safety, and protecting patients.

The conversation covered substantial ground around the topic of the interaction of regulation and business—normally a dry topic but one central to an enterprise’s success or failure. Two topics struck me with particular interest.

Lipton discussed the startup costs for a grow facility. Under state laws and regulations, a company must deposit $2 million dollars in an escrow account in order to qualify for consideration as an operation. An enterprise must pay steep application and licensure fees. They include a non-refundable $25,000 application fee, and if approved, an additional $75,000 fee. Lipton described the escrow account and other provisions as a “safeguard,” but also noted it creates barriers for “mom and pop businesses” to enter the market.

In reality, those barriers to entry are profound, limiting the market to well-financed operations. Lipton went on to note those costs were incurred entirely separately from a business’ standard startup costs—construction, personnel, supplies, utilities, etc. It makes opening a marijuana enterprise in Connecticut a cost-intensive effort, requiring substantial capital and typically relying on teams of investors to buy in (unless they have “M.D.” after their name, as physicians are barred from having financial interest in a marijuana enterprise).

It should be noted, for anyone reading this post, if you’ve organized a few million dollars and are ready to put skin in the medical marijuana game in Connecticut, think again. The state has set caps on the number of growers and dispensaries in the state, and those current caps have been met and are holding firm. Thus, a small community of businesses—four grow operations and six dispensaries—serve a relatively small consumer market—3,635 registered patients.


In order for AGL—or any marijuana producer in Connecticut—to bring new or original products to market (make them available to dispensaries), they endure a rigorous, costly, and time-consuming pre-clearance process. Lipton explained this process with regard to new strains of flower, extracts/oils, edibles or any other new product they produce. Before it can be sold, a certified, external testing company must visit the producer, take random samples of the product and subsequently test it for chemical composition and concentration (THC and CBD levels) and for pollutants, toxins, or other contaminants. Once that testing takes place and if the product meets the necessary standards, the lab issues a certificate of analysis. The company then transmits that certificate of analysis, a proposed label, a description of the product, photographs of the product and its packaging, and other necessary administrative materials to the Department of Consumer Protection (DCP). DCP can deny, approve, or require changes. The latter often leading to a back and forth process between the state and the firm. Final approval is required prior to transfer to a marijuana dispensary for sale.

The process provides the state, the producer, and the consumer relevant information about the product and assists in dosing. However, such a process draws into stark contrast competing pressures in the regulatory system around medical marijuana.

There are clear benefits to such a rigorous process in terms of product quality, product safety, consumer knowledge, and labeling accuracy. The pre-clearance for products helps prevent errors, rather than relying on a regulatory system that simply responds to errors.

Yet, there are costs to this type of system. Lipton explained that there are financial costs for lab testing and personnel time devoted to such compliance efforts, and such costs are naturally passed along to the consumer at the point of sale. In addition, fixed costs for such regulatory pre-clearance can encourage production of larger batches of product, rather than small-batch production. Small-batch production has increasing appeal in an industry working to distinguish products in a competitive marketplace. Finally, because only new products are subject to this process (the production of existing, tested, and approved products do not), such pre-clearance can stifle entrepreneurial innovation by incentivizing firms to rely on pre-approved products in lieu of new development. Regardless, the state and marijuana enterprises weigh such costs and benefits each day, as Connecticut medical marijuana market gets off the ground.

The discussion of regulatory compliance was an interesting one, but my experience with regulations did not end there. Soon, my tour of the grow facility began. Before it did, however, a costume change was required. Like on any research endeavor, I arrived at the facility in business apparel, but wearing those clothes on the tour violated state regulations. Soon I was in pocket-less hospital scrubs, rubber shoes, and a hairnet. The lack of pockets prevents diversion; the rubber shoes avoid slippage; the hairnet was required because I would enter the commercial kitchen in which edibles were produced (more on Connecticut’s edibles will come in a post tomorrow).

Video cameras littered the facility to ensure that every cubic inch of space was captured on film. Every room in which marijuana product was kept had a clearly marked sign and required an employee to use a keycard to access. As a visitor, I could not be left alone in the space.

As I was introduced to AGL’s staffers—many of who were young and seemingly eager employees (a team Lipton praised even behind closed doors)—those who handled product wore gloves. If they shook my hand, the gloves were replaced, as many of the spaces were as sterile and maintained as clinical settings. Entering a grow room, an employee who was tending the plants explained in detail the state ban on pesticides and other chemicals in grow rooms.

As the tour proceeded, it seemed every aspect of the business was regulated—some major and some minor. I asked frequently about different aspects of business practice, and almost every time the justification or explanation for that practice was compliance. Having read the authorizing legislation and subsequent DCP regulations, I knew that Connecticut’s medical marijuana regulatory apparatus was substantial, but it is not until you experience it in person that you understand its breadth.

That is not to critique this system. Many of the problems other states have experienced in areas like product quality, diversion, potency, dosing, and edibles have not yet cropped up in Connecticut. While the system is quite young, one would expect front-end problems to be more likely than problems arising in a mature system. Much of that may be due to the regulatory decisions—however pervasive—that the DCP has made. In fact, the very pervasive nature of the regulatory system may be its strength.

For perspective, I asked Lipton if he traveled to other states to see what their practices were like and if much could be learned—particularly for someone who asserted having no prior knowledge on marijuana cultivation. He said that he traveled and observed what he called “western models” and that he knew his business had to be dramatically different because such practices “wouldn’t pass muster in Connecticut under (its) regulations.”

From the outside looking in, it takes quite a bit to pass muster in Connecticut, but four marijuana producers and six dispensaries do so on a daily basis. I would argue it is an open, long-term question whether the Connecticut system can displace the illegal market and drive patients to use legal means to access marijuana. However, in the mean time, Connecticut’s marijuana producers operate under an immensely structured set of rules and regulations, and they’re still able to do what’s fundamentally necessary for an indoor marijuana grow operation: keep the lights on.