There are fifty-one members of the new Congress convening this week that bear watching.  They’ve been called the “Obama Republicans.”  For our purposes, we looked at the Republican House members who won in congressional districts that Obama won in 2012, or Romney won by fewer than five percentage points.  Thirty-three of them were incumbents who won re-election, the remainder won recently.  Some won by substantial margins; others squeaked through.  If history is any guide some portion of them won’t be around in two years when the presidential election brings out a younger, more Democratic presidential vote and others will survive in spite of it.

But for today, the question is—will they make a difference? Will the Obama Republicans prove to be a counter-weight to the Tea Party members of the Republican caucus?  If so where and how might it matter?   The Brookings Primaries Project allowed us to analyze positions of all the 2014 candidates, based on their websites.  The data yields some interesting differences.  For instance, on the perennial issue of gun control, the majority of Republican candidates who won (74%) opposed stricter gun control but only 43% of the Obama Republicans opposed stricter gun control.  This doesn’t necessarily mean that they will vote for stricter gun control measures—the majority of them simply didn’t mention the issue—a smart move when running in a Democratic district. 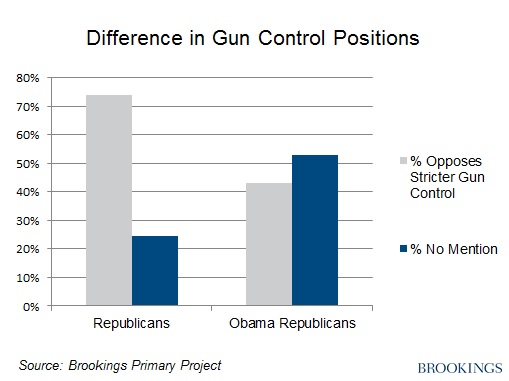 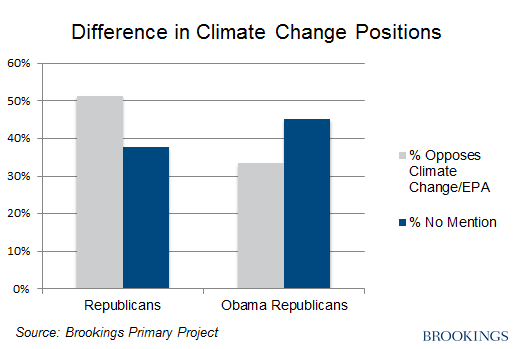 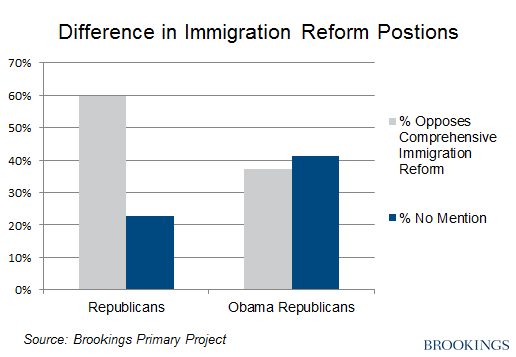 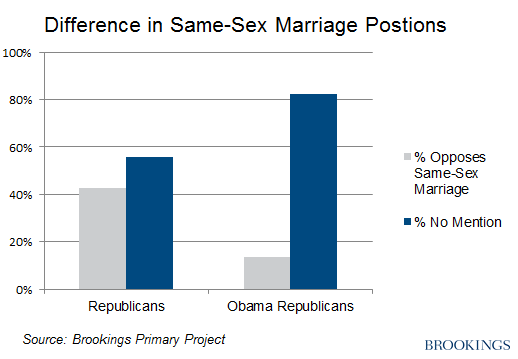 On taxes and on opposition to Obamacare, however, the differences between the Obama Republicans and the rest of their party are not as stark.

And so, the question is – will the Obama Republicans matter?  In earlier eras bipartisan coalitions on certain issues were often a standard feature of congressional behavior— most famously the long-standing coalition of Southern Democrats and Republicans against civil rights legislation.  For those who hope for an end to legislative gridlock there’s a small chance that Speaker Boehner and Minority Leader Nancy Pelosi could, in fact, strike bipartisan deals—but that will most likely vary by issue.

The primary threat to Republicans who stray too far from the fold is still real.  As we saw in our study of the primaries—in the last four elections House incumbent Republicans were more likely to get challenged than were incumbent Democrats.  And even though not many incumbents lost, incumbent Republicans’ margins of victory have been shrinking.  So on high profile issues, don’t expect too many Obama Republicans to cross over to the Democratic side.

Ironically, the most likely impact of the Obama Republicans might be on those issues where Republicans tend to agree.  On issues like tax reform and regulation of business the Obama Republicans could be just what Boehner needs to create a majority on a compromise with the Democrats while allowing his Tea Party supporters to defect.

A small but significant indication that Boehner may be loosening the grip that the Tea Party has on his caucus was his willingness to boot two Tea Party members from the all-important Rules Committee (Rep. Daniel Webster (R-FL) and Richard Nugent (R-FL)).  If Boehner can liberate himself from the grip that the most extreme members of his caucus have had over him and replace those votes with some Obama Republicans we may see a small, but important, break in the congressional gridlock that has been so destructive.   After the past few years even a partial break in gridlock would be a welcome sign for the country.

We’ve made the Primaries Project database public so you can do your own analysis.
» Download the data.