In recent weeks, President Obama has taken to making direct appeals to young voters in an effort to raise the prospects of Democratic candidates around the country. It’s a strategy that would appear at the outset to hold some promise. Obama’s brand has appeared, at times, to retain Teflon-like qualities among America’s youngest adults. Despite facing fierce economic headwinds as they enter the workforce, millennials have remained Obama’s staunchest supporters throughout his presidency. PRRI’s 2014 American Values Survey finds that a majority (53 percent) of millennials (age 18 to 34) have a favorable view of Obama. Seniors (age 65 and older), on the other hand, display considerable antipathy towards the President with nearly 6-in-10 (57 percent) reporting that they view him unfavorably. 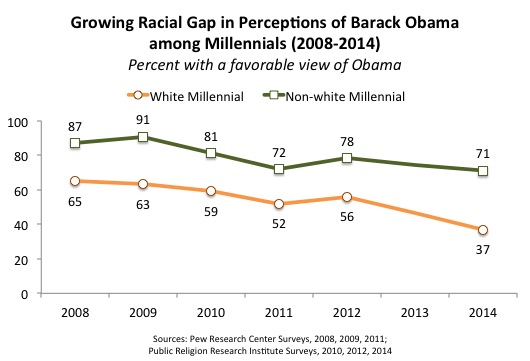 However, the generational affinity that millennials demonstrate towards the president masks a familiar fault-line. Millennial politics, like American politics, remain strongly influenced—if not defined—by race and ethnicity. And sentiments about President Obama are highly polarized by race, even among millennials. More than 7-in-10 (71 percent) non-white millennials, including 86 percent of black millennials and 64 percent of Hispanic millennials, view Obama favorably. Feelings among white non-Hispanic millennials are nearly inverted with only 37 percent viewing the president favorably while 60 percent express an unfavorable opinion.

As a candidate, Barack Obama was incredibly popular among millennials, but even as far back as 2008 perceptions of candidate Obama varied considerably by race and ethnicity. While 65 percent of white millennials viewed Obama favorably during the 2008 campaign, an even greater number of non-white millennials (87 percent) expressed a favorable view of him.

More recently, millennials have become increasingly divided in their perception of Obama. A 22-point favorability gap in 2012 between white and non-white millennials has ballooned into a 34-point gap in 2014. Even before the start of Obama’s second term, there was evidence that he was faltering among young white voters. In 2008, he captured the majority (54 percent) of younger white Americans votes, but fewer than half (44 percent) cast votes for him four years later. Notably, black and Hispanic millennials supported Obama as strongly in 2012 as they did in 2008.

Millennials are an incredibly diverse generation. As such, they are more likely to interact with and display greater tolerance toward minority groups such as atheists, immigrants, Muslims, and gay and lesbian people. They are also more comfortable with the sweeping cultural and demographic changes affecting the U.S., for which they are in no small part responsible. But, despite being dubbed the “Kumbaya generation,” racial and ethnic divisions that define much of American politics and public life persist among millennials.

On the question of whether blacks and other minorities receive treatment equal to whites in the civil justice system, racial gaps among millennials are similarly dwarfed by those among older Americans. Sixty-six percent of non-white millennials and 59 percent of white millennials disagree that blacks and other minorities receive equal treatment in the criminal justice system. Seniors, by contrast, are separated by a chasm on this same question. While nearly two-thirds (66 percent) of non-white seniors do not believe the criminal justice system is colorblind, 55 percent of white seniors do.

A spate of recent events such as the shooting of Michael Brown in Ferguson Mo., and perhaps as tellingly the public response to them, belie any notion that the U.S. is on the cusp of entering a post-racial period. Yet, even as it seems clear that race will continue to play an outsized role in U.S. culture and politics, there are signs that millennials may navigate some of these issues quite differently than previous generations.