After a month long hiatus, the primary season resumes again tomorrow with primaries in four states: Kansas, Washington State, Michigan, and Missouri. Also this week, Tennessee holds its primary Thursday and Hawaii on Saturday.  So far the Tea Party has had a lack-luster season — though it’s not for want of trying.  As the following graph indicates, among challengers in House races, candidates identified with the Tea Party are as numerous as the more traditional “business” Republicans and “conservative” Republicans. 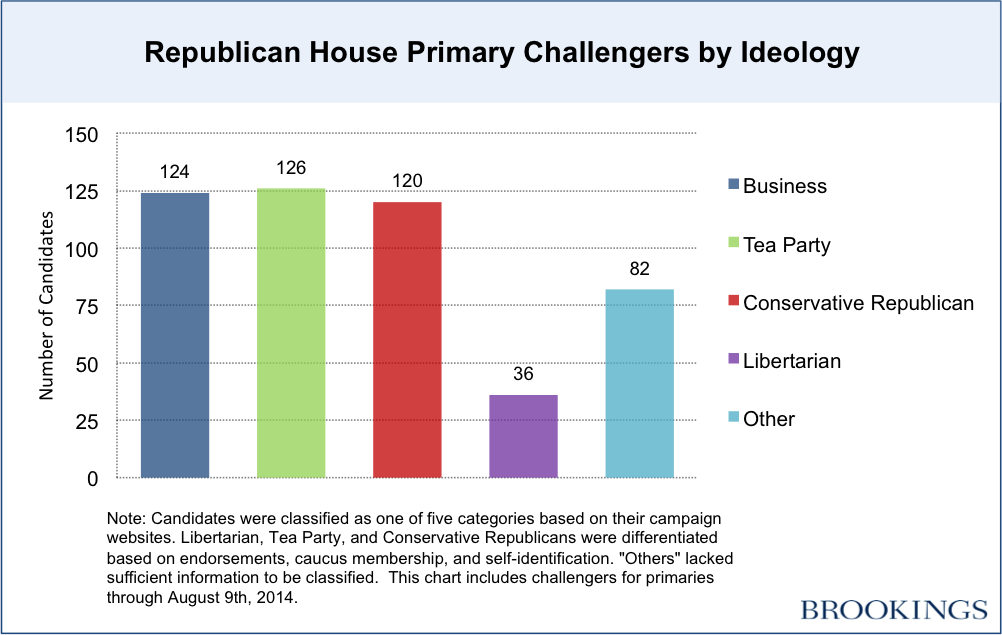 The picture is somewhat different for the House primaries coming up this week – where “conservatives” outnumber all other factions within the GOP. 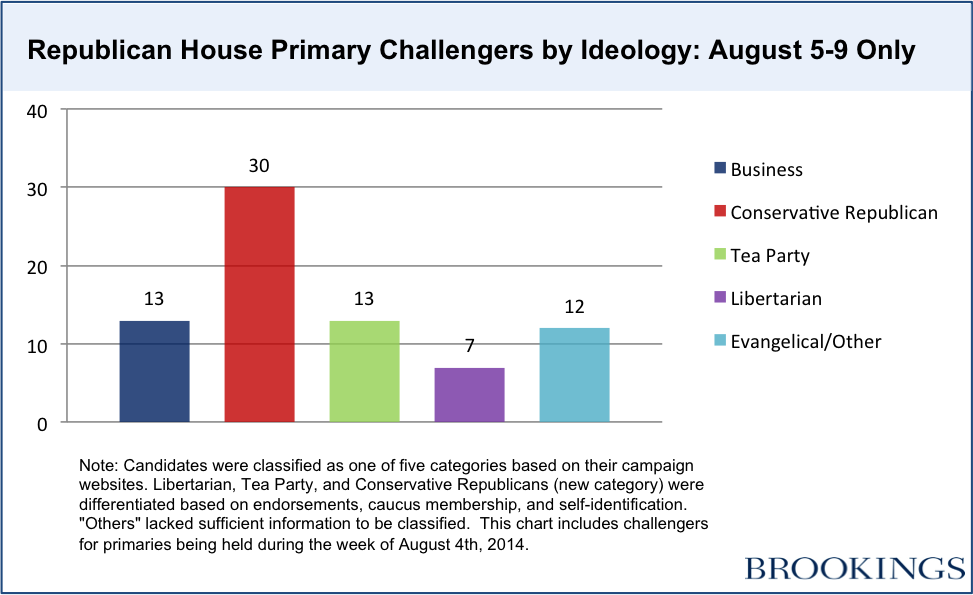 This week the Tea Party has an opportunity to stop its losing streak in Tennessee and Kansas where they have mounted strong challenges to incumbent Senators and where the incumbent Senators are trying hard to prove their conservative bona fides. The Tennessee Republican Senate Primary featuring incumbent Lamar Alexander versus State Representative Joe Carr wound up this weekend with Carr attacking Alexander on immigration reform and pushing his signature theme – his fight against amnesty for undocumented immigrants.

In Kansas, Tea Party challenger Milton Wolf, a controversial Kansas radiologist, is challenging long time Senator Pat Roberts.  Should Roberts lose however, the ideological implications of the race might be a bit muddled given that Roberts, age 78, doesn’t have a home in the state and is vulnerable to the charge that he has lost touch.  And in Michigan the primary will feature a wide-ranging challenge for control of Republicans in the state legislature.

In Washington State we’ll see the second “top-two” primary of the season (after California) – where the top two finishers, regardless of political party, will proceed to the general election.  In the absence of a state-wide primary, the election is expected to be a fairly low key event except that students of primaries and advocates for primary reform will be watching to see if any incumbents draw strong challengers in November and if two Republicans move on to the one open House seat in the state.

And in Hawaii tomorrow, the Democratic Senate Primary is proving to be in line with most of the other 2014 Democratic races.  Unlike the Republicans, Democrats in 2014 are not fighting big ideological battles.  Instead, the Democratic contests have tended to be fought along personal lines.  In Hawaii a high profile primary pits Congresswoman Colleen Hanabusa, the hand-picked successor to the late and revered Senator Daniel Inouye, against the incumbent Brian Schatz who was appointed by the Governor to fill the late Senator Inouye’s seat.  Compared to the Republicans, the ideological implications of this race are minimal.

But the true significance of the August primary season may be less in who wins and who loses than in the effect that the internal turmoil in the Republican Party has had on the Republican leadership.  In a major rebuke to their leadership, the House Republicans departed for Washington having failed to pass any legislation that would help deal with the humanitarian crisis of children at the border.  They did manage to pass legislation dealing with the crisis at the Veteran’s Administration – but just barely.  The win-loss ratio of the Tea Party in this season’s primaries is turning out to be a lot less important than the fact that they have been aggressively challenging Republicans at all levels.  If the House of Representatives’ last week at work this summer was any indication, the Tea Party seems to be winning its internal policy battle regardless of what is happening at the polls.