The Tea Party staged an upset for the ages with its defeat of Eric Cantor this week, not only ensuring his departure from Capitol Hill at the end of this Congress but prompting him to resign as House Majority Leader less than 24 hours after losing.

Yet the Cantor contest in Virginia’s 7th congressional district in suburban Richmond, along with a few other high-profile showdowns like the Mississippi Senate race headed for a runoff between Senate institution Thad Cochran and Tea Party pot-stirrer Chris McDaniel, are the exceptions rather than the rule so far this year. 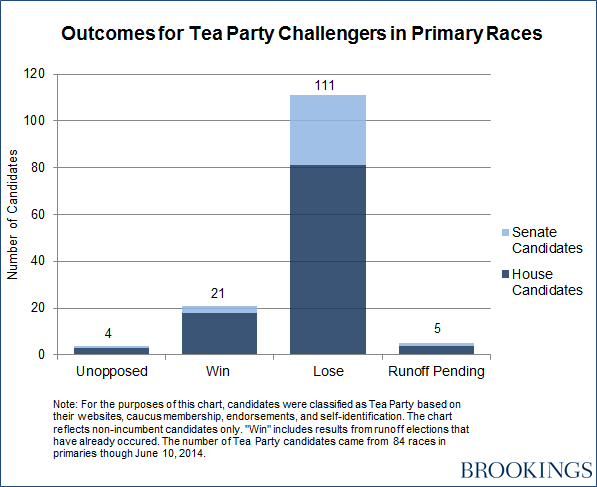 Our team at the Brookings Primaries Project has identified the ideology of every House and Senate candidate running in 2014, allowing us to compile a win-loss record through June 10. In primaries and runoffs without incumbents, 16 Tea Party House candidates have won the GOP nomination in their districts—and 81 have lost. Four Tea Party Senate primary candidates have won, including the unopposed Tom Cotton in Arkansas, and 30 have lost.

Many of these losing candidates have been endorsed, and occasionally supported with money or organizing, by clusters of national groups including the Tea Party Express, Tea Party Patriots, FreedomWorks, the Madison Project, the Senate Conservatives Fund, Concerned Women for America, and Young Americans for Liberty. Media figures such as Ann Coulter, Laura Ingraham and Erick Erickson have also gotten involved.

In Virginia’s 7th, giant-killer Dave Brat had some conservative media champions, but the Randolph-Macon College economics professor crushed Cantor without the blessings of national groups.  Another Tea Party figure in the winners’ circle this week was Bruce Poliquin. A Maine real estate developer and former state treasurer who had previously run for governor and senator, he was endorsed in this race by FreedomWorks and Utah Sen. Mike Lee.

The huge June 3 round of House primaries was more representative of what’s been happening this season. Tea Party candidates lost all over the country.

In Alabama’s overwhelmingly Republican 6th district, surgeon Chad Mathis was endorsed by at least five national organizations along with Erickson and Lee, yet failed to make the cut for a July 15 runoff. In Iowa’s open, evenly split 3rd district in the Des Moines area, secretary of state Matt Schultz—endorsed by the Tea Party Express, FreedomWorks, the Senate Conservatives Fund and Rick Santorum—finished third.

Also on many endorsement lists and coming in third: State Senator Matt Rosendale in the race for Montana’s at-large seat, and Igor Birman, a Russian immigrant and former Capitol Hill aide who took a hard line on immigration and had a half-dozen national groups, plus Mike Lee, Rand Paul and Ron Paul in his corner, but who did not make the fall ballot in California’s 7th district.

The most prominent Tea Party loser on June 3 was New Jersey’s Steve Lonegan, a former mayor and former state director of Americans for Prosperity, who had previously lost 2005 and 2009 runs for the GOP nomination for governor, a 1998 House race and last year’s special Senate election against Democrat Cory Booker. He was endorsed this year by Sarah Palin, the Tea Party Express and an anti-reform immigration group—but lost big to moderate businessman Tom MacArthur in the environmentally sensitive district.

The question hanging over the rest of the primary season is whether Brat’s spectacular win will be the wind beneath some Tea Party wings in upcoming races. One date to watch is June 24, when Cochran and McDaniel face off in Mississippi and when the Brat wave could help carry former Oklahoma state House speaker T.W. Shannon—endorsed by Mike Lee, Ted Cruz, Sarah Palin, FreedomWorks and the Senate Conservatives Fund—to a Senate nomination victory over Rep. James Lankford. Another key date is July 22, when Georgia will hold three House runoffs between Tea Party candidates and more traditional politicians:

Our Brookings data back up the narrative of the Republican primary season to date, which is that for the most part, the GOP establishment has summoned the strength and will to overcome the Tea Party. But the historic first-ever ouster of a House majority leader in a primary has changed the psychology of the 2014 midterms. Keep an eye on the remaining primaries and runoffs to see if it will also change the pattern of results.

Editor’s note: This post originally failed to include four losing Tea Party candidates. The chart and text were updated on June 13 to reflect the change.