Sri Lanka has a reputation for being a trailblazer when it comes to women and human development. At the primary education level, almost all girls and boys are enrolled in school, and in secondary school more girls are enrolled than boys—and have been for several decades. Girls now also outnumber boys in tertiary education. These achievements have a long history, with roots in the colonial period, when the establishment of single-sex missionary schools promoted education for females, though admittedly only among the elite classes. Some writers attribute the spectacular increase in female literacy from 42 percent in 1946 (compared to 70 percent male literacy in the same year) to its present day level (92 percent in 2013, according to the Department of Census and Statistics, 2014) to the widespread educational reforms of the 1940s that extended access to education to the masses, through the state provision of free education in the vernacular language, which they argue eventually led to the acceptance of the educated female as the norm. 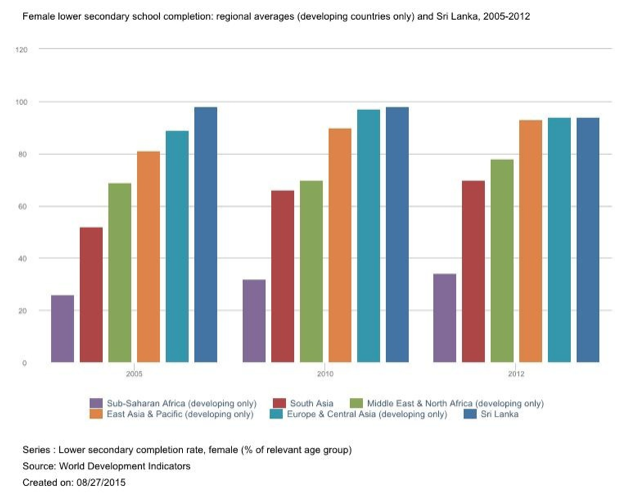 Sri Lanka’s record in girls’ education is matched by its record in women’s health and fertility, and the links between the two are well documented. Life expectancy for women has been higher than that of men since the 1960s, along with a low total fertility rate of 2.4 and low maternal mortality of 29 per 100,000 live births. In the last complete census, conducted in 2012, there were 106 females to every 100 males in the total population of 20,359,439 individuals, reflecting that, unlike its neighbor India, Sri Lanka does not face a problem of “missing women.”

Despite these impressive achievements in girls’ education and women’s health, Sri Lanka does not perform well in the global gender gap index, ranking 79th out of 142 countries in 2014. This low ranking comes from its poor performance in the dimensions of economic participation and political empowerment. Sri Lanka’s female labor force participation rate has remained in the range of 35-40 percent in the last decade, compared to a near-constant male participation rate of 75 percent; and the unemployment rate for females has remained twice as high as the male unemployment rate from the mid-1980s (21 percent for females and 11 percent for males) to the present (6 percent for females and 3 percent for males in 2013 (Department of Census and Statistics 2014). 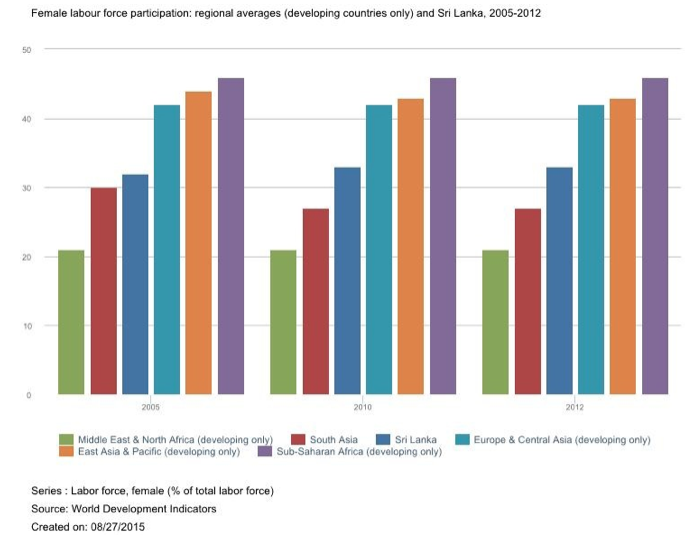 Why has Sri Lanka failed to translate its education (and health) achievements into female economic participation? This is a question that has drawn the attention of policymakers in recent times, especially because Sri Lanka faces critical labor shortages in several sectors. An anecdote about Sri Lankan women in the garment industry illustrates their value: “When you have Sri Lankan [women] workers they can read a label and sew it the right way up on a garment, whereas workers overseas need to be trained to recognize how to align a label on a garment.”

The results of these studies are compelling and lead to further questions. Why do females with secondary schooling opt out of the labor force? Why does unemployment among females remain high? Does poor schooling quality and lack of employer-demanded skills pose more of a problem for females than males seeking jobs? To what extent do cultural norms constrain girls’ labor market choices? Do girls in war-affected parts of the country face different constraints than their counterparts in the rest of the country?

These are some of the questions that I hope to address in my research as an Echidna Global Scholar, using new information and data that have become available since previous studies that include information on skills and training and have greater geographical coverage, especially of ethnic communities in post-conflict zones that had not been surveyed for decades.  As many studies have shown, the costs of low female workforce participation to women, their families, their communities, and their countries are too great to be ignored.

Professor of Economics - University of Peradeniya