This International Women’s Day, Arab leaders across the Middle East and North Africa (MENA), along with their partners in the international community, must reassert the right to education for every child—especially for girls.

Current efforts fall short for far too many girls and young women. More targeted initiatives, funding, research, and advocacy for education for girls and women in MENA should be among the top priorities of the Beijing +20 meeting next week and MENA’s post-2015 development goals.

Educating girls and women is one of the best investments Arab states can make in their social and economic well-being.

A girl who goes to school is less likely to marry early and more likely to delay childbirth and have healthier children. In Arab states,  a one-year increase in maternal education is associated with a 23 percent decrease in the number of children under the age of five dying from pneumonia—the largest killer of children under 5 years.

As more countries in the Arab world are embroiled in conflict, it is also important to consider the role that educating and empowering women can play in establishing peace and security.

Yet, despite the benefits, Arab countries have one of the highest gender inequality rates in the world, second only to sub-Saharan Africa. A review of education data from 2000 to 2012 provides some insights.

A number of countries have recognized the importance of equal access to education for boys and girls, achieving or nearing gender parity at the primary school level. 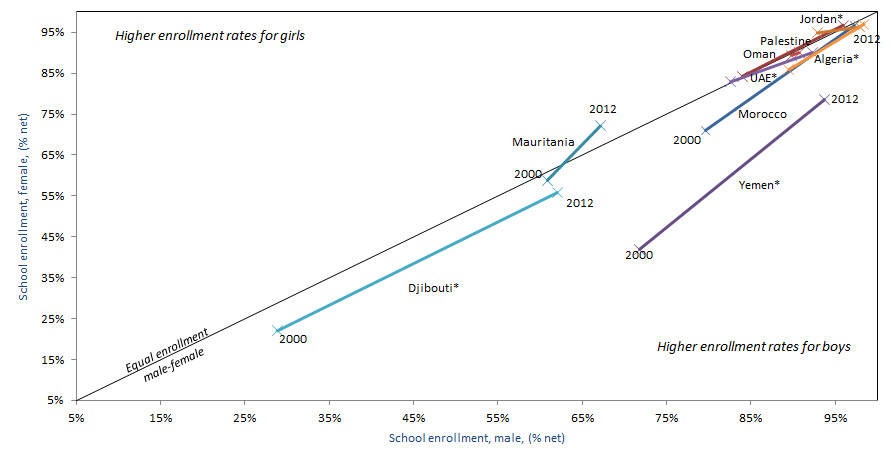 Algeria and Morocco in particular have made significant progress since 2000. Both countries have almost achieved gender equality at the primary level (with a GPI of 0.98 and 0.99, respectively). 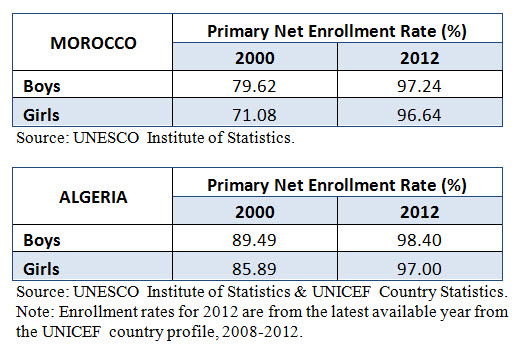 Yemen, Djibouti, and to a lesser extent Mauritania continue to face the greatest challenges in providing girls with primary education, despite progress since 2000. Yemen remains one of the three countries globally with the lowest gender parity in education, along with the Democratic Republic of Congo and Afghanistan. 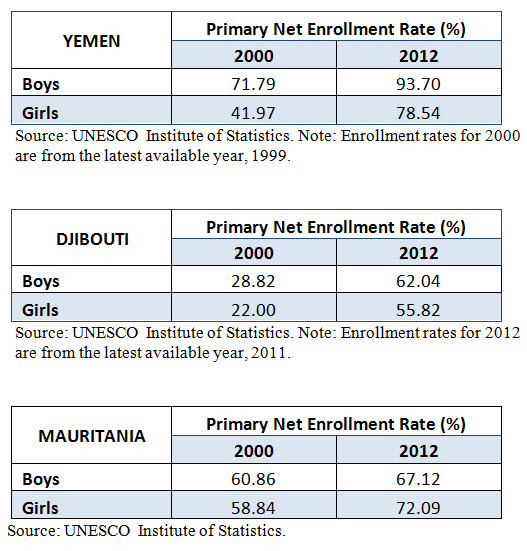 However, while there are overall higher rates of enrollment of boys than girls at the primary level, the trend is reversed at the secondary level. On the whole, girls are accessing secondary education at higher rates than boys. While girls’ education should be a priority, high boys’ drop-out rates in many Arab states should not be ignored. 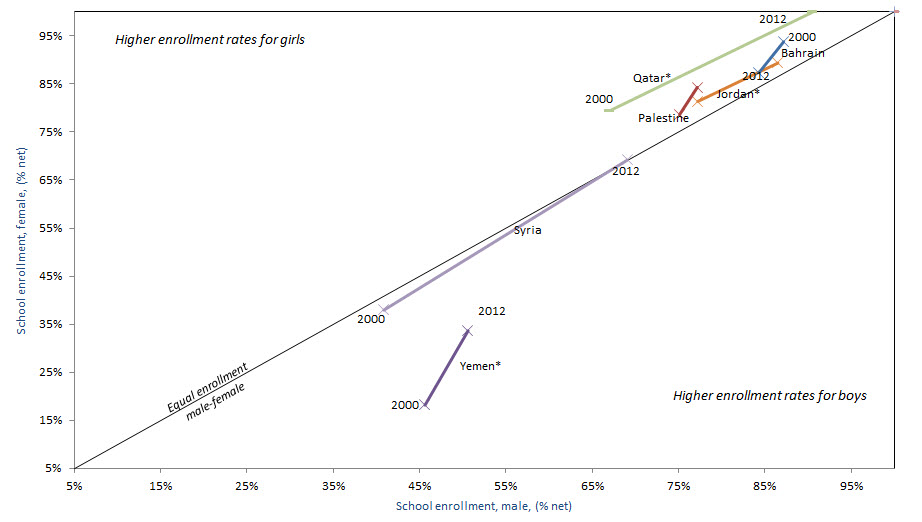 A concerted effort is needed to accelerate progress in MENA countries that will miss the 2015 target of equal access to education for all girls. These efforts must aim to reach girls living in poor rural communities as well as those living in conflict.

As illustrated in the findings of the Arab World Learning Barometer, gender disparities are aggravated by wealth and location differences. In Yemen, less than 1 percent of wealthy, urban males suffer from extreme education poverty, compared with 86 percent of poor, rural females.

Families living in poverty in rural areas in countries like Egypt and Yemen often choose to send their sons to school rather than their daughters, because they cannot afford the direct costs (e.g., tuition fees) or opportunity costs (e.g., lost family revenue) of sending their girls to school. Girls’ education is also still widely seen as providing lower rates of return on investment, because they are less likely to use their education to earn an income.

Deeply entrenched gender barriers such as domestic roles and early marriage, compounded by fears over lack of safety and suitability of schools for girls, continue to be among the greatest challenges to increasing access to education for girls in rural areas.

Efforts to extend access to education to girls in the region must also contend with the effects of conflict, which has had a devastating impact on both genders. The MENA region has the highest number of out-of-school children due to conflict.

Prior to war in Iraq and Syria, both countries were making strides in education as leaders in the MENA region. However, war has drastically affected children and especially girls. In Iraq in 2010, girls accounted for only 44 percent of students and almost 75 percent of them dropped out in primary school. In Syria, and as refugees in neighboring countries, girls face rampant harassment and violence, coupled with financial pressure on their families as a result of war. This means that instead of going to school many girls enter into early marriages.

Without equal access to education, women’s empowerment both politically and economically cannot be secured. Girls’ education prepares young women for work and to participate in their communities and nations. As both regional and global leaders meet to discuss women’s rights and empowerment, strategies to increase access to quality education, especially for the most vulnerable girls, should be central to the conversation.