Legislators in many U.S. states have been voicing the need to shield children from complexity, controversy, and differing perspectives. Since the beginning of 2022, politicians have introduced 139 bills across 37 states designed to limit educators’ latitude to address racism, inequity, bias, structural injustices, and gender and sexuality issues in school. Thus far, 20 states have enacted related laws or executive orders. Many of these efforts stymie civic learning and discussion of controversial issues, and limit experiential learning about how to engage as local civic actors.

With our colleagues at the University of Southern California Dornsife Center for Economic and Social Research and USC Rossier School of Education, we wanted to know whether these efforts reflect the American public’s views of what children should learn in school or reflect the will of a loud minority. Between August 15 and September 12, 2022, we administered our Understanding America Study survey to a nationally representative sample of 3,751 adults. We asked about the topics that children should learn about in elementary and high school.

We found that Americans across the political spectrum believe that high school students should be learning a broad range of 24 civics-related concepts and skills we asked about in our survey—far broader than the loud voices and limiting legislation would make it seem. Here, we summarize and discuss findings from our recent report. Details related to our methodology, questionnaires, toplines, and crosstabs are available here.

Bipartisan support for instilling critical thinking skills and teaching high school students about many, but not all, controversial topics 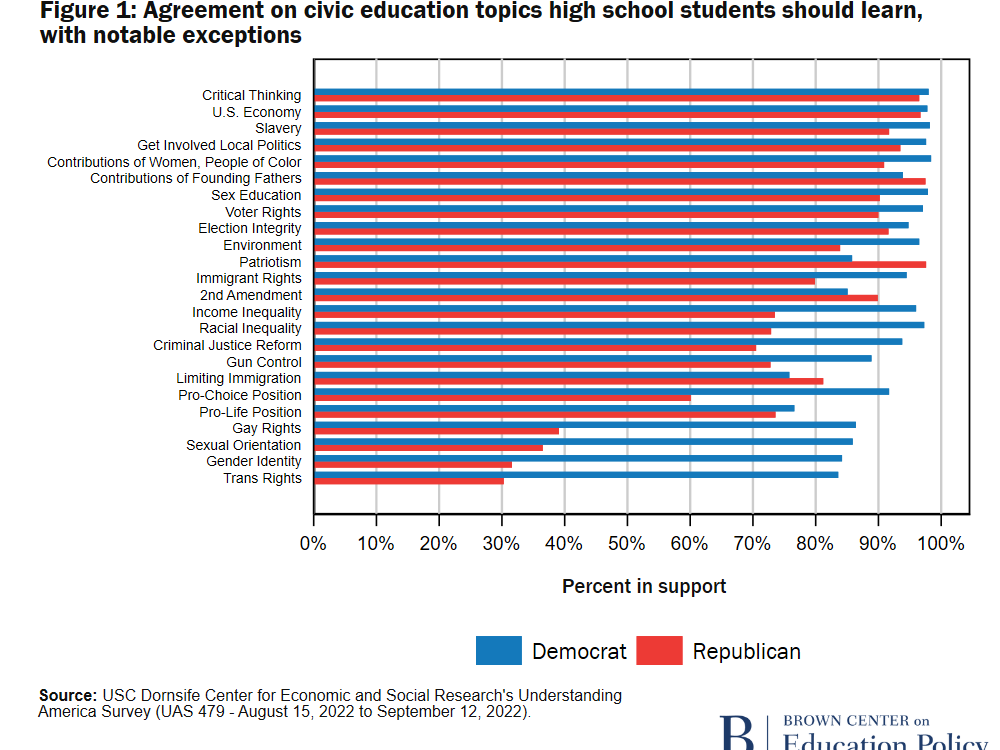 Teaching controversial issues when democracy is under attack

The complex and dynamic legal landscape of LGBTQ student rights

In fact, at least 59% of adults support teaching high school students about each of the 24 topics we asked about, and most topics receive far higher levels of support. The idea that overwhelming partisan division encompasses all aspects of civic learning is wrong.

However, there are exceptions to the broad bipartisan agreement, especially in the teaching of Lesbian, Gay, Bisexual, Trans, and Queer/Questioning (LGBTQ) issues. The vast majority (84-86%) of Democrats supported teaching high school students about gay rights, sexual orientation, gender identity, and trans rights—across four separate survey items—but less than half (30-39%) of Republicans agreed. Respondents who do not identify as Democrats or Republicans (e.g., independents, Green Party, Libertarian) fell in between, with 59-66% support.

In general, more Democrats than Republicans support students learning a perspective not traditionally held by their party (e.g., with higher proportions of Democrats wanting students to learn about the Second Amendment and anti-abortion views than Republicans wanting students to learn about gun control and pro-life views). However, a clear majority of adults feel high school students should be learning differing perspectives.

Americans feel some topics are not age-appropriate for younger children

We also asked for Americans’ views on when these controversial topics should be covered in school, to contrast attitudes about exposure in high school versus elementary school. At the elementary level (Figure 3 below), respondents were more skeptical of teaching many civic topics. Fewer than 50% of adults support teaching younger children about 14 of the 24 controversial topic items we asked about. 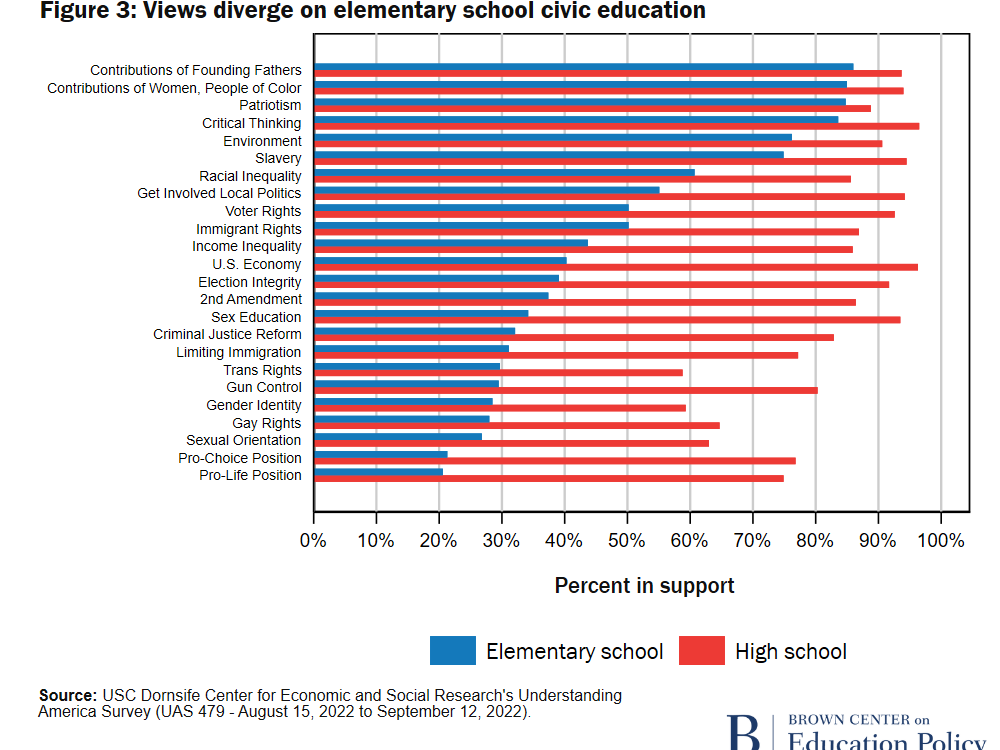 For example, Americans generally support teaching elementary students how to think critically (84%) and become involved in government/politics (55%), as well as about the contributions of the Founding Fathers (86%) and women and people of color (85%), patriotism (85%), the environment (76%), slavery (75%), and racial inequality (61%). They are more split in their attitudes about covering immigrant (50%) and voter rights (50%) in elementary grades. Most Americans do not think young students should learn about income inequality (44%), sex education (34%), or LGBTQ issues (27-30%).

As in the case of high school, Democrats are far more likely to favor teaching elementary school students about LGBTQ issues and sex education (expressing support often at 4-5 times the levels of Republicans; see Figure 11 in the full report for more details). But in none of these cases does Democratic support reach even 50%. Adults seem to want the elementary curriculum to stay away from difficult and complicated controversial topics, particularly those addressing sex and sexuality. These views suggest adults feel some civics topics are not age-appropriate for younger children.

At a high level, these results indicate that the American public wants students to be exposed to robust civic learning opportunities throughout K-12 education. They want students to engage with controversial issues, learn multiple sides of issues, and learn critical thinking skills. They also want students to learn how to get involved in government and politics. Their responses do not express general concern that civics education addressing most controversial topics will be politically skewed. Instead, they recognize that the most important way to raise a new generation of responsible citizens is to give them the opportunities to learn and practice these skills from a young age. At the same time, adults are split along partisan lines in their support for high school children learning about LGBTQ issues in school, with bipartisan caution about addressing these topics with elementary school children at all.

Digging further into some of the issues we asked about could uncover less overall support and more partisanship than these results suggest. For example, while strong majorities of Democrats and Republicans feel students should learn about the contributions of the Founding Fathers, there may be disagreement over approaches to what to teach about this topic. Perhaps more Democrats than Republicans feel that children need to know that the Founding Fathers supported and profited from the institution of slavery. Future surveys could dig deeper into these types of questions.

Though there will be disagreements about how to teach controversial topics, outright bans like those considered and required through current legislation seem misaligned with the public’s desires. We need good civic education to preserve and strengthen democracy, and the American people recognize this.