If you think the skills of American teachers don’t stack up to those of teachers in other countries, you’re wrong—American teachers are perfectly mediocre. Well, in fairness, American teachers seem to be a touch above average in literacy skills and noticeably below average in numeracy. They shine in neither area. “Mediocre” means middling. I guess some country has to be in the middle, but that’s not how we Americans like to picture ourselves. For me, American teachers being middle-of-the-pack isn’t good enough. I expect—at least if you’re an American reader of Chalkboard—that you too want the U.S. to be a world leader in education.

Before we turn to the evidence, a few caveats are in order. Obviously many teachers have extraordinary cognitive ability. The data we’ll talk about looks at averages. And there are two “limits” on the data. First, teachers certainly need noncognitive and emotional skills as well as cognitive abilities, and we’ll only be talking about the cognitive side. Second, the data I’ll show you use measures of the kind of problem-solving skills we’d expect of a high school graduate. The questions asked are not about college-level work. “Limits” notwithstanding, the findings are shocking.

Today’s pictures all come from a paper that Rick Hanushek was nice enough to send me. Hanushek and coauthors Marc Piopiunik and Simon Wiederhold used data from the Programme for the International Assessment of Adult Competencies, which administered cognitive ability tests to 160,000 adults across 24 countries. The tests focused on real-world problems that someone who had completed high school (or the local equivalent) would be expected to be able to solve. The authors identified university graduates in the sample and then pulled out the data points for all the teachers. This allowed them to compare data for teachers to other university graduates within a country.

The first question is “How do the literacy and numeracy skills of American teachers compared to other American college graduates stack up to the skill of teachers in other countries compared to college graduates in those other countries?” Hanushek and coauthors offer a striking picture, following up on a chart originally done by Andreas Schleicher. 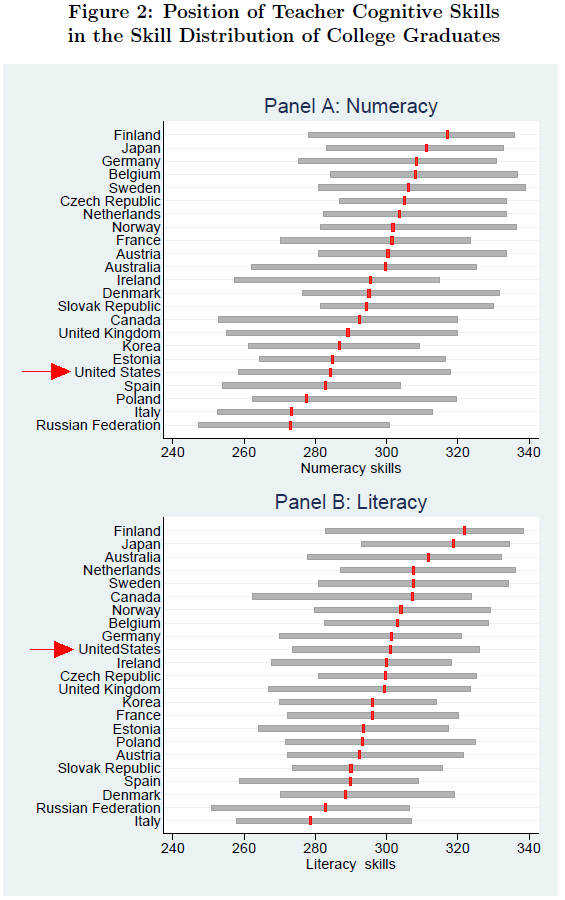 Here is possibly the most surprising result of the research: despite the average skill level, American teachers are underpaid relative to the skills they have. Hanushek and coauthors estimated the differential in pay within each country controlling for experience, gender, and—importantly—for cognitive skills. They write

“The estimates…indicate that teachers are paid some 20 percent less than a comparable college graduate elsewhere in the U.S. economy after adjusting for observable characteristics.”

You could argue that as public employees, American teachers do get good benefits in terms of pensions and health insurance when compared to other workers. And that is probably more true in the U.S. than it is in other countries, especially where health care is provided to everyone. However, the value of these extra benefits is likely small compared to the compensation gap. Remember that the relevant comparison is to other professional workers. According to the Bureau of Labor Statistics, 95 percent of teachers are offered retirement benefits. So, however, are 85 percent of management, business, and financial workers. The BLS reports similarly that 97 percent of teachers have access to medical benefits, but that’s compared to 94 percent in the management, business, and financial worker category. In fairness, teacher pensions for long-time teachers have historically been very generous. To some extent that has changed recently. Moreover, pension benefits for the many teachers who teach only for part of their career are much less generous. Chad Alderman and Andrew Rotherham have estimated that about half of teachers will receive no pension at all. In other words, while there is some truth to the notion that teachers get higher than average benefits, the reality of extraordinary teacher benefits is often exaggerated.

Nonetheless, the combination of slightly better health and retirement benefits means that 20 percent American teacher underpayment number likely is somewhat exaggerated in comparison to other countries. It’s possible that international comparisons fail to fully capture the other ways we compensate our teachers in the form of extra benefits to government employees.

But it’s not like the U.S. number is close to what happens elsewhere. Here’s the picture. 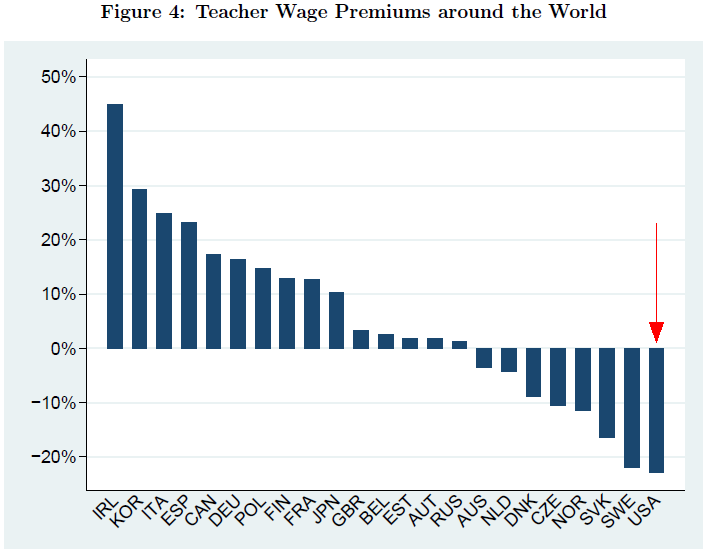 American teachers don’t have the great basic skills we’d like them to have, not compared to the rest of the world they don’t. But, we way underpay them for the skills they do have. Both ought to get fixed.