Do professional development programs for teachers actually develop better teachers? Should the large amount of money spent on teacher development be re-directed to better uses? “The Mirage: Confronting the Hard Truth About Our Quest for Teacher Development,” released this summer by TNTP (aka “The New Teacher Project”), raises serious questions about whether the entire teacher development enterprise should be abandoned.

“The Mirage” raises three issues based on an in-depth exploration of teacher development programs in three large, public school districts and one charter management organization. The report begins by looking for evidence on whether professional development works; i.e., Do teachers become better as a consequence? The second question examined is whether teachers think development works. Then finally, and perhaps most surprisingly, “The Mirage” looks at the dollars spent on professional development and finds that the costs are shockingly high.

Does professional development for teachers work?

Since the districts studied engage in large-scale teacher development programs, one might expect the result to be that teachers to improve over time. Using overall evaluation scores according to each district’s own metric, the study finds no evidence that teachers improve. It’s worth pointing out this is not the first study to come to this conclusion.[1] To state these a little more carefully, teachers typically improve substantially for their first few years in the classroom, with a flat trajectory thereafter—despite spending time in development activities. You can see what happens in this figure taken from The Mirage. 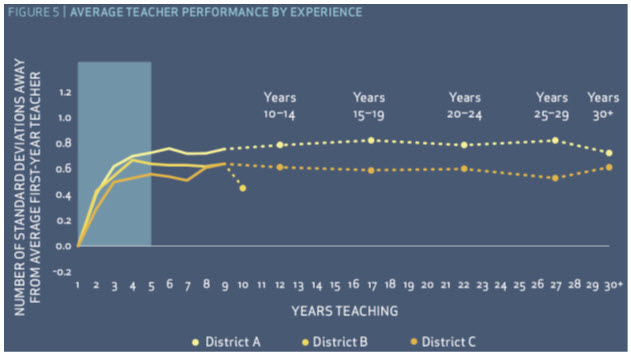 In order to drill down into the data, the authors of “The Mirage” labelled teachers as “improvers” or “non-improvers.” They ran the classifications a number of different ways, but always relying on each district’s teacher evaluation metric . Notably, the authors did not rely on value-added scores alone.

While overall performance is flat, might we be seeing a mix between improving teachers who received a lot of development support and non-improvers who didn’t? Apparently not. Improvers and non-improvers look pretty much the same when it comes to teacher development. “The Mirage” compared the frequency of a variety of development activities for improving teachers and others. Teachers who didn’t improve spent pretty much the same time being developed as those who did improve.

As the saying goes, absence of correlation does not prove absence of causation. Maybe teachers need ongoing training just to keep from getting worse, although I’m not aware that anyone has made such an argument.

How much money is spent on teacher development?

You may—or may not—be surprised at evidence that teacher development basically doesn’t work. What I think you will be shocked by, as I was, is how much is actually spent on teacher development. The headline number from The Mirage is that the three districts they studied spend on average $18,000 a year per teacher on professional development. To give context to $18,000 a year, average teacher salaries are around $56,000. In other words, the cost of development is just a bit under a third of the cost of salaries. That is a very large amount of money. It is an especially large amount of money to spend absent clear evidence of results. It is a disturbingly large amount of money to spend in light of evidence that there are no results, according to “The Mirage.”

Where is all this money going? “The Mirage” does not break down the totals, but does give considerable background on what went into the calculations. The authors provide “low,” “middle,” and “high” cost estimates. The $18,000 headline number is the middle figure; the low end is $13,000 and the high end is $20,000.[2] As an example of the difference, the salary bump that comes with a master’s degree is included in the middle and high figures, but not in the low estimate. Paying for a higher degree is certainly a real cost, although perhaps not the first thing that comes to mind when one thinks of a district’s support of “professional development.” But getting a master’s degree does share something with the rest of findings in “The Mirage”—we know that it doesn’t improve teaching.

Teachers spend time equivalent to almost 10 percent of the school year in professional development. Of this time, five to 10 school days each year are devoted to mandated development activities; the remainder is spent on self-initiated activities. So a non-trivial part of the cost of professional development is simply salaries and benefits for teacher time. But the larger fraction is paying for the time and resources of everyone else engaged in development. In fact, “The Mirage” compares the cost of staff training in schools (excluding the part that goes to teacher salaries and salary bumps) to the costs in other large organizations and reports that schools spend four to 15 times more than non-school organizations on staff training. One might speculate as to whether the high levels of spending by schools reflect a set of vested interests in the teacher development biz, but so far as I know there isn’t any evidence on why schools spend so much on training.

Professional development seems like an obviously good idea. Indeed, after writing “we found no set of specific development strategies that would result in widespread teacher improvement,” the authors of “The Mirage” argue “that doesn’t mean we should give up.” Well maybe we should give up. Or at least, maybe we should cut way, way back on what we spend on professional development and devote the freed up funds to higher teacher salaries and more hours in which classroom teachers are in class with their students. In my book Profit of Education, I argued that the single most important education “reform” would be to pay teachers more…a lot more; my ballpark figure is 40 percent more. The considerable funds now spent, apparently ineffectively, on improved teacher development would be a good down payment towards improved teacher salaries.

[2] Heather Hill’s “Review of The Mirage: Confronting the Hard Truth About Our Quest for Teacher Development” agrees with “The Mirage’s” finding of considerable investment in teacher development, but argues that the headline number is too high.