This interview is adapted from a segment in the Brookings Cafeteria podcast called “Coffee Break,” where a scholar new to Brookings introduces their background, research interests, and offers book recommendations. The transcript has been slightly edited from the audio recording.

My name is Margaret Taylor. I am a fellow at Brookings and senior editor and counsel at Lawfare.

Q: Where did you grow up? 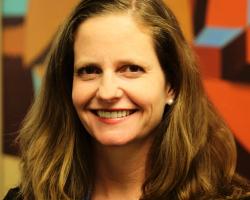 A:  I was born in El Paso, Texas, when my dad was in the Army there. Shortly after I was born, he moved the family to Salisbury, Maryland, which is not far from here in Washington. It’s on the eastern shore of Maryland about 30 minutes from the ocean and 30 minutes from the bay. Quite a rural area.

Q: What inspired you to become a scholar?

A: I’m a lawyer first. I’m a practitioner, so I’ve had about a 15-year career since I graduated from law school as a practicing lawyer working in government lawyer jobs. Ten years as a lawyer at the State Department advising policymakers there and then five and a half years on Capitol Hill advising the Senate Foreign Relations Committee on international legal issues as well as domestic legal issues. In actuality, my first love is as a practitioner and at some point, along the way, I started to have the sense that the best way for me to contribute going forward would be to take those 15-years of practitioning experience and turn them into something that could be understood and used more broadly—in a more scholarly way. I really felt like I had something to contribute from my years as a practitioner, and I thought becoming a scholar would be a good way to do that.

Q: What do you think is the most important issue we’re facing today?

I will give an example. Obviously, Americans have been hearing for several years now about Russia’s interference in the 2016 United States presidential election, and we’ve all been living with that for two years now. And while I still do think that most Americans are appalled by that idea, I think just the fact of living with it for two years—there does start to be a sort of normalization that can set in, and I hope that’s not the case. And I would just say that foreign interference in democratic elections is something that happens all around the world with a lot of frequency. For example, some European elections and European populations sort of expect that as a part of their democratic elections. Not a welcome part, but they expect it as an inevitable in their elections. My hope is that Americans don’t get to that place where we just expect this type of thing as a normal part of our democracy, because I think it will corrode our democracy and damage our own notion of ourselves as exceptional in the way our democracy works.

Q: What are you working on?

A: Right now, I am working on trying to do some research and writing on high-profile congressional investigations, as a way of preparing myself for the next two years. We are expecting some pretty high-profile hearings in the House of Representatives, which is now controlled by the Democrats. I really found myself wanting to go back and do a little bit of historical research on past high-profile investigations. A couple of days ago I watched the Army-McCarthy Hearings, which were quite fascinating. I’m in the process of re-watching the Clinton Benghazi Hearings and I’m also going to watch the Iran-Contra Hearings as well as the Watergate Hearings. And my thought and my goal is, as we’re watching these high-profile hearings over the next two years, to be able to put them in some sort of a context in comparison with these prior high-profile congressional hearings in the United States.

I don’t quite know where it’s going yet, but I do feel like this is an important piece of what’s going on right now in politics.

Q: If you could recommend any book to our listeners what would it be?

A: If I could recommend any book to our listeners, I would have to say Atlas Shrugged. And I say that not because I think it’s a particularly fabulous book that has great ideas to guide one’s life. I happen to not think that, but I do think that sometimes you’ve got to read books to be able to identify bad ideas and avoid them. And I say this because we do have leaders in our political life who love this book and are guided by it. I happen to think it is kind of a mess of a philosophy encapsulated in a mess of a bizarre novel, but I do think that educated citizens in America have a responsibility to understand this book because there are people who are guided by it. And I should say—in its favor—it’s a highly entertaining and enjoyable read. I mean, the story is sort of absurd, and it has this science fiction element to it, but it is quite a compelling book and is enjoyable to read. So, I recommend the book, and people won’t have a bad time reading it. It is fun to read. It’s sort of intellectual trash—I guess that’s how I would sum it up.