Despite failed attempts by Senate Republicans to vote on a resolution to reject the Iran nuclear deal, the debate among members of the U.S. Congress continues.

Recent polling suggests Americans, for their part, are equally divided on the agreement designed to curb Iran’s nuclear program in exchange for relief from crippling economic sanctions.

While the deal looks nearly certain to survive, the implications of the public record on this debate will affect the conversation around the region for decades to come.

Last week, Brookings contributed to that effort by hosting a Brookings Debate on the Iran deal. The specific question at hand: How should congress vote on the Iran nuclear deal?

CBS’s Major Garrett moderated the debate, asking viewers to vote for or against the deal before the debaters made their case. At the end of the debate, viewers voted again. Here were the results: 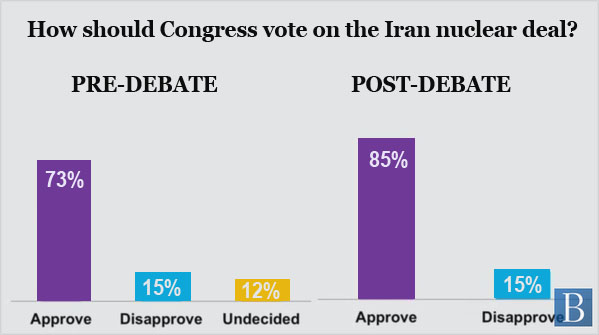 After watching the highlights, what do you think? Should Congress approve the deal? Leave your thoughts in the comments.

You can watch the full debate video here.