The Panama Canal first opened 100 years ago today on August 15, 1914 with the passage of the American steamship the S.S. Ancon. As we mark the centennial anniversary of the canal’s opening, we take a look back at Brookings’s scholarship on the canal.

In the 44th Service Monograph of the United States Government, published in 1927 by the Institute for Government Research (which later became the Brookings Institution), Darrell Hevenor Smith provided a thorough review of the Panama Canal’s history, activities, and organization. 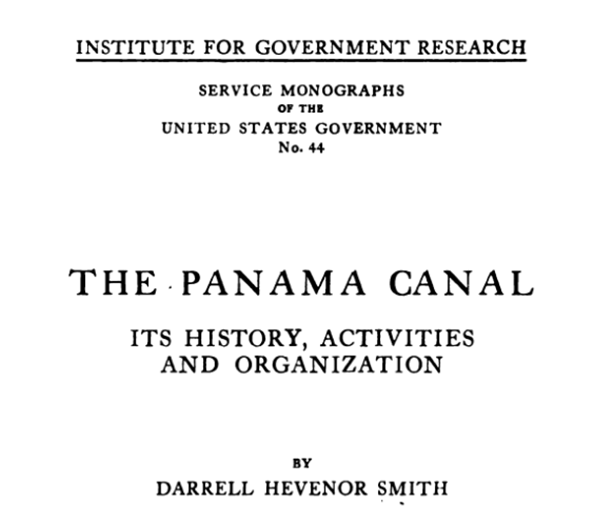 In the nearly 400 page report, Smith detailed the history beginning from the Ottoman Era, the activities and function of the canal, and the organizational structure that supported the canal’s operations. He explained that:

Smith methodologically traced the canal’s history from the Panama Canal Act, the Permanent Plan, its opening and operations during the First World War, through its operations until the publication’s date in 1927. 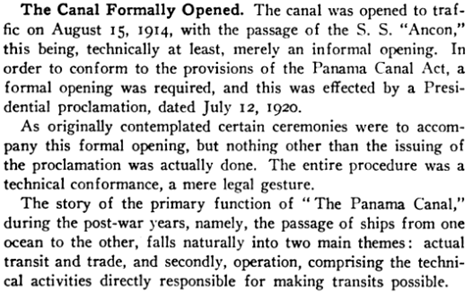 For decades following its opening, Smith explained that “’The Panama Canal’ [was] an independent establishment of the United States government, responsible solely to the President of the United States, but reporting, pursuant to his order, the Secretary of War, who thus [exercised] supervision over the operations of ‘The Canal.’” In 1977, U.S. President Jimmy Carter signed the Panama Canal Treaty which would grant Panama full control of the canal beginning in December of 1999, mandating its neutrality in order to guarantee all ships the right to its use.

Since then, the canal has continued to be of service by connecting “U.S. Atlantic and Gulf ports to their trading partners in Asia, Oceania, and South America,” moving “over 330 million tons of freight each year.”  Discussing the ongoing work to widen the Panama Canal and its trade implications, Brookings experts Adie Tomer and Joseph Kane suggest that “an expanded canal promises bigger ships, bigger cargo loads.” They explain that:

The canal suffers from capacity constraints. The world’s largest ships can no longer fit through certain locks, meaning the canal was ill-prepared for its second century. In response, Panama initiated a major overhaul including two new locks, plus widening and deepening several existing channels. When complete in 2015, larger container ships will expand potential trade volumes between the Americas and Asia–and more seamlessly connect global markets in the process. The promise of these larger ships is the inspiration behind the Atlantic ports’ major capital projects.

Richard Feinberg senior fellow in the Latin America Initiative at Brookings also wrote about the recent discussions over a competing canal in Nicaragua, financed by the Chinese government.

Click here or scroll down to view Smith’s full monograph.