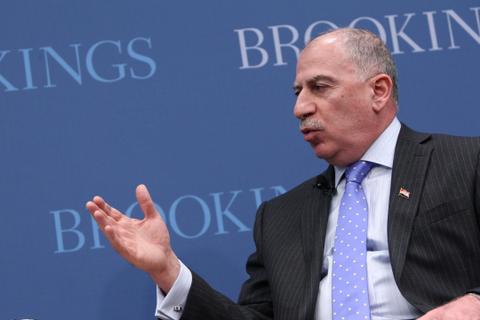 “I don’t call for any interference in Iraq. And I reject it even it’s the United States,” said Usama al-Nujayfi, the speaker of Iraq’s Council of Representatives, in an event hosted by the Saban Center for Middle East Policy at Brookings. “But friends,” he said, “should provide advice and support.” Mr. al-Nujayfi was at Brookings for a discussion to help Americans understand the travails of Iraq and the perspective of Iraq’s Sunni community in particular. He discussed the current crisis of Iraq and the role that the United States might play in helping to avoid a further descent into all-out civil war.

During the conversation, moderated by Senior Fellow Kenneth Pollack, the Speaker said (via an interpreter):

So of course, I do not call for any interference in Iraq. And I reject it even it’s the United States. But friends, also, should provide advice and support. And should play a role in order to bring the parties closer together. They should support their friends when they are in trouble.

We need weapons, we need a political stand, we need an economic support. And the United states needs Iraq to be a stable country, to be secure, to be able to produce energy, to be democratic. All these are American and Iraqi interests alike.

Mr. al-Nujayfi also addressed Iraq’s constitution, lack of citizens’ confidence in the political process and state institutions, and the resurgence of al Qaeda in Iraq. When asked by Pollack to help Americans understand the “puzzle” of al Qaeda coming back into cities like Fallujah and Ramadi, where U.S. and Iraqi forces had battled and defeated insurgents, Mr. al-Nujayfi explained:

But after the battle ended, the promises made to those people were not kept. And the government dealt with them as if they were opponents and enemies. They were not allowed to join the armed forces. And this was based on weird standards. As if they did not want to have military units from these provinces. They were mistreated. And this led to frustration and mistrust. People became convinced that they should not deal with Baghdad because … their representative in the government and the parliament are not able to get them their rights back, or to move their legitimate demands forward. And they saw that the government was trying to marginalize some Iraqis and not giving them the role they were elected to play.

So at a psychological level, there was a lot of [distrust] and lots of frustration and this allowed al Qaeda to come back. Because when the people do not trust the army and see al Qaeda, they are confused. If they [do not] fight al Qaeda they believe the situation will go back to what it was before 2006. If they fight al Qaeda they will be a target afterwards. If they do nothing, they will be caught between the fire of the army and the fire of al Qaeda. Because they know that al Qaeda will be bringing a worse kind of repression back.

But the psychological situation at this point makes it easier for al Qaeda to come back.

“So we need to win the population back in these provinces,” he said. “We need to give those people their rights to support them at the political, economic, and security levels. And then al Qaeda will be defeated within days.”

Get the full event audio.

On March 17, Vanda Felbab-Brown joins the Asia Scotland Institute for a discussion on “Blood, Metal and Dust: How Victory Turned into Defeat in Afghanistan & Iraq.”

What’s the significance of Biden’s first military strikes in Syria?