This post is the third of three based on my Mundell-Fleming lecture, which discussed the international effects of Fed policy (see here for a video of the lecture and here for a paper that expands on the lecture’s themes). In the two previous posts (see here and here), I addressed a pair of criticisms of recent U.S. monetary policy: (1) that the U.S. had engaged in “currency wars” by depreciating the dollar for competitive advantage in trade; and (2) that shifts in U.S. monetary policy have had spillover effects on financial stability in other countries, especially emerging markets.

These debates raise yet another question: Why is the Fed the principal subject of such critiques, even though other major central banks have also engaged in aggressive monetary policies? A common answer is that the dominant role of the U.S. dollar in international trade and finance—about 60 percent of international reserves are held in dollar-denominated assets, for example—makes Fed actions particularly consequential. That in turn, it is sometimes argued, confers a special responsibility on U.S. policymakers to take the international implications of their actions into account.

Why is the dollar the most often-used global currency? Does the dollar’s international role unfairly advantage the United States, to the detriment of other countries? Does the dollar’s role magnify the effects of Fed actions on other countries, and if so, how? I’ll touch on these questions in this post. I’ll argue that the benefits of the dollar’s status to the United States have been much reduced in recent decades, and that a principal channel of the Fed’s international influence works through dollarized credit markets.

The dollar’s international role has evolved since World War II. During the early postwar period, under a 1944 agreement negotiated by the U.S. and its allies at Bretton Woods, New Hampshire, other currencies were pegged to the dollar while the dollar was (loosely) pegged to gold (see here for a discussion of how the Bretton Woods framework related to other international monetary systems). The goal was to replace the gold standard, which had collapsed during the Depression, with something more flexible. In practice, however, the system afforded the greatest flexibility to the United States, which enjoyed substantial freedom to pursue its domestic policy objectives as well as the ability to run sustained balance-of-payments deficits. The latter, according to French finance minister Valéry Giscard d’Estaing, gave the United States an “exorbitant privilege.” The Bretton Woods system ultimately broke down in part because the U.S., as the “anchor” country, didn’t live up to its obligation to maintain price stability. Since the early 1970’s the international monetary system has been effectively decentralized, with each country setting its own exchange-rate framework and with the values of the major currencies being determined by markets (“floating” rather than fixed exchanged rates).

Bretton Woods was enforced by central banks and other policymakers. In the current decentralized regime, decisions about which currencies to use in trade and finance (other than in official reserve holdings) are made largely by market participants. Why has the dollar retained pre-eminence despite this major shift? The most important reason is certainly inertia. People are accustomed to using the dollar in international transactions, and the willingness of others to take dollars increases their usefulness (economists call this a “network externality”). But in recent decades the dollar has also proved its worth as an international medium of exchange. Among the benefits it provides users are:

On the other side of the ledger, what benefits does the United States derive from issuing the currency that is most used internationally? Some of the benefits are symbolic, a sort of “good housekeeping seal of approval” for U.S. markets, institutions, and policies. (Actually, the benefits of having an international currency are arguably mostly symbolic; for example, China’s efforts to internationalize the renminbi seem driven in large part by a quest for international recognition.) The tangible benefits to the U.S. of issuing the world’s principal reserve currency—the “exorbitant privilege”—have, I think, been significantly eroded by the greater actual or potential competition from other currencies, such as the euro and the yen, and by America’s shrinking share of the global economy. In particular, the interest rates that the U.S. pays on safe assets, such as government debt, are generally no lower (and are currently higher) than those paid by other creditworthy industrial countries. The point is illustrated by Figure 1, which shows real interest rates paid on the government debt of five countries, as calculated from inflation-indexed bonds. 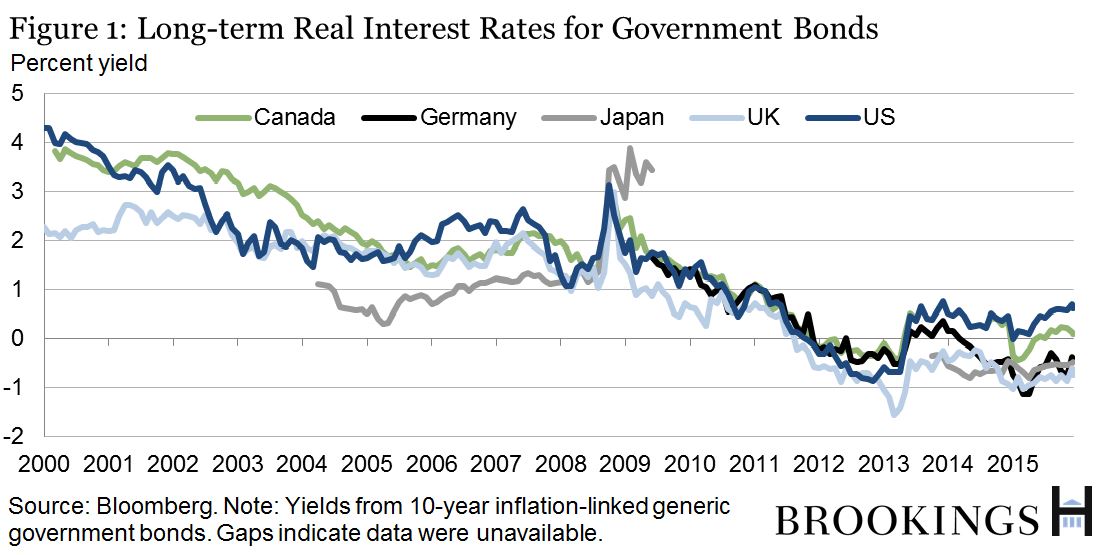 What else? A great deal of U.S. currency is held abroad, which amounts to an interest-free loan to the United States. However, the interest savings are probably on the order of $20 billion a year, a small fraction of a percent of U.S. GDP, and that “seigniorage,” as it is called, would probably still exist even if the dollar lost ground to other currencies in more-formal less informal international transactions. U.S. firms may face slightly less exchange-rate risk in international transactions, but that benefit should not be overstated since the dollar floats against the currencies of most of our largest trading partners. The safe haven aspect of the dollar is actually a negative for U.S. firms, since it implies that they become less competitive (the dollar is stronger) at precisely the times that global economic conditions are most difficult.

Overall, the fact that English is the common language of international business and politics is of considerably more benefit to the United States than is the global role of the dollar. The exorbitant privilege is not so exorbitant any more.

What about the question of how the dollar’s special role affects the transmission of Fed policy abroad? Put another way, what international effects does a monetary policy action by the Fed have that wouldn’t also follow from a similar action by, say, the European Central Bank or the Bank of Japan? Probably the most important differential channel of effect for Fed actions arises from the fact that many borrowers in the emerging world, both banks and corporations, borrow heavily in dollar-denominated terms, even when dealing with non-US lenders. Borrowing in dollars allows emerging-market banks and firms access to larger and more liquid global credit markets while protecting lenders from unexpected fluctuations in local-currency exchange rates. That so much debt is dollarized certainly makes Fed policy more powerful internationally than it would otherwise be.

We need to be careful here though. Despite the fact that much international borrowing is denominated in dollars, it doesn’t follow that the Fed is the “world’s central bank.” Consider an emerging-market firm whose revenues and costs are mostly in the local currency. Even if that firm routinely borrows in a dollarized credit market, the interest rate relevant to the firm’s investment and hiring decisions is the cost of borrowing as measured in terms of the local currency, not the dollar interest rate. So, if the Fed lowers the dollar interest rate, the firm’s relevant cost of borrowing may not fall, or may not fall by as much, as the dollar rate—it depends on what the firm expects about the exchange rate between the dollar and the local currency. If the dollar is expected to appreciate, for example, then “cheaper” dollar borrowing is not necessarily cheaper from the perspective of to the emerging-market firm, because paying back the loan will be more expensive in local-currency terms. In short, Fed easing (that is, lowering the dollar interest rate) does not mean necessarily that borrowers around the world also face easier conditions. Their effective cost of borrowing depends instead on multiple factors, including borrowers’ expectations and the policy responses of foreign central banks.

I suspect that, in practice, Fed policy affects emerging-market borrowers less through the expected cost of borrowing and more through the realized cost, that is, the cost of repaying existing loans. Many (probably most) dollar loans to foreign borrowers are not hedged against risk of changes in currency values. If the Fed tightens, say, and the dollar appreciates sharply and unexpectedly, then what initially appeared to be cheap dollar loans can become very costly after the fact, because they must be repaid in expensive dollars (see here for more). Higher real debt burdens stress the balance sheets of emerging-market borrowers, which may lead them to reduce lending, investing, and hiring. For this reason, the Fed’s tightening may be felt as a tightening in foreign economies as well. Obviously, this effect would not be as strong if less foreign borrowing was denominated in dollars, or if dollar borrowing were better hedged against exchange-rate risks.

With the Fed now beginning to raise interest rates, the risks implied by a stronger dollar for emerging-market borrowers should be carefully monitored. The good news is that the dollar has appreciated considerably in the last eighteen months or so and no major financial problems have apparently resulted. That’s no reason to be complacent, however. If emerging-market banks and corporations come under financial pressure, that could slow emerging-market economies and hurt investments in those countries. More generally, the risks to financial stability of unhedged borrowing provide a basis for emerging-market governments to monitor and possibly constrain access to dollarized credit markets in the future. The most natural place to do this is in the banking system, where regulators should check to make sure that lenders are not over-exposed to the risk of dollar appreciation.

Comments are welcome, but because of the volume, we only post selected comments.