The financial crisis and its immediate aftermath saw close cooperation among the world’s policymakers, especially central bankers.  For example, in October 2008, the Federal Reserve coordinated simultaneous interest-rate cuts with five other major central banks. It also established currency swap arrangements—in which the Fed provided dollars in exchange for foreign currencies—with fourteen foreign central banks, including four from emerging markets.  However, once the crisis had passed and recovery begun, national economic interests began to diverge.  In particular, some foreign policymakers argued that the Fed’s aggressive monetary policies, undertaken to support the U.S. economic recovery, were damaging their own economies.

Two criticisms were prominent, and a third perennial issue also reared its head.  First, several foreign policymakers accused the Fed of engaging in “currency wars”—deliberately weakening the dollar to gain an advantage in trade.  (The phrase is most closely associated with Brazilian finance minister Guido Mantega, who
leveled the charge
when the Fed began a second round of quantitative easing in November 2010.)  A second complaint,
raised prominently
by Reserve Bank of India governor Raghuram Rajan, among others, was that shifts in Fed policy (toward either greater tightness or greater ease) were creating spillovers—sharp swings in capital flows and increased market volatility—that destabilized financial markets in emerging-market countries.  This concern has surfaced again recently, as the Fed has initiated what may prove to be a series of interest-rate increases.

The Fed was certainly not the only major central bank to engage in aggressive monetary policies in recent years, but critics argued that the dominant role of the U.S. dollar in international trade and finance made the Fed’s actions particularly consequential.  That raised the third, long-standing issue, of the broad economic implications of the dollar’s international role.  Does the dollar’s status asymmetrically benefit the United States (that is, does the dollar provide the U.S. an “exorbitant privilege,” as it was labeled by French finance minister Valéry Giscard d’Estaing in 1965)?  Does dollar dominance amplify the international effects of Fed policies, or confer special responsibilities on the U.S. central bank?  I tackled all three critiques in
the Mundell-Fleming lecture
at the International Monetary Fund in November and have just posted an
expanded, written version
.  In this post and two to follow I will discuss each of these issues, starting today with currency wars.

A “currency war” (also known as competitive depreciation or a “beggar-thy-neighbor” policy) occurs when a country eases monetary policy specifically to depreciate its currency, with the ultimate objective of cheapening its exports and gaining unfair competitive advantage in international trade.  (My discussion here applies only to exchange-rate changes linked to monetary policy.  Gaining trade advantage through trade barriers like tariffs or through intervention in foreign exchange markets raises quite different issues.)  When a currency war is prosecuted, exporters in other countries may complain that they are being undercut, and foreign policymakers may object to what looks like a diversion of demand away from their own economies, possibly leading to increased unemployment.

Competitive depreciation
became a contentious issue
during the Great Depression.  During the 1930s, the international gold standard collapsed, but it did so in a staggered way, with countries abandoning the gold standard at different times.  The currencies of countries that left gold relatively early (like Great Britain, in 1931) depreciated relative to the currencies of countries that stuck with gold longer (like France, which left gold in 1936).  The economies of countries that left gold earlier were also seen to recover more quickly from the ravages of the Depression.  Some economists of the period, such as Joan Robinson of the University of Cambridge, argued that the recovering countries were doing so primarily through “beggar-thy-neighbor” policies of undercutting other nations in export markets.
[1]
In modern lingo, they were saying that depreciation was a zero sum game; gains for one country came only at the expense of other countries.

However, over time, the recovery from the Depression became global, even as nations’ export shares and currency values stabilized.  What was not adequately appreciated by Robinson and her contemporaries was that a country’s abandonment of the gold standard did more than affect the value of its currency: It also freed the country to use more expansionary monetary policies, which increased demand and incomes at home.  The increases in total demand, for both domestic and foreign goods, served to promote recovery in output and trade in all countries, ultimately proving far more important than the temporary trade diversions created by changes in exchange rates.  In other words, the monetary easings that followed the collapse of the gold standard amounted to a positive sum game.

The lessons of the Depression should inform today’s discussions of currency wars.  An important failing of some currency war accusations is that they focus on one channel of monetary policy transmission—the effect on the exchange rate—while ignoring others.  An easing of monetary policy does work in part by depreciating the currency, which,
all else equal
, tends to increase the easing country’s exports and reduce its imports.  But all else is not equal, since an easing of monetary policy, by lowering interest rates at home, also stimulates domestic demand, employment, and incomes.  Higher incomes in turn lead to more imports, as consumers and firms buy foreign as well as domestic products.  For example, a weaker dollar might make foreign-made autos more expensive for Americans, which, on its own, tends to reduce U.S. auto imports.  But if easier Fed policy leads to more jobs and higher incomes in the U.S., then Americans will spend more on autos in general, including imported cars.  In short, monetary policy shifts affect net exports through both an exchange-rate channel and an income/demand channel, and these two channels work in opposite directions.

Because monetary policy has countervailing exchange-rate and income effects on foreign exports, the net effect of a monetary easing on foreign trade should be relatively modest.  Indeed, in the case of the United States at least, the evidence is that the two effects largely offset.  For example, according to recent Fed estimates (see
Steve Kamin’s remarks
at the Peterson Institute in November), a Fed easing that lowers ten-year Treasury yields by 0.25 percentage points increases U.S. net exports by 0.15 percent of GDP through the exchange-rate effect,  but also lowers U.S. net exports by almost exactly the same amount through the income effect.

Of course, in general, there is no guarantee that the two effects of monetary policy on trade will exactly offset.  Fortunately, additional protection against the threat of currency wars is enjoyed by countries that maintain flexible exchange rates.  As Milton Friedman taught us long ago in his seminal 1953 essay, “The Case for Flexible Exchange Rates,” if exchange rates are free to adjust, countries can ensure that the overall amount of stimulus being felt by their own economy is appropriate, independent of what other countries are doing.
[2]
Not all countries allow their exchange rates to be market-determined, but that is a policy choice they make.  Fiscal policy (in either the easing country or its trading partners) provides an additional potential tool for offsetting the effects of changes in currency values on output and trade.

Beyond the evidence on the countervailing income and exchange-rate effects of U.S. monetary policy on U.S. trade, there is in fact little support in the data for the claim that the Fed engaged in currency wars during the recent recovery.  In a currency war, the country easing its monetary policy “steals” growth from other countries by weakening its currency and increasing its net exports, that is, exports minus imports.  In Figure 1 below, the bars show annual real GDP growth rates for the U.S. since 2006; the darker portions of the bars show the portion of overall growth accounted for by growth in U.S. net exports. 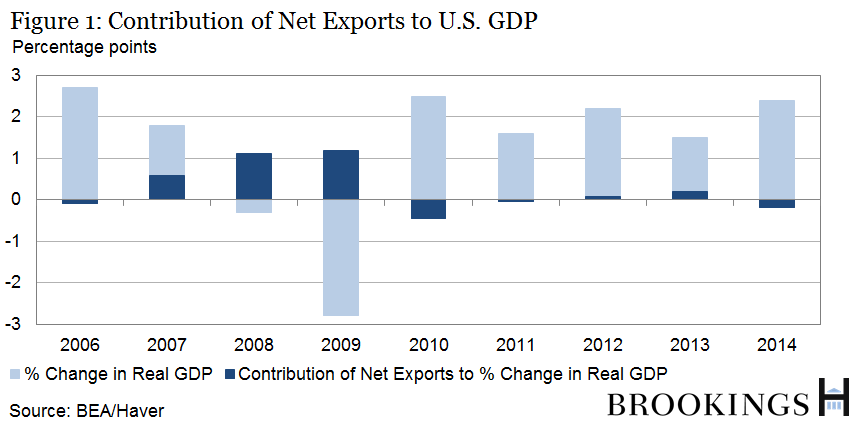 As Figure 1 shows, trade did help buffer the sharp decline in U.S. output in 2008 and 2009, largely because U.S. imports fell even more than U.S. exports as the economy fell into a deep recession.  However, since 2010, net exports account for very little of overall U.S. growth (and declining net exports were actually a negative for U.S. growth in 2010 and 2014.)

Moreover, a currency war requires currency depreciation.  Figure 2 shows three measures of the value of the U.S. dollar:  the overall value, the value measured against major currencies like the euro, pound, and yen, and the value against the currencies of “other important trading partners,” corresponding mostly to emerging-market countries. 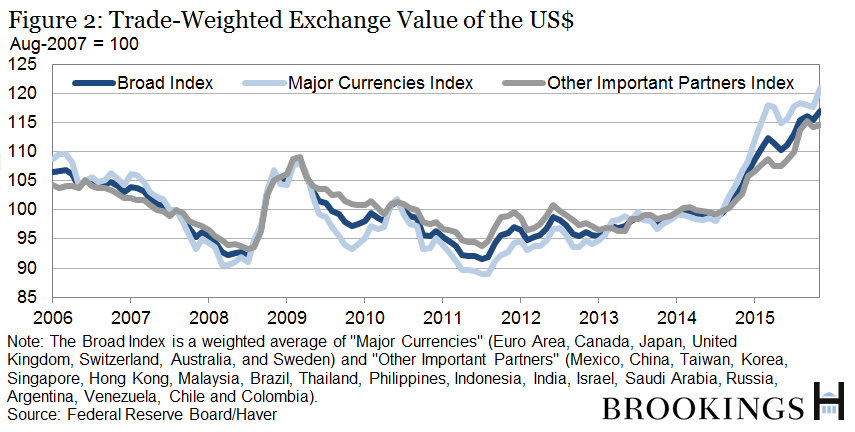 As you can see, the dollar fell somewhat in early 2011, after the beginning of the Fed’s second round of quantitative easing in November 2010 (and about the time that Minister Mantega was lodging his complaint).  But the U.S. currency recovered in the second half of 2011, then climbed gradually until mid-2014, when it began its recent sharp rise.  That pattern is not consistent with a currency war, at least not a successful one.  It’s true that some of the failure of the dollar to decline reflected countervailing easing of monetary policy by U.S. trading partners.  However, that observation only illustrates the point above that countries with flexible exchange rates have the necessary tools to offset the effects of U.S. monetary policy on the dollar.  Indeed, many countries eased monetary policy during this period, in response to a slow global recovery.

If easier Fed policy hasn’t damaged the net exports or growth rates of trading partners, then why have foreign policymakers complained?  One possibility is that, while the exchange-rate effects of monetary policy are immediate and obvious, the effects operating through higher incomes take longer to develop and are harder to discern.  Thus, the adverse effects of Fed easing on foreign exporters via a weaker dollar are more evident (and politically more salient) to the policymakers and the public abroad than are the beneficial effects of a strengthening U.S. economy, which take longer to manifest and are harder to separate from other factors.  Foreign policymakers may also dislike seeing their exchange rate appreciate for reasons unrelated to the current state of their economy—for example, they may want to promote exports in the longer run as a development strategy.

Overall, I find little support for the claims that the Fed has engaged in currency wars.  Although the Fed’s monetary policies of recent years likely put downward pressure on the dollar, the effect of the weaker dollar on U.S. net exports was largely offset by the effects of higher U.S. incomes on Americans’ demand for imported goods and services.  Indeed, recent years have seen neither an increase in U.S. net exports nor any sustained depreciation of the dollar.

[1] For Robinson’s argument in its entirety, see “Beggar-My-Neighbour Remedies for Unemployment” in Part III of Essays in the Theory of Employment, first published in 1937 with a second edition in 1947.

[2] Friedman’s essay is included in Part III of Essays in Positive Economics, available from the University of Chicago Press (1953).