In September, the World Bank released a new report that provides an update on global migration and its role in economic development. The report, Leveraging Economic Migration for Development, highlights the increase in the number of global migrants, rising remittances, and changing attitudes towards migrants. The report focuses on economic or voluntary migrants, who make up almost 90 percent of international migrants.

Mapping global migration (Figure 1), the report finds that more people emigrate from developing countries to other developing countries (South-South) rather than high-income Organization for Economic Co-operation and Development (OECD) countries (South-North). South-South migration is significant in sub-Saharan Africa, as 70 percent of migrants actually come from other sub-Saharan African countries.

This rise in the number of economic migrants has led to a large increase in global remittance flows. As Figure 2 shows, remittances to low- and middle-income countries have increased and are expected to be higher than total foreign direct investment in 2019.

What does Russia really want from Africa? 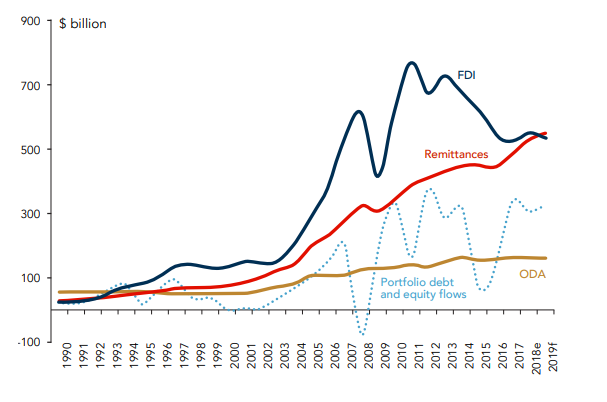 The high cost of transferring remittances reduces benefits for migrants and are highest when sending money to sub-Saharan Africa. The cost of transferring remittances has been dropping, as, in first quarter of 2019, it cost 9.3 percent on average to send $200 to sub-Saharan Africa, down from 13.1 a decade earlier (Figure 3). However, the costs of sending remittances are still higher in the region than elsewhere in the world. Notably, the report highlights that these costs are even higher when remittances are sent between developing countries. For example, sending money from Angola to Namibia costs 22.4 percent while the cost is 18 percent for remittances from South Africa to Zambia.

Figure 3: Average remittance costs: Lower than a decade ago, but still high

Migration can be a plus for low- and middle-income origin countries, as remittances have been shown to increase consumption and reduce poverty in developing countries. In addition, migrants accrue the greatest gains with increases in income, educational enrollment, and a reduction in child mortality along with a range of other benefits. However, this out-migration comes with drawbacks. Migrants face costs and discrimination, particularly in the labor market where they are often overqualified or underpaid for their work. For origin countries, brain drain—large outflows of skilled individuals—is often cited as a cost as some research has shown that it can lower the quality of institutions and business.