On June 23, British citizens will vote on a referendum determining the future of the United Kingdom and its place in the European Union. British voters will decide on whether the U.K. should “remain a member of the European Union” or “leave the European Union.” The “leave” supporters argue that the EU has seen tremendous changes over the year, thus diminishing the sovereign role of the U.K. and its influence. Conversely, the “stay” advocates argue that being part of a large regional community provides the U.K. with greater influence and security on a global scale. Consequently, they say, leaving the EU would have costly economic consequences.

The end of British outwardness

Perhaps the biggest impact of the Brexit on Africa would be the end of British “outwardness”—the country’s concern with and responsiveness to global development issues—which, from an African development perspective, reached its peak in 2005 with the U.K. presidency of the G-8. Indeed, at the G-8 Summit in Gleneagles, Scotland that year, leaders agreed to double aid to Africa and eliminate outstanding debts of the poorest countries. Indeed, one of the major successes of the G-8 U.K. presidency was the agreement to provide debt relief to the poorest African countries. The G-8 countries agreed to increase aid to developing countries by $50 billion a year by 2010 with at least half of this commitment going to Africa. Other commitments included increased support for African peacekeeping forces and additional investment in education and the fight against HIV/AIDS, malaria, tuberculosis, and other diseases.

Prior to the G-8 Summit, African leaders like the late president of Ethiopia, Meles Zenawi, and the then-South African minister of finance, Trevor Manuel, contributed to the 2005 Commission for Africa’s report, which was based on extensive consultation in Africa and elsewhere. Jump ahead 11 years, and the U.K. is the number-one funder of IDA17 (the concessional borrowing window at the World Bank) with about a 13.20 percent share.

The Brexit could lead to a retrenchment from outwardness with possible negative implications on the U.K.’s development initiatives. At a time when the process for IDA18 replenishment is underway, the Brexit may not be good news for aid recipients. Let’s have a closer look at the impact of the Brexit on bilateral development assistance.

An exit from the European Union would also have dire consequences for development assistance. In a recent article, Kevin Watkins, a Brookings nonresident senior fellow and executive director of the Overseas Development Institute (ODI)—an international development think tank based in London— highlights the consequences of the Brexit on development assistance. The U.K. is one of the biggest contributors to the European Development Fund, the EU’s development assistance arm, which provides funds to developing countries and regions.  The U.K. currently contributes £409 million—$585 million— making up 14.8 percent of contributions to the fund (Figure 1). The fund is one of the world’s largest providers of multilateral concessional aid, with disbursements exceeding ones channeled through the World Bank’s International Development Association (IDA). While a Brexit would deprive the EDF of British resources for development assistance, Watkins argues that the direct disbursement of aid—set to replace the U.K.’s contribution to the fund—from the U.K. to recipient countries will have a more narrow geographical reach than aid funneled through the EDF.

Not everybody agrees. In an interview with Radio France International (RFI), James Duddridge, British member of Parliament and “leave” advocate, states that development assistance would be more effective under a situation where the U.K. is not part of the EU. He states that when U.K. development aid is channeled through the European Development Fund, it is less efficient than when it is directly allocated to African countries through British organizations such as DFID. In addition, he stresses that in a post-Brexit era, the U.K. would increase security assistance to African nations. He gives the example of the EU reducing funds available to AMISOM (the African Union Mission in Somalia) by 20 percent—a decision the U.K. opposed. 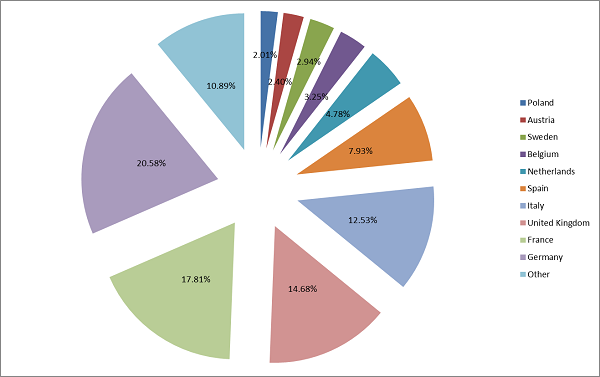 But the U.K.-African relationship is not just restricted to development assistance (which increasingly goes to fragile and low-income countries). How about the impact of the Brexit on bilateral trade?


Analysts have stated that the Brexit would weaken trade ties between the U.K. and African nations. The renegotiation of trade agreements can be a lengthy process, which could cause a decrease in trade volumes between the U.K. and Africa. Indeed, a Brexit would prompt the United Kingdom to renegotiate over 100 trade agreements.

Under the present umbrella of the European Union, the U.K. benefits from a myriad of trade agreements. In a recent interview, World Trade Organization Director-General Robert Azevedo stated that a Brexit would lead to unprecedented negotiations between the U.K. and the WTO’s 161 other members. Bilateral trade agreements signed between the EU, on one hand, and other countries and regional communities, on the other, would also have to be renegotiated. One example of such deals is the recent EU-SADC (Southern Africa Development Community) Economic Partnership Agreement. The agreement, signed on June 10, includes clauses on allowing free access to the EU market for select SADC countries (Botswana, Lesotho, Mozambique, Namibia, and Swaziland). The agreement also introduces more flexible “rules of origin,” with the aim of promoting the development of regional value chains. Within the European Union, the U.K. is one of Africa’s largest trade partners (Figure 2). The share of U.K. trade in bilateral trade between the EU and Africa has recently declined. The Brexit, followed with the annulment of trade agreements, could accentuate said decline. For instance, scholars from North-West University argue that the Brexit would cause a 0.1 percent decline in South Africa’s GDP due to the strong trade ties between the two nations. 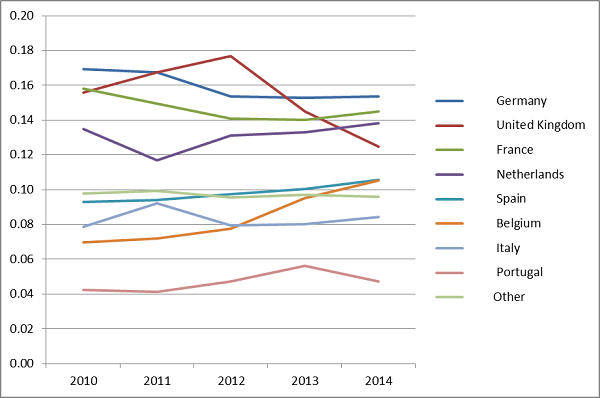 Another key issue that could be affected by the Brexit is one of agricultural subsidies. For years, the U.K. has criticized the current subsidies European countries have in place, which have hindered African farmers’ trade capacities. In his argument in favor of the “leave” option, James Duddridge voiced his concerns over the EU’s Common Agricultural Policy (CAP), which puts in place subsidy systems with harmful effects on African farmers’ competitiveness. With more than 60 percent of Africa’s economically active population working in agriculture, the subsidies take an important toll on the livelihoods of a majority of Africans. The U.K. has been a key opponent of the subsidies. In a situation where the U.K. was to leave the EU, there would not be a strong voice within the EU advocating for the livelihoods of African farmers.

In sum, there are a number of ways through which the Brexit could have an impact on African countries, starting with its impact on the global economy, reduced British outwardness when it comes to global development issues, as well as decreased bilateral development assistance and trade. They are all difficult to quantify but broadly point to a negative impact on African countries. The Brexit referendum is rather inopportune as African countries are facing serious external shocks such as the fall in commodity prices, an economic slowdown in China, and higher external borrowing costs. There is not much that they can do on the external front that leaves adequate and timely domestic policies the priority.