Regional economic integration has been an increasing priority among many African nations in recent years. Take for instance the Continental Free Trade Area Negotiating Forum (CFTA NF), which was convened for the first time in Addis Ababa on February 22-27. The CFTA aims to incorporate all 53 African countries, representing over 1 billion people and $3 trillion in GDP, and is set to launch in 2017. The agreement’s major aim is to boost trade among African countries. (See Chapter 5 of Foresight Africa 2016.)

The WAEMU is one of four existing currency unions in the world, the other three being the eurozone, the Eastern Caribbean Currency Union (ECCU), and the Central Africa Economic and Monetary Community (CEMAC). Created in January 1994, the WAEMU is composed of former French colonies (Benin, Burkina Faso, Côte d’Ivoire, Mali, Niger, Senegal, and Togo) and a former Portuguese colony (Guinea-Bissau) and is a stepping stone to further integration in West Africa. The eight WAEMU countries are also members of the Economic Community of West African States (ECOWAS), a group that also includes the six West African Monetary Zone (WAMZ) member countries (The Gambia, Ghana, Guinea, Nigeria, Sierra Leone, and Liberia) as well as Cabo Verde. In order to further promote regional integration in ECOWAS, countries are seeking to implement a common West African currency (the Eco) by 2020.

The WAEMU has an institutional arrangement with France where the CFA franc is pegged to the euro (currently at a rate of CFA 655.957 per euro) and the French Treasury provides an unlimited convertibility guarantee. In exchange for this guarantee the central bank of the WAEMU, the Central Bank of West Africa States (BCEAO in the French acronym), is required to deposit part of its foreign exchange reserves in an account with the French Treasury (Compte d’Opérations). Currently, 50 percent of the BCEAO foreign exchange reserves are held in the Compte d’Opérations and are remunerated at the European Central Bank’s marginal lending facility rate. These peculiarities of the WAEMU raise a number of questions for Africa observers.

Discussions about the WAEMU are often limited to questions about the degree of overvaluation of the real effective exchange rate and the level of remuneration of the central bank’s foreign exchange reserves. These are valid questions, especially as they relate to competitiveness and the opportunity cost of leaving foreign exchange reserves at the French Treasury. But they are not the only ones.  In this note, we explore a number of other questions to provide a greater insight on the nature of regional economic communities in Africa. (For more on this issue, you can also see this presentation given at a recent UNU-MERIT/CRES Conference in Dakar.)

1. To what extent does the WAEMU encourage trade and financial integration?

Even though the WAEMU was only created in 1994, countries in the region have been sharing a common currency since 1945, when they were French colonies (this excludes Guinea-Bissau, which was a Portuguese colony). Sharing a common currency, a common central bank, a regional real time gross settlement (RTGS) system, and a regional automated clearing house (ACH) has led to reduced transactions costs, thus promoting intraregional trade. Additionally, in 1996, the WAEMU countries removed tariffs and quantitative restrictions on intraregional trade. 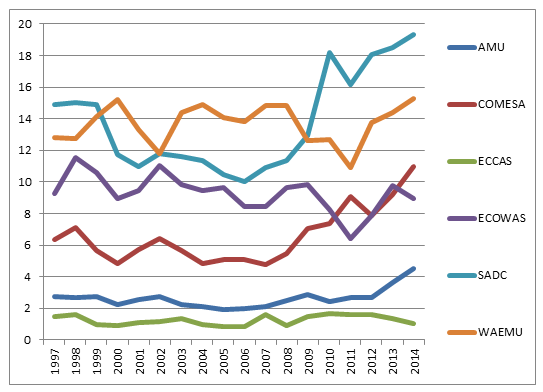 Many non-tariff barriers also impede intraregional trade in the region. Such barriers include: costly border procedures, weak governance, inadequate transport infrastructure, poor business environments, and irregular implementation of WAEMU rules of origins—used to certify products as being of WAEMU origin and tariff-free—among others.

Figure 2. Intra-regional exports as a percent of total exports, EU, ASEAN, and WAEMU 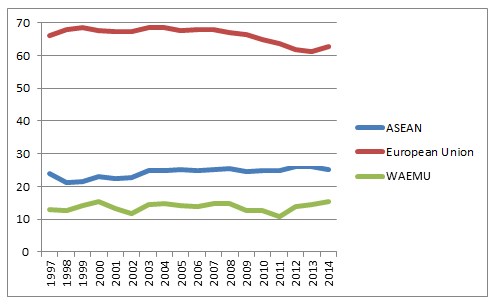 
2. How do the WAEMU countries compare to other sub-Saharan African countries in terms of macroeconomic stability?

Similarly, this steadiness was quite noticeable during the 2009 financial crisis where the peg served as a stabilizing factor. Recently, as several countries in sub-Saharan Africa with floating exchange rate regimes—notably Nigeria and South Africa—have seen their currencies depreciate in the face of a deteriorating external environment, the CFA peg to the euro has provided macroeconomic stability to the region. A legitimate question, however, is whether stability has not been achieved at the expense of a loss of competitiveness. 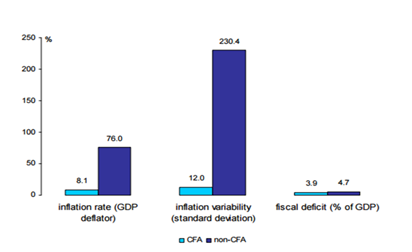 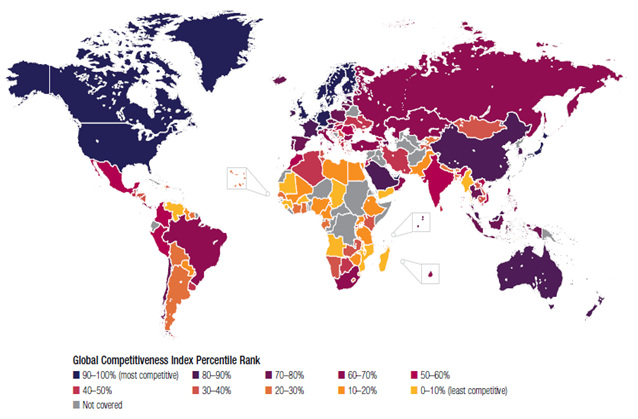 
One explanation is that structural barriers in the region, such as a relatively poor institutional environment and underdeveloped infrastructure, have contributed to the inability of the region to attract capital and diversify the economies. When assessing the ease of doing business, the WAEMU is performing relatively worse than the African region as a whole. Figure 5, wherein the WAEMU countries tend to rank far lower than the Asian and African benchmarks, illustrates this trend. While the fixed exchange rate system has contributed to the lag, structural factors have taken a toll on competitiveness in the region. 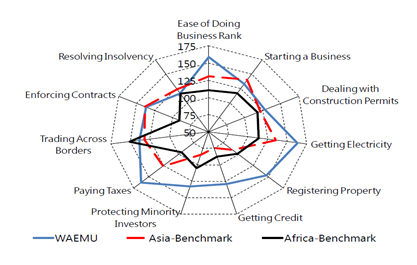 4.
How has the WAEMU promoted economic convergence among member countries?

Convergence— defined as the reduction of disparities in economic indicators, i.e., inflation, growth levels, and per capita income—is one of the key goals of currency unions. The idea is that, if achieved, convergence makes countries react in a similar way to common shocks, which makes a common macroeconomic policy to manage such shocks more effective for all countries.  For example, in order to adopt the euro as their currency, EU member states are required to meet the “Maastricht criteria,” which requires economies to meet certain macroeconomic benchmarks relating to price stability, budget deficit, and debt-to-GDP ratio.

Table 1: Compliance with new convergence criteria, number of countries non-compliant with criteria (out of 8)

Going beyond a common currency: The necessity of structural transformation and macroeconomic stability

To increase competitiveness, countries will need to not only ensure macroeconomic stability but also improve the business climate, reduce the hard infrastructure gap, and invest in soft infrastructure such as skills and technology. Structural transformation is needed and the example of Côte d’Ivoire, which has increased agriculture yields above two tons per hectare, should be emulated. To do so, countries will need to invest in rural infrastructure and adopt policies to increase regional and global trade. Increasing farmers’ productivity will require strengthening training and extension programs. Structural transformation will also require industrialization policies to go beyond investment climate reforms and promote exports with both regional and global value chains, build capabilities of domestic firms, and foster industrial clusters. Last but not least, structural transformation will require a better understanding of the services sector and the factors that shape it. It will require leveraging the success in the ICT sector to increase productivity and access to finance. Finally, in preparation to the planned integration with the WAMZ—which includes Nigeria, a major oil-exporter—regional trade, financial ties and domestic macroeconomic frameworks will need to be strengthened.