Expanding formal financial services—including traditional services (offered by banks) and digital services (provided via mobile money systems)—to individuals previously excluded from their access can improve their capacity to save, make payments swiftly and securely, and cope with economic shocks. Importantly, having access to financial services is also considered a critical component of women’s full economic participation and empowerment. Many countries, therefore, are working to increase accessibility to and usage of formal financial services as important strategies to improving individuals’ financial stability and, at a macro-level, supporting inclusive development and growth.

In sub-Saharan Africa, where the provision and uptake of traditional financial services is limited due to a wide range of factors (including poverty, lack of savings, and poor infrastructure, among others), a number of governments are working to promote digital financial service offerings by creating an enabling environment for various entities (including bank and non-bank formal providers) to offer them. In turn, the region is leading global progress in the adoption of digital financial services: 12 percent of sub-Saharan African adults have a mobile money account (nearly half of whom exclusively use digital services) compared with only 2 percent of adults at the global level. In fact, in five African countries (Cote d’Ivoire, Somalia, Tanzania, Uganda, and Zimbabwe) more adults have mobile money accounts than have conventional bank accounts.

In the first of a series of publications exploring and sharing information that can improve financial inclusion around the world, the Brookings Financial and Digital Inclusion Project (FDIP) takes stock of progress toward financial inclusion in 21 countries from various economic, political, and geographic contexts and scores them along four key dimensions of financial inclusion: country commitment, mobile capacity, regulatory environment, and adoption of traditional and digital financial services. The interactive rankings and report were launched on Wednesday, August 26 at an event entitled, “Measuring progress on financial and digital inclusion.” According to the report’s findings, four out of the five top-scoring countries are located in sub-Saharan Africa. On the other hand, some of the lowest ranked countries were also African, demonstrating regional diversity in the pathways toward financial inclusion and their subsequent outcomes.

Here are some of our main takeaways from four of the nine African case studies featured in the report: Ethiopia (ranked #21 overall), Kenya (ranked #1), Nigeria (ranked #9), and South Africa (ranked #2). Kenya and Ethiopia are the highest- and lowest-ranked African countries in the report, respectively, while Nigeria and South Africa represent the continent’s two largest economies, which have achieved disparate outcomes in terms of financial inclusion. (For the overall rankings of the nine African countries included in the report, see Figure 1.) 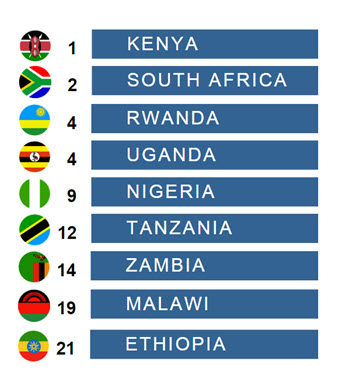 So what’s next for expanding financial and digital inclusion?

The FDIP case studies offer a number of insights into the policies and frameworks conducive to the uptake of formal financial services. In several of African countries considered to be mobile money “success stories,” for example, in Kenya (also see the Rwanda country profile in the report), mobile network operators play a substantial role in spearheading the drive toward financial inclusion and have collaborated closely with central banks, ministries of finance and communications, banks, and non-bank financial providers. Ensuring the participation of all stakeholders—not just governments and banks—in setting the national financial inclusion priorities and agenda, then, is critical. Furthermore, actively participating in multinational financial inclusion networks can enhance knowledge-sharing among members and lead to further country commitments. Finally, leading surveys of the national financial inclusion landscape can also help governments and financial service providers better target their strategies and services to the local needs and context.

Effective engagement with Africa: Capitalizing on shifts in business, technology, and global partnerships

Technology and the future of jobs in Africa